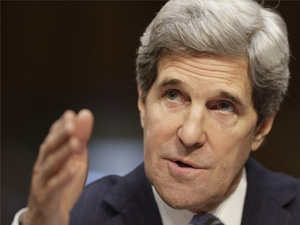 Now that President Obama’s second term has officially begun, his newly appointed cabinet officials will begin their jobs as well. Despite some of the heated political debate of the Senate confirmations of President Obama’s Secretary of Defense, Chuck Hagel, another senior-level cabinet member’s significance has slipped through the talk of mainstream media roundtables; Senator John Kerry’s appointment as Secretary of State.

Kerry’s appointment is important to note because it veers from a pattern upheld by the last few people to hold this position. With the exception of Colin Powell as the first African American man to hold the position, the most recent Secretaries of State — Madeline Albright, Condoleeza Rice and Hilary Clinton – have all been women. This warrants the question: is foreign policy a woman’s job? It makes you wonder how John Kerry will live up to the legacies of these strong and virtuous women.

Despite the fact that it does not really matter what America’s top diplomat looks like, it really comes down to the job. However, it does put forth two things: (1) it goes to show that although women are underrepresented in the US Government, this top position in the last two decades was shaped more by women than anything else and (2) what John Kerry and any future Secretary of State does from hereafter is done with the criteria created by Albright, Rice, and especially Clinton.

Kerry himself has recently posed the question, “Can a man actually run the state department?” then went on to say, “I have big heels to fill.”

Madeline Albright presided over high times in the Clinton administration. She is well-known for her efforts of peace in the Middle East and her actions during the Rwanda genocide. Rice presided over relations with Russia and more notably over the surging and the keeping of troops in Iraq and Afghanistan. Clinton has logged more flight miles than any other Secretary of State in history (over one-million). She presided over the raid to kill bin Laden, the Benghazi scandal, and, in her million miles to foreign nations, worked tirelessly to maintain relationships and restore America’s image around the world. Kerry now must continue this legacy.

It is obvious Kerry is more than qualified for the job. He was a prominent and influential Massachusetts senator, a position he held for almost three decades, and notably ran a Presidential bid in 2004. However, now after seeing the heated exchanges between Clinton and the Senate Committee at the Senate hearings on Benghazi, Kerry has to know how to be briefed and take charge of America’s diplomatic policies and relations. He stated in an interview that he is approaching the position with a mission to make the world safer and more prosperous. More specifically, he has noted that he wants to address the Palestinian-Israeli conflict.

As the son of a former diplomat and a member of the Senate Foreign Relations Committee for 28 years, Kerry unsurprisingly seems to find doing foreign missions for conflict management and peace his expertise.  However, Kerry and the Obama administration must face the grim reality of addressing some major foreign policy issues, and some lingering questions.

There is no dearth of foreign policy issues for Kerry and his department to begin working on. The most recent conflict between Hamas and Israel in November 2012 coupled with the elevated status for Palestine by the U.N. have complicated relations between Israel and Palestine. In the wake of the Benghazi hearings, the State Department must work to maintain the promise to protect U.S. Foreign Service workers from terrorist attacks overseas. Kerry, as the head of the State Department, must also take the lead in further strategizing how the U.S. will address the forthcoming withdrawal of troops from Afghanistan, the rising terrorist threats and organizations in North Africa, and the possibility of a civil war in Syria along with dealing with a confrontation with Iran over its nuclear program.

Undoubtedly, Kerry will run the State Department smoothly and help shape the vision of US Foreign Policy for the next four years. As more international issues arise, the world will watch how Kerry and the administration reacts and addresses the problems and, more importantly, how he stacks up against the women who made this position both more desirable and difficult.