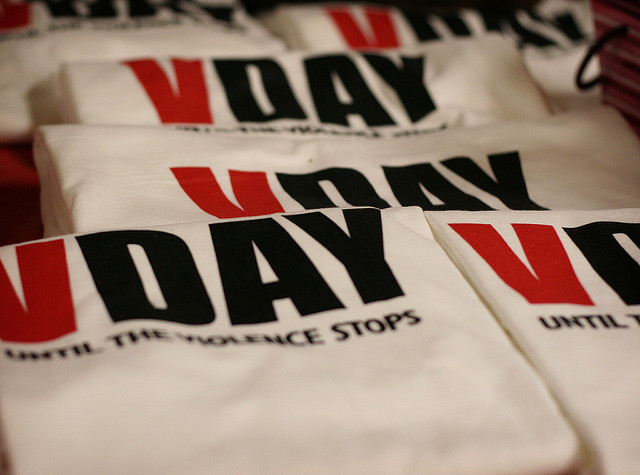 I will never forget the first time I saw a performance of Eve Ensler’s Vagina Monologues. My sister had invited my entire family to see her participate in her college’s rendition of the critically acclaimed play. I left the performance feeling invigorated, empowered and inspired, completely ignoring all of the many legitimate criticisms that my pious Muslim mother attempted to bring my attention to at the time.

As the hijab-wearing, politically aware, suburban high school sophomore that I was, I was convinced that this performance and V-Day more generally were emblematic of the kind of work that needed to be done to confront the gender inequalities that give way to violence against women.

Looking back, I understand both my mother’s and my own perspectives.

While I was hyped up from the ‘freedom’ with which female sexuality was expressed, my mother felt uncomfortably oppressed by a language that reduced women to their sexual organs. Growing up in a culture where male sexuality is expressed so casually and overtly, I found the Vagina Monologue’s strategy equalizing. My mother, always critical of the hypersexuality of American culture, felt that this strategy only objectified women more.

I recognize now that my own perspective was, in a way, deeply flawed- not because of my desire for freer expressions of female sexuality (which I still stand by), but because of my self-righteousness and my inability to listen to and accept my mother’s perspective. In my dismissal of my mother’s voice, I embodied the kind of imperialist feminism that threatens mainstream American feminism today- an imperialism I believe campaigns like Ensler’s V-Day perpetuate.

It is because of imperialist overtones that I think that women like my mother feel uncomfortable labeling themselves as ‘feminist,’ despite their passion for addressing violence against women and gender inequality more broadly. Mainstream American feminism does not leave room for women like my mother. And, in complete honesty, as I’ve developed my politics further, mainstream American feminism does not leave much room for me either.

Before I delve into the contemporary cross-section of feminism and imperialism, I want to point out that V-Day and organizations like it have done a great a job of bringing awareness to the phenomenon of violence against women and girls. I commend international women’s organizations for the work they do, but I feel I must also express my criticisms in the hopes that they will encourage greater dialogue and a more inclusive, compassionate feminist mindset. I do not wish to fracture the feminist movement, but instead I hope to bridge the colossal gaps created by myopic views of women’s rights and monolithic images of women’s experiences abroad.

Central to my criticism of international women’s work like Ensler’s is the message sent about women in non-white regions of the world. Ensler maintains this image of women of color as perpetual and helpless victims of their seemingly isolated cultures of color, not only in the very few sketches of the Vagina Monologues in which women of color are actually represented but more broadly in V-Day’s ‘spotlight campaigns.’

In the last decade, Ensler has called attention to the plight of women “Under the Burqa” in Afghanistan, women subject to female circumcision in the DRC (a contentious topic which, despite what mainstream American feminism might have you believe, has many feminist perspectives), and women fighting the rise of religious extremism in Iraq (a problem that is directly linked to US military intervention and occupation).

I do not doubt the severity of these women’s struggles, but I genuinely worry about the way that V-Day depicts these women and their cultures. And I genuinely worry for those well-intentioned people who hear these stories without ever having had any introduction to that region’s broader cultural fabric.

Because most people know little more about Pakistan than the violence and misogyny described in mainstream American culture, I find myself consistently having to confront people’s misconceptions of Pakistan, its people and its culture:

“No, not all women in Pakistan have to wear that…No, not all Pakistani men hate America…As a matter of fact, my Pakistani female cousins are pursuing degrees in law and medicine in Pakistan….” I recognize that it is because of my knowledge of Pakistan and its culture that I have developed a critical lens through which to filter mainstream media’s images.

That is precisely why I am fearful for those who do not have personal experiences or knowledge outside of what is fed them. When you consider books like Half the Sky, Reading Lolita in Tehran, and mainstream news more generally, it becomes easily discernable how women of color in parts of the so-called ‘developing’ world are consistently represented as victims of monolithic, ‘backwards’ cultures. Much like the white savior industrial complex that has developed in light of human rights discourses in contemporary politics, a feminist savior industrial complex has sprung out of mainstream attempts to address international women’s issues.

Images of women as victims of violence and oppression abroad elicit pity in Western readers for their non-Western female counterparts. Pity, as opposed to compassion, depends on a hierarchy of experience whereby we, as Western, sometimes white, feminist-minded consumers, observe the experiences of women around the world as not only outside of ourselves, but also below our own. Subconsciously, or even consciously for some, we begin to assume that “our” culture here in the west is better than theirs; we forget to acknowledge that cultures are neither monolithic nor completely isolated.

The kind of orientalization that we do to these cultures, a simultaneous exoticization (us versus them) and subjugation (‘well, we’re better than that’), feeds into political structures of dominance that give way to colonialism and war. When people become angry and backlash against Western cultural and political interventions with religious extremism and violence, we suddenly dehistoricize the issue and gasp at their ‘backwardsness.’ The mythical binary of West versus East, first critically analyzed by Edward Said in his 1978 classic Orientalism, fuels much of the hatred and narrow-mindedness that exists in today’s international political climate.

Mainstream feminisms unknowingly perpetuate this harmful binary and its ingrained hierarchy by offering images of women’s oppression without nuance and without demanding self-awareness. Indeed, the type of feminism that V-Day epitomizes, and that many other women’s organizations unfortunately embody, does not ask us to recognize the privileges that exist beside our diverse experiences with oppression. It does not ask us to engage in dialogue with ourselves about how our privileges might subjugate others. It does not ask us to recognize our own complicity in mechanisms of power that give way to misogyny in other parts of the world.

For example, we cannot justly view the plight of women in (Saudi) Arabia* as outside the decisions we make to sit by and let our government remain politically and economically allied with the misogynist and corrupt Saud family. If we uncritically absorb images of Saudi women as victims of a monolithic culture, we not only disempower them by framing them as victims (ignoring the fact that many Saudi women are actively fighting for their own freedom) but we also remove responsibility from ourselves, disempowering ourselves from making the kind of political moves that are appropriate for us to make without assuming an imperial international stance.

It is through greater self-awareness, its resulting humility and compassion, and increased dialogue that we can heal mainstream American feminism of its myopia.

In light of these reflections on V-Day and the state of mainstream American feminism, I ask of my fellow feminists: Let not feminism become a tool of Orientalism. Let not ‘feminism’ become a reason for war and military occupation (as was expressed by Laura Bush after the invasion of Afghanistan). Let not feminism become a word that is only relevant to a small portion of the world’s population, my mother not included.

Instead, let feminism incorporate self-awareness and compassion into its politics. Let feminism become an arena of discussion and dialogue, where people from diverse backgrounds can express their different experiences and beliefs. Let feminism exist in its multiple forms; let it recognize that notions of women’s freedom and equality vary around the world and that one culture’s idea of women’s rights should never be imposed on another.

The next time you see an image of an oppressed woman in Bosnia, in Somalia, or in India, turn your gaze inwards and ask yourself what role you have played in creating a situation where these women have been victimized. By all means, reach a hand out to those organizations, especially the local, grassroots ones, that are working to address the issue, but also recognize that patriarchy is a structure of dominance that is intertwined with other harmful structures of power- and each one of us, especially here in America, benefits from those structures of power in some way or the other.

*Please note, I do not like to refer to Saudi Arabia as such without calling attention to the fact that the Saud family has ridiculously inserted its family name into the title of a region with religious and cultural significance that significantly predates (by centuries) their family.