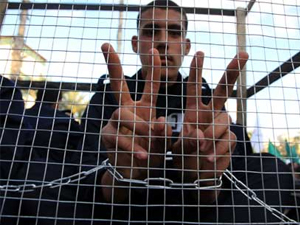 Israel has, once again, asserted its position as the beacon of democracy in the Middle East, promoting a policy of “guilty until proven innocent” with its Palestinian prisoners. And, once again, the United States media’s coverage of the occupying state’s policy has been anything but fair.

Many Palestinian prisoners – men, women, and children – have been thrown in Israeli prisons indefinitely and without charge, separated from their families and their homes in the occupied areas. Many are held in solitary confinement, where conditions are unjustifiably unsanitary and unbearable. To further humiliate Palestinians, many discharged prisoners are arrested again within a short time of their release. Many Palestinians have even resorted to hunger strikes in Israeli jails to protest the unjust and inhumane conditions under which they are detained.

The provisions of the Sixth Amendment of the US Constitution are not unique to America alone; the right to a fair trial is understood in democratic countries around the world today. Yet again, an Israeli policy calls into question its ability to be considered democratic: if Palestinians are regularly arrested without charge or trial, can Israel really consider itself democratic?

Israel has held prisoners in solitary confinement, where the conditions are unsanitary and inhumane. A recent report from Ma’an describes a Gazan man, Dirar Abu Sisi, who was kidnapped while working in Ukraine. He was subject to solitary confinement for over two months, where he began to lose his ability to “recall language” and where he was given rotten food to eat.

Arguably the most humiliating Israeli practice towards Palestinian prisoners has been one in which prisoners are released, only to be re-arrested within a short time (sometimes within days or weeks). These practices are consistent with other Israeli policies, like home demolitions and the use of checkpoints. They are aimed to destroying hope and creating a sense of despair among Palestinians, who have resisted such brutality day after day, year after year.

The likes of Hana Shalabi, Khader Adnan, Mahmoud Sarsak, and most recently Samir Issawi have received some coverage for their hunger strikes; they have sacrificed their health and put their lives in danger to highlight the discrimination they have been subject to under Israeli policy. Thousands of Palestinian prisoners have followed the lead of those brave individuals, sending a message to Zionist policymakers that the Palestinians will continue to resist their brutality.

Naturally, coverage by the media of these abhorrently nondemocratic policies (and the resulting hunger strikes) in the United States – Israel’s superpower ally and the supposed “honest broker” for peace in the region – has been spotty at best. Reporting in the mainstream media, if there is reporting at all, has covered the details of specific hunger strikers but, overall, has been unable to properly contextualize these events. The purpose of the hunger strikes is not, as Samir Issawi notes, to draw attention only to their personal struggles with Israeli law enforcement, but rather to fight “a battle for all Palestinians against the Israeli occupation.” Similarly, teenagers did not sit-in at Woolworth’s simply because they wanted to exercise their right to eat food at whichever counter they pleased, but rather because they hoped to bring attention to the broader issue of segregation and the lack of civil rights for black people across the United States.

The paradigmatic attitude in the United States towards the Palestinian-Israeli conflict has been one that favors and supports Israeli security; subsequently, the silence from American politicians and media can be attributed to the fact that the indefinite detention without charge of these Palestinians is in the name of Israeli security. According to the U.S. State Department, “U.S. security assistance to Israel acknowledges strong bilateral ties and reflects the unshakable commitment of the United States to Israel’s security”; a commitment that includes over $3 billion per year, or $8.5 million per day. This support is not only unjust, but actually hinders the possibilities for peace – something the three parties involved can ill afford.

While highlighting the stories of these hunger strikers is necessary to remind Americans that they are monetarily sponsoring the Israeli policy that is lessening the chance for peace in the region, perhaps it would be more efficient to accurately portray the occupation’s effects – poor water access, poor electricity access, restricted movement, home demolitions, military occupation, low employment levels, etc. – to help us better understand why a peaceful resolution has not been reached.

As the harsh conditions of Israeli prisons continue (Israeli torture of Arafat Jaradat, a young Palestinian prisoner, resulted in his death last week), it is imperative that we consider the other medians through which Palestinians have resisted. The overarching goal of Palestinian resistance is not to destroy Israel, as some propagandists would claim, but to live in peace and prosperity. In the meantime, hunger strikers – led by Issawi and others – will continue their efforts to end indefinite detention without charge.