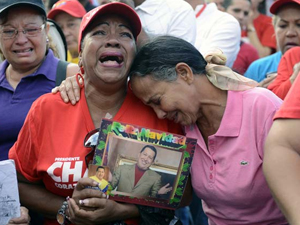 The recent death of Hugo Chavez brought forward a wave of international grief and controversy for the late Venezuelan President who has been an integral part of Latin American politics. In much of the world’s news coverage, Chavez is remembered as a revolutionary leader who empowered the poor. In the U.S., however, much of the mainstream corporate media has rushed to define his 14 year legacy as a “dictatorship” and attempts to portray his followers as “evil communists.”
Relations between Venezuela and the U.S. suffered during the Chavez era. The U.S. House Committee on Foreign Affairs said that, “Chavez was a dictator and tyrant who forced the people of Venezuela to live in fear” and continued to condemn Chavez as a socialist. Moreover, the Associated Press recently published an article criticizing Chavez for spending his country’s oil wealth on “meager” social programs including free health clinics, education, and housing for the poor. The article suggests that instead, Chavez should have followed the example of other oil rich nations and built skyscrapers and lavish monuments for his people.

Many would argue that applying revenue generated from natural resources towards social programs to benefit the poorest sector of a nation is the farthest thing from “evil” or even “communist.” In addition, it is also complete propaganda to define a democratic nation as a “dictatorship” considering the fact that Hugo Chavez was fairly elected by the majority of the Venezuelan people.

After all, Chavez did not invade nations, overthrow governments, commit mass murder, torture, or starvation through sanctions, and neither was he credibly accused of a single political murder. This leads us to question why the U.S. and the western corporate media upholds a blatant bias towards a revolutionary leader who apparently granted his people health care, education, improved literacy, increased minimum wage, and cut poverty by 50% using his country’s own natural resources.

Maybe it’s because Chavez was an outspoken critic of U.S. imperialism. He rejected the Monroe Doctrine, spoke forcefully against globalization, dared to nationalize industries in which Americans were heavily vested, and attempted to build an alliance between Latin American governments. Most of the controversy surrounding Hugo Chavez may just be a smear campaign designed to distract from the real geopolitical stakes in that region.

John Perkins, the author of “Confessions of an Economic Hit Man” writes that “Venezuela is a classic example of a country that rose from rags to riches as a result of oil. It is also a model of the turmoil that oil foments, the disequilibrium between rich and poor, and of a country shamelessly exploited by the “corporatocracy,” which is an economic and political system controlled by corporate interests.”

“One of the fundamental reasons that the developing world is so poor is that states have been unable to take a reasonable share of the economic benefit due to exploitation of their natural resources. This is because multinationals bribe corrupt politicians for the rights of the natural resources at little purchase cost and low taxation,” writes Craig Murray, a former Ambassador and human rights activist. “Chavez’ overwhelming achievement was that he successfully applied, in a developing country, the international law doctrine of a state’s inalienable right to its mineral resources, as declared by the UN General Assembly in 1968,”

Hugo Chavez was antagonistic with U.S. oil companies and eventually kicked them all out, taking over the Venezuelan oil industry and winning the hearts and minds of the economically impoverished in his country. Chavez symbolized a new assertiveness and self-consciousness in Latin America that made the people see a future for themselves in which they were liberated from the economically-draining policies of the U.S. For much of the world, he proved that an oil rich nation could survive without clinging to the U.S. or an International Monetary Fund.

Another geopolitical factor to consider is the fact that Hugo Chavez played an integral role in forming the “Bolivarian Alliance of the Americas,” which is an economic and political alliance between Latin America and the Caribbean. The alliance discussed plans to create a regional currency, which would ultimately threaten the U.S. Petrodollar.

Overall, Chavez did not fit the mold of a traditional tyrant or dictator and there are far more truly oppressive governments currently in power that the U.S. does not care to get involved in. It may be fair to conclude that the U.S. and the corporate media were not actually against Hugo Chavez and his so called “leftist” policies rather, against his threat to U.S. corporate interests.