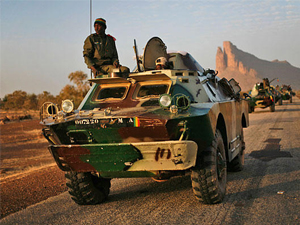 Since January, American news outlets have been flooded with stories about France’s two month campaign to oust a group of Islamic terrorists that had recently gained total control over the northern region of Mali.  Reports of ghastly violations of human rights coming from these areas under rebel control, along with France’s claim to be fighting Al-Qaeda-linked extremists, may lead many of us to conclude that this is a rather black and white conflict.  But a closer look into the ongoing conflict in Mali reveals a much more complex situation, which muddies the black and white rhetoric.

Though this conflict only recently gained popularity in mainstream news outlets, its origins stretch back nearly 50 years.  Following the collapse of French colonialism in northern Africa, many new states were formed.  However, these new states—drawn up on maps by the former colonial powers—hardly respected ethnic boundaries in the region, leaving the Tuareg people split between Algeria, Libya, Mali, and Niger.  The lack of national autonomy, along with a series of atrocities committed against them, led the Tuaregs to rebel.  Fighting for a homeland rich with natural resources, Azawad, the Tuaregs soon came to be considered the number one security threat to the young countries they had been split amongst – “The fact that Tuaregs are one of the world’s poorest and most isolated people living atop some of the world’s richest resources only fuels the fear…”

It was in response to the Tuareg uprising, coupled with the fear of a military coup, that former President Amadou Toumani Toure (ATT, Malian President from 2002 to 2012) began to prop up local militias in return for their support against the Tuaregs.   During this time, reports suggest that ATT diverted Western aid meant to fight Al-Qaeda to these militias, also allegedly allowing them to traffic drugs and ransom Western hostages.  Even after many of these groups became officially recognized by Al-Qaeda, ATT continued to provide a safe haven and financial support for these groups.   According to residents of Azawad, “Mali facilitated al-Qaeda, providing them complete freedom of movement among our families because they believed the presence of this group would impact the Tuareg struggle against the governing regime…”  Before long, these militias had become a part of everyday life in Mali, parading fully armed in front of police and military headquarters.

Following the fall of the Gaddafi regime in Libya, the French saw an opportunity to open up Mali’s vast wealth of natural resources to Western markets.  Reports suggest that, upon organizing and arming Tuareg separatists in Libya, the French directed these fighters to capture Azawad and establish a new Tuareg state friendly to the West.  According to Boubacar Boris Diop, a Senegalese intellectual, “These strategists knew very well that this would lead to the collapse of the Malian government and the division of its territory. But this did not make them hesitate for a second.”  The Tuareg movement swept across Northern Mali, swiftly capturing town after town from the poorly-equipped Malian military.

The Malian soldiers, finally fed up with their inability to slow the Tuareg advance, staged a coup and overthrew ATT.  These events provoke the militias funded by ATT to fight for their very existence (their main political and financial backer having been deposed), eventually retaking all the land lost to the Tuaregs.  Without ATT to answer to, the militias claimed the territory for themselves, pushing ever closer to Bamako, the nation’s capital.  Following the fall of Kona, the French declared they could no longer sit by and watch the North African nation become overrun by Al-Qaeda linked rebels.  In January, 4,000 French soldiers landed in Bamako to support the new government’s military in the fight for survival. But, as Boubacar Boris Diop put it, “France clearly occupies the role of a pyromaniac firefighter. Everything suggests that the French will defeat the jihadists, but this victory will cost the Malians their government and their honor.” Essentially, from Diop’s perspective, France has supposedly incited a regional conflict in hopes of securing vast amounts of natural resources, showing little concern for the stability of the region. He points to France’s refusal to intervene in a conflict in the Central African Republic, another former French colony (lacking the vast natural resources of Mali), as evidence of France’s true intentions.

But will this conflict only cost Malians their government and honor?  Will Mali be the only state in the region affected by this ongoing conflict?

Though Ansar Dine and the other Islamic militias initially showed few signs of serious resistance, in recent weeks they have returned with a vengeance, conducting several large scale assaults on Gao with both guerrilla soldiers and suicide bombers – the latter being a first in Malian history.  As these rebels take up positions in remote mountainous posts near Mali’s porous borders, where a protracted resistance seems likely, a situation resembling that of Afghanistan seems to become more and more a reality.  Already, France has extended what was supposed to be a quick intervention twice, recently announcing that its forces would remain in Mali until April.

The prolonged presence of Western forces, along with the degree of destruction being dealt to Mali’s infrastructure, has led many to believe that this conflict may lead to greater insecurity and destabilization throughout the region, igniting a “war of shadows.”  According to Jonathan Marcus, a BBC diplomatic correspondent, the type of war that would be needed to defeat these rebels would be similar to that which the US has waged in Iraq and Afghanistan – a war that France alone does not have the means to maintain. One should also remember that, even with the technological capability to wage such a war, the United States has hardly been victorious in the wars it has fought that resemble this conflict.

Despite France’s insistence that this will still be a “swift” operation, all signs seem to suggest that the annihilation of Ansar Dine and other related militias is far from over.  With ever increasing levels of destruction and human loss, the future will most likely witness an escalation in the ferocity with which this conflict is fought, serving to fuel further instability throughout the region.  And though the claim by France to be fighting Al-Qaeda linked rebels is true, that does not make the distinction between the good and bad in this conflict an easy one to make.