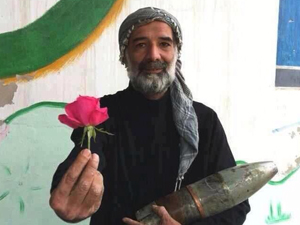 Everywhere in the media nowadays you hear or read news about Syria. When you read words like revolution, martyrs, shelling, uprising, conflict or crisis, the first thing that comes to mind is probably Syria . The Syrian people are being pulled apart by the conflicting interests of several countries. Therefore, each country’s media is trying to display the Syrian revolution in a way that corresponds with their country’s own interests and political stance.

Since the very first days of the revolution in March 2011, the Syrian regime has not allowed news agencies to enter Syria and to cover the peaceful protests. The regime does not want the world or its supporters to see the real uprising of Syrians and their rightful demands, so it can oppress, detain or kill the protesters in silence.

Despite this, social networks played a significant rule in the Syrian Revolution. Protesters have recorded their own videos for protests or funerals of martyrs and have uploaded it right away on the internet; this has compelled the regime and its supporters to distort the truth and fabricate news in favor of the regime and Bashar Al- Assad.

The Syrian National TV channel did not show any of the protests that called for freedom, justice and toppling the regime; it just kept trying to show the normal pace of life in Syria, denying the unrest in many cities and claiming that all people love Al-Assad and his regime.

After the formation of Free Syrian Army, media outlets controlled by the regime and its supporters, including Iran, Russia, Hezbollah and some other countries, have been presenting the revolution as terrorist or fundamentalist groups. As they claim, these groups have been financed by countries in the Gulf to kill civilians and break down the unity of the Syrian land, acting as puppets for the United States and one of its closest allies, Israel.

The Syrian Army, they allege, is merely defending the country from these “armed gangs” attacks. In reality, the dynamic is quite the opposite; the army which is supposed to protect Syrians is cruelly killing them and bombing their houses and villages where their only guilt was demanding freedom.

News channels often describe the same event in disparate ways, depending on the country or party supporting it. Words used in the media are picked very carefully to influence the audience in a certain way.

For example, when talking about the Free Syrian Army (FSA), SANA (Syrian Arab News Agency). –an agency managed by the regime – uses “terrorist groups” or “armed gangs’, while Al Jazeera, the leading supporting channel of the Syrian Revolution- uses FSA or ‘the revolutionaries.” While these two news sources represent extremes, there are more subtle differences. For example “the Syrian rebels” term is used by The New York Times when talking about the FSA, while Hezbollah T.V. channel “Al-Manar” labels FSA as “armed groups” and relies on SANA’s news.

It is known that the media is not “free” and has an agenda whether it is hidden or open, even when it is calling for human rights and freedom of peoples. The BBC seems to aim for “neutrality” somehow by having speakers pro the regime and others with the revolution.

However, I became aware of the BBC’s lack of neutrality when I watched a documentary produced by BBC and done by Dan Snow about the history of Syria. In it, they seem to legitimize Assad’s regime and present it as the only authority capable of protecting minorities and preventing the division and destruction of the country.

The fact that a BBC journalist was allowed into Assad’s home village “Qardaha” in the current situation raises many questions. Since when are journalists allowed to report freely around Syria? How was Snow able to meet Bouthaina Shaaban (the political and media advisor of Bashar Al-Assad) and have a chat with her in such a critical time? In my opinion, such media networks are trying to refine the criminal character of the regime and Assad family. I believe they intend to do this because the countries they represent prefer the certainty of alliance with the Assad regime over the uncertainty of the regime that could take over, who could represent a potential threat.

Other media channels supporting the revolution also do not report in the same manner. They might choose to report on certain events in order to push the agenda of the country financing the channel. AlArabiya channel- a widely watched channel in the Middle East- stands against the regime because it is funded by Saudi Arabia, a country on bad terms with the Syrian regime’s most prominent ally, Iran.

The U.S. and Western media in general are dealing with the Syrian revolution in a quite similar manner. They make clear statements against the regime of Bashar Al- Assad , condemn its brutality and show part of the suffering of the Syrians domestically or outside the country. However, they are propagating the idea that most of the FSA are ‘Islamist’ or ‘jihadist’ groups that the international community must be wary of.

I personally believe that the U.S. media concentrates on ‘Islamist’ groups or these groups they claim are affiliated with Al Qaida disproportionately more than the majority’s revolution for freedom and dignity; without this focus on potential threats, the US government could not justify its reluctance in arming the FSA and helping the Syrian people. It is shameful to be more worried about the length of the fighters beard than the genocide of innocent men, women and children all over the Syrian land.

The language used by media outlets plays a vital role in influencing the public perception of the Syrian revolution. Simple words or terms often drag your attention away from the legitimate concerns that revolutionaries are seeking to address. When we read headlines and articles about the conflict, we must not forget that the media is always biased and often serves some political agenda; sometimes, too, the media’s portrayal undercuts the importance of the events.

When news sources refer to the conflict in Syria as “the Syrian civil war” or the “Syrian conflict,” they belittle the sacrifices of many heroic Syrians by effectively disregarding the core motive behind the revolution. A revolution that ignited against the tyrant of the century, a revolution that let me love Syria as I never did before.

No matter how hard some countries try to extinguish the light of our revolution and leave the Syrians to drown in their own blood, Syrians will not stop pursuing their dreams to live in peace, rebuild their country and raise their children with love.