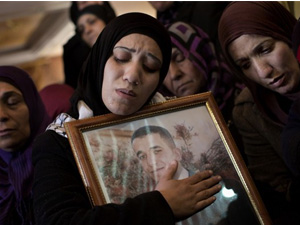 Jaradat had been arrested on February 18 for allegedly throwing a stone at an armed Israeli soldier near the illegal Kiryat Arba settlement near Al-Khalil in the West Bank. He had been transferred to Megiddo Prison shortly after the arrest where he faced hours of interrogation and beatings.According to a statement released by the Shin Bet, Jaradat had been examined by physicians “numerous times” to deem him healthy enough to continue with the interrogation. The Shin Bet also noted that Jaradat suffered from health problems sustained after being hit by a rubber bullet and tear gas canister fired by Israeli soldiers, yet the the procedure continued.

The Israel Prisons Service commented briefly on the death, alleging that Jaradat had “probably” died of cardiac arrest. However, Jaradat showed no sign of heart failure before the interrogation.

Jaradat’s death came one day after 94 Palestinians were injured after Israeli troops stormed demonstrations in the West Bank to demand the release of four hunger strikers on the verge of total organ failure or other major complications.

Jaradat’s body was transferred to the Palestinian Authority hours ago where hundreds of Palestinians gathered to great the ambulance at the Tarqumia Crossing, Haaretz reports. Jaradat’s body will be laid to rest in his village of Sair. This video shows his body after being transferred out of Israeli custody.

Dozens have already been injured during the Israeli military’s crackdown on West Bank protests. Two Palestinian protesters, including 14-year-old Mustafa Hilal, were shot by Israeli settlers near the village of Kusra. The son of a Palestinian head of security services was also wounded after being shot by an Israeli soldier near Betunia.

Additionally, some 4,000 Palestinians detained in Israeli prisons continued their hunger strike after returning their dinners for the second straight day. By the end of 2012, 4,500 Palestinians were being held in Israeli jails and detention centers, according to Israeli human rights group B’Tselem.