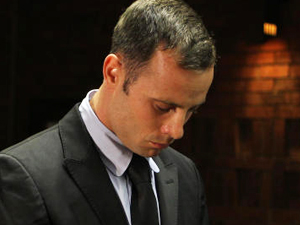 On February 14th, paralympian Oscar Pistorius, South Africa’s sprint runner and sports star, was charged with murdering his girlfriend Reeva Steenkamp. What makes this case especially intriguing is that Pistorius uses custom-made “running blades.” Born with fibular hemimelia (absence of fibula in both legs), Pistorius underwent an amputation at the age of 11, and has since used prosthetic legs to walk and run.

Prior to February 14th, Pistorius enjoyed celebrity status in his native country and abroad, inspiring millions with his incredible story of triumph despite a physical disability which might have devastated another. The South African government awarded him with special honors, as did an Italian town (his mother had Italian ancestry), TIME magazine, the BBC and a Scottish University. But even his celebrity and uplifting story of perseverance couldn’t help his reputation as he stood sobbing in court, charged with murder.

According to the defense, Pistorius, who lived with Steenkamp, heard a commotion and assumed there was an intruder in his bathroom. In self-defense, he shot through the closed bathroom door four times. According to the prosecution, Pistorius and Steenkamp had had an argument previously: Pistorius shot Steenkamp with the full intent of killing her, and full knowledge of her presence in the bathroom, as three bullets out of the four ended up hitting her. She died soon after, leaving behind a grieving family and a short modeling career. After a brief but widely publicized trial, Pistorius was granted bail (of about $113,000) on February 22nd, a little after a week of being charged. Still, courts and the general public agree that Pistorius murdered his girlfriend with intent and malice. Critics argue that Pistorius probably expected he would be granted bail no matter how hideous his crime, because his millionaire status and celebrity are his power. It is too early to know whether Pistorius will ever be able to resume his career (or what will become of his murder trial). But one thing is for sure: Steenkamp will never be able to resume hers. Her family will always be in a state of grief; one can only hope that they will find peace.

Pistorius’ case garnered worldwide attention because of his celebrity status and popularity. Stories like this are presented as individual and unique, rarely contextualized in a larger, global phenomenon of violence against women. There are hundreds of thousands of cases of domestic violence here in America which go unpublicized and unnoticed. According to a study, a woman is assaulted or beaten every nine seconds in America. One in five American women have been abused or experienced domestic violence and women are more likely to be murdered by their partners than are men. The phenomenon is becoming more and more common. Everyone probably knows at least one person who has been a victim of domestic violence.

The soft-spoken, kind lady who threads my eyebrows and works long hours on a minimum wage at this salon has a hand scarred by a third-degree burn. She had to stop working for a month because of the severity of her injury. When asked, she will insist that she spilled hot tea on it. But when her husband calls her during work, demanding to know just what she’s doing and where she is, I suspect she is lying. I saw her eye visibly healing from a bruise last time I saw her. I did not ask her what happened, out of respect, but also because I did not want to remind her of the abuse she escapes every day for some hours while she is at work.

One of my neighbors, who has since moved from the area, also suffered frequent beatings from her husband. She would talk of minor disagreements which would result in him raging at her and leaving her in terrible physical pain. She had three young daughters, all of whom I had babysat and came to love. But I could not stop feeling overwhelming helplessness. I could not stop the abuse because I was not her relative or friend, just a neighborhood teenager at the time. If I told someone, I feared the abuse would increase. Now, I regret my silence. I wish I had done something to help.

Why does domestic violence occur with such disturbing frequency in the US? What are the causes of this phenomenon and how can we solve this problem?

The US, for the most part, is a patriarchal society, one that especially favors men. Often, abusers are respected, educated, and prominent members of society. Authorities are expected to believe doctors, lawyers, policemen, and community leaders over their housewives. And the abusers are confident that they will get away with their crime, for the most part. Even if their spouse tells someone about the violence, it will not be easy to prove in court. Many domestic violence cases become he said-she said cases where, because the victim was unable to gather evidence or document the abuse, they are denied justice. To add insult to injury, many instances of physical or emotional abuse are not even reported because of family pressure or the abusers’ threats. If the couple has children, it makes it even more difficult for the victim to leave the abusive relationship. Stalking, threatening, and verbal abuse become a daily part of the victims’ lives. What can we, as a society, do to stop this cycle of abuse?

It is imperative that the complex issue of domestic violence is addressed on a national scale. Even as the Violence Against Women Act is renewed after much conjecture in Congress, and some domestic violence victims are given protection and access to justice, progressive steps still need to be taken in our society. Until and unless women are given the same respect and position in society as men, instances of domestic violence will only increase. The media must stop glorifying men mainly as heroes and deconstructing women mainly as objects. The government must ensure stricter punishments for those criminals who commit domestic abuse. And every individual member of society must stand up against domestic violence and misogyny. If not, then tomorrow we might hear of another young woman killed by someone she loved and trusted. Let us try not to let that happen.

Smarter Sentencing Act: Will it Decrease Racism in the War On Drugs?