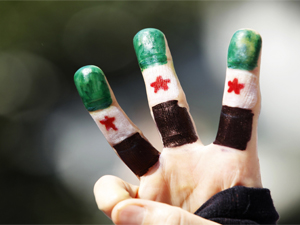 When I was eleven years old, my father said to me: “Don’t you ever say the word ‘regime’ and don’t mention Hafez Al Assad’s name at all.”

There was a saying among the public referring to the extent the intelligence forces were dominating Syrians’ daily lives: “Lower your voice, the walls have ears.” Every morning before classes started at school, we had to chant: “Our leader forever is Hafez Al Assad.” This was the way people were raised in Syria for the last 40 years.

In 1982, Hafez and Rifaat Al Assad (Bashar Al Assad’s father and uncle) carried out the massacre of Hama in order to quell the anti-government uprising of the Muslim Brotherhood; more than 30,000 people were killed and half of the city was destroyed. This represented a clear message to Syrians that the Al Assad family would maintain control of the country whether we wanted it or not.

When Bashar Al Assad came into power in 2000, we had hoped that he would advance Syria and diverge from his father’s patterns of abuse and oppression. We expected that his youth and education in the United Kingdom would enable him to be more connected to the needs of the Syrian people. But nothing changed after Bashar came to power; security forces maintained control and surveillance over every aspect of the daily life of Syrians. Day by day he proves to us that, sadly, our expectations were naïve.

Witnessing the revolutions erupt in Tunisia and Egypt inspired hope in our hearts; hope that things could and would change, but the memory of the Hama Massacre lingered, reminding us of the dangers of trying to topple the Al Assad regime.

Surprisingly, in March 2011 a group of school students in a southern city ‘Daraa’ wrote on the walls: “People want to topple the regime,” a saying they were hearing everyday on TV in other Arab countries where there were uprisings.

In response to their apparent crime, the security forces detained and savagely tortured them. News of the torture spread quickly; we all winced at hearing about how they had pulled out each of the student’s tiny nails just for what they wrote.

The students’ families protested to get their kids back. The chief of the political security branch, Atef Najib, Bashar Al Assad’s cousin, responded to the protests with insult, saying: “Forget about your sons and I will give you new ones. Just bring your wives to me first!”

At this point, Syrians united with the parents in disgust and decided we could not and would not accept humiliation and repression anymore. We began to protest.

As the oppression against the rightful demands of protestors increased, people started calling for toppling the regime and for the president to leave. I participated several times in both protests and funerals of martyrs in Damascus.

On the 18th of February, 2012 Assad forces shot on a peaceful protest in Mazzeh Street in the heart of Damascus after a funeral of three martyrs who were killed by the regime. Many people were injured and a man was killed. I was there.

I felt bullets over my head; their sound was so close that I felt I was going to be shot at any second. I managed to hide and avoid gunshots and returned home safely.

This was the situation in almost every protest in Syria; peaceful protesters must confront live bullets and barbaric oppression.

The revolution was completely peaceful in the first seven months, chanting and demonstrating were the only weapons of the Syrian people. As the Syrian regime’s violence and oppression escalated more, people were tortured, displaced and killed and many homes were destroyed in several cities in Syria. Accordingly, soldiers in the Syrian army defected, refusing to kill innocent unarmed protesters and were willing to protect them from the regime’s attacks.

The defected soldiers eventually formed the Free Syrian Army (FSA) with civilian volunteers who wanted to defend their families and homes from the cruelty of Assad regime.

From the very first days of the revolution the regime tried to represent it as a bunch of corrupted people and outlaws who wanted to segregate the country with their sectarian motives. They wanted to make people afraid of protesting- afraid even to just think of toppling the regime of the Assad family.

The regime planted car explosions among civilians and accused the opposition of planting them, hoping to instill in the people distrust and dislike for the revolution and the Free Syrian Army.

The regime was and is still trying to drag the Syrian people into a sectarian war to weaken people and control over the revolution. Recently, the Syrian Air force bombarded the University of Aleppo killing 87 people (most of them were students). The Syrian government’s TV channel hurried to the campus showing the destruction and bodies saying that a ‘terrorist explosion’ had targeted the architecture faculty at the university.

The regime is willing to destroy the whole country to convince its supporters and the whole world that “terrorists” are behind the destruction and killing in Syria.

What makes the situation more complex is that the US government has listed Jabhat Al-Nusra – an Islamic brigade within the Free Syrian Army- as a “terrorist group.” As a result, the international community became more hesitant in arming the FSA.

Now, the world is watching the Syrian people die every day, at the hands of the insane Assad regime. The regime continues to claim they are attacking terrorists, but thousands of children and women have been killed by Assad forces. The death toll in Syria is escalating every day, conservative estimates at about 70,000.

The powers in the West is concerned that arms may go into the “wrong hands” and extremists; they are not concerned that hundreds of innocent people are being killed and thousands of houses are continuously bombarded. This is inhumane, unethical and a mockery of Syrians’ precious souls.

Many of President Obama’s advisors, including Defense Secretary Leon Panetta, General Martin Dempsey and others, have tried to convince him to arm the Syrian opposition with lethal weapons. Unfortunately, President Obama rejected their claim for an ambiguous reason, which in my opinion is related to protecting the security of Israel.

Every single Syrian kid has the right to be protected from Assad’s thugs shelling and murders. They have the right to live a peaceful happy childhood like children here in U.S. and many other place around the world. We can help those children and their moms who have no food or shelter and are in a desperate need for every cent. A blanket can reduce their suffering and protect kid’s tin bodies from cold.

I met an American professor who taught at Baghdad University in the 1980s and visited Aleppo twice. She said to me with tears in her eyes: “Thank you Syrians for making history.”

It is an honor for me to be Syrian, to have only a tiny role in this revolution makes me grateful and fills my heart with glory. History will remember who stood with this orphan revolution and will pair their names with dignity and honor, and will not forget those who watched Syrians silently dying without doing anything.

Syrians believe that the world doesn’t care about them or their destiny and they are not waiting for anyone’s help anymore. They will persist in trying to topple the regime and build a new democratic Syria–a Syria where all religions and sects coexist as they had for thousands of years in the past.