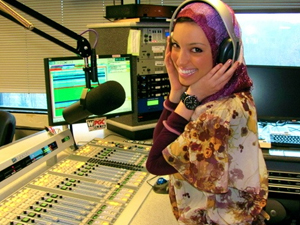 In December of 2012, 19-year-old Noor Tagouri became a bona fide internet celebrity. This happened when she posted a picture of herself sitting at an ABC News anchor’s desk, proudly wearing a hijab and a bright smile. The photo then spread across social media and gave Tagouri the attention she wanted. But unlike other internet celebrities, Tagouri focuses her energy on encouraging others to fearlessly live their dreams, breaking stereotypes and detailing her journey to becoming the first Muslim hijabi news anchor and talk show host on American television.

The famous picture was taken in October of 2012 during Tagouri’s fall semester at the University of Maryland when she began shadowing “as many journalists as possible.” While shadowing an ABC news anchor in D.C, the anchor then snapped a picture of her at the desk and then Noor simply posted the picture to her Facebook page. She had no idea what would follow. “That night I posted it as my profile picture, with a caption stating my dream and how I wanted my future to look like this. I’m a big believer in the power of visualization. In the beginning of December, one night, the picture started going viral,” stated Tagouri via email. “If you ask “how,” the only answer I can give you is Allah (SWT).”

Promoting the hashtag “#LetNoorShine,” across YouTube, Facebook and Twitter, Tagouri took the internet by storm. The hashtag is not just about Tagouri herself, but to teach and inspire others (Muslims and non-Muslims alike) to find their passion to fuel their dreams.

Doors then immediately burst open for Tagouri after that now iconic photo spread rapidly across social media and sparked many conversations. Currently, the picture has over 25,000 ‘likes’ and has been shared 1,619 times on her Facebook page alone. However, her journey did not end on social media. Tagouri was able to meet several of her idols, such as: Christiane Amanpour, Lisa Ling, Soledad O’Brian, Ted Kopple, Wolf Blitzer and Anderson Cooper to name a few. Then, she was actually given the opportunity to shadow some of them. “I was given the chance to shadow and meet with Soledad O’Brien and Christiane Amanpour, two of my biggest inspirations, said Tagouri.  “I have been blessed with a great support base of thousands, alhamdulilah.”

Discussing her thoughts about what happened after the picture spread across social media, Tagouri stated: “I just feel blessed and I feel like this is a responsibility I have to carry out. I was surprised by how global this has gone and how my universal message has inspired people from countless backgrounds.” She currently has more than nine-and-a-half thousand ‘likes’ on her Facebook fan page.

Tagouri has undoubtedly become an inspiration for many. But when asked what inspires her, she stated: “Many of the journalists I have met are my biggest inspirations. Anderson Cooper, Christiane Amanpour, Soledad O’ Brien, Ted Koppel, Lisa Ling, etc. However, I would have to say that my mother and father truly inspire me the most. My parents are the most loving and hard working people I know, mashAllah. They define persistence; trust in God, and hard work. They always give the best advice and have supported me since day one.”

Tagouri always wanted to be a journalist after watching people like Oprah and Diane Sawyer, but also because she had a niche and love for asking questions and telling stories. “I always felt like that was my “talent” growing up and my elders and teachers always told me I asked good questions,” said Tagouri.

Since she has developed a voice and following on social media as a budding journalist, she has not lost sight her drive to tackle big social issues. “I’m passionate about human rights, and specific aspects of it (sex slavery, trafficking, domestic violence.) I want to be the voice of the voiceless and lessen ignorance through the stories and my delivery.”

Tagouri, now a junior in college, is doing well to package herself as a future powerhouse journalist. Aside from interning with local newspapers and radio stations, she does a lot of training and mentoring.  Currently, she works for CBS Radio and has big plans in the works. “I’m 19 and still a junior in college, so I haven’t done anything too big yet, but definitely soon iA,” stated Tagouri.

For now, she is continuing her work in radio, being trained and mentored by an executive producer, speaking at universities “to inspire and be inspired,” and studying broadcast journalism. “I look forward to continuing in all of these things and growing along the way, inshallah!,” stated Tagouri.

Tagouri continues to receive an outpouring of support. With over 4,000 Twitter followers, an ever-growing Facebook and YouTube fanbase, she is no longer a typical internet “celebrity” but a motivational figure for thousands. “I’m just really humbled. I know all of this success has not come from me at all. It is ALL the blessings of Allah (SWT.),” said Tagouri. “I know he has put me on a mission that I need to carry out, I am so grateful for everyone who supports me and who has been inspired enough to be vocal about their dream too!”

All in all, it’s clear that the name “Noor Tagouri” will not fade into obscurity. The passion that has fueled her dreams is tangible to any and all who meet her or hear her speak. Not only does she continue to inspire others by pursuing her dreams on an individual level, but she also embodies a great deal of hope and change for the Muslim community in this country. She will effectually help to dismantle many harmful stereotypes of Muslims in America and Muslim women more generally.

“I want to continue to inspire others to go after their dreams and hearing people tell me I have inspired them inspires me to continue on my path,” said Tagouri.

There is definitely more to come from this young woman. Stay tuned.

A centuries-old Jihad: Women of the Abrahamic faith traditions strive for justice and fight sexism in religion