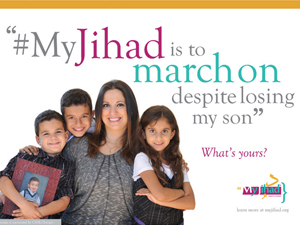 Last week, Amitai Etzioni published an article in the Huffington Post critiquing the #MyJihad ad campaign, a series of ads that aim to reclaim the Arabic word jihad and have been posted on buses and in metro stations across Washington DC, Chicago and San Francisco.

Etzioni made some critical points in his article by demonstrating that Islam is no more violent than any other major religion. By highlighting the comparable violence embedded in the religious texts of other major religions like Christianity and Judaism, he helps readers understand that Islam has been unfairly framed as a particularly violent religion as opposed to a religion that, like most others, condones physical fighting under certain circumstances.

Etzioni goes on to claim that the two ‘interpretations’ of jihad are ‘holy war’ and ‘spiritual struggle.’ In fact, jihad is an Arabic word that literally means ‘struggle;’ it is never mentioned in the Qur’an to reference a ‘holy war.’ The concept of holy war is not even historically a Muslim one; jihad’s association with the term ‘holy war’ is entirely contemporary. Like the word struggle in English, jihad does not have any necessarily physical connotation, though like the word struggle, it can be used to denote a physical struggle.

Etzioni asks the creators of the campaign to recognize that jihad “is open to both kinds of interpretations- both those that legitimize violence and those that abhor it.” According to the website, the #MyJihad campaign does not deny that the term can be interpreted as a physical, militarized struggle: “While the struggle for justice may be physical (as a last resort, and even then it ought to be a just struggle that goes above and beyond observing the universal code of conduct and rules of engagement), the greatest Jihad is that of the self, a fact often ignored by, or unknown to, many.” As clearly stated, the campaign aims to highlight that the greater jihad is not, in fact, a physical struggle and that the bulk of Muslims engage in nonviolent jihads on a daily basis. The campaign seeks to demonstrate to misinformed Americans that an important aspect of Islam as practiced by most Muslims is not violent.

Next, he inaccurately associates the spiritual aspect of this struggle exclusively to the mystical orders of Islam, better known as Sufis. While Sufis undoubtedly believe in the importance of jihad as a spiritual struggle, the hadith that he mentions is not only attributed to the Prophet by Sufis; it is widely recognized by masses of mainstream Muslims to be a saying of the Prophet. And more technically, the hadith wasn’t authenticated by Sufis, as Etzioni claims, but, like all sayings of the Prophet, has gone through a thorough process of authentication by Sufi Muslims and non-Sufi Muslims alike. By consistently referencing Sufis as the source of this ‘peaceful jihad,’ Etzioni essentially implies that the campaign has appropriated the Sufi interpretation of the term when, in factuality, it is actually a very mainstream concept in Islam.

Growing up in a suburb of Milwaukee, WI at a mosque where self-identified Sufis were not well-represented at all, I heard this hadith often. In my case, the hadith was presented to me as encouragement to continue struggling to confront the bigotry of my middle school teachers and classmates. The point of the #MyJihad campaign is to demonstrate to the largely misinformed American masses that most Muslims, like myself, understand the term jihad as an internal struggle- a struggle to educate, a struggle to withstand ridicule, and ultimately, a struggle to remain patient and compassionate.

Besides Etzioni’s odd factual distortion, I understand the perspective that Etzioni represents. It would indeed be ideal if depictions of Islam and Muslims could be more nuanced in mainstream American culture. But Etzioni unfairly directs this request for nuance towards the #MyJihad campaign, instead of the producers of mainstream American culture who consistently simplify and Orientalize depictions of Islam and Muslims. Etzioni utterly fails to recognize that the campaign exists in a context of widespread Islamophobia and bigotry. Representations of other religions and their adherents are not nearly as one-sided as those of Islam and Muslims in contemporary America; and ultimately, these vast misrepresentations have created an atmosphere so rife with anti-Muslim hatred that Muslims, or those thought to be Muslims, continue to be the victims of hate crimes across America.

Etzioni’s article, while not entirely flawed, missed the mark. He seems not only to have failed to have done his research on the #MyJihad campaign and the Prophet’s hadith, but he also, more broadly, completely failed to analyze, or even recognize, the context out of which the campaign sprouted.

Unmasking the Wonderful World of Disney