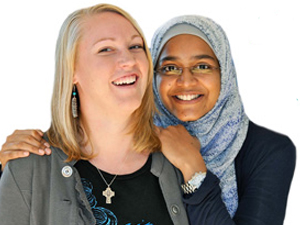 Weeks before Easter Sunday of 2013, Cardinal Jorge Mario Bergoglio of Buenos Aires, Argentina was elected to be the 266th Pontiff of the Roman Catholic Church. Bergoglio, now Pope Francis, is the first non-European man to lead the Catholic Church- the world’s largest Christian denomination amounting to over 1.1 billion people and constituting about a sixth of the global population. Among the church’s faithful, there are over hundreds of thousands nuns and women laity throughout the world.

On one hand, the Catholic Church’s move to become more diverse and inclusive is clearly reflected in the papal decision. However, not a single woman is allowed in the consecrated life, let alone in the papal election process. This reality sheds light on how women’s roles are perceived by the followers of the Abrahamic faith traditions over the course of centuries.

From antiquity to the contemporary era, women in Judaism, Christianity and Islam have always been active in striving for healthy relationships, building communal social justice, exemplifying unmatched leadership abilities, and developing strong voices- all while being on top of what is their most expected role as women—a homemaker, wife, mother and/or caretaker. To be precise, today’s women are present and highly competitive in every field they choose to serve: sciences, medicine, law, arts, writing, media, sports, entertainment, humanities, government, military–any occupation one may name, women have flourished in it.

Witnessing the historic milestone of this new pope’s selection leads me to consider the impact of women of faith. The event occurred in Women’s Heritage Month, and yet there is much concern regarding women’s rights around the world. I strongly believe that celebrating and fully recognizing the full capacity of womanhood should not be restricted to a specific month, week, or day. Rather, it must be acknowledged and respected continuously; especially for women in faith-based communities, we must consistently recognize the ways women shatter stereotypes at all levels of society and throughout all of human history.

Despite the image reflected by contemporary depictions of religious women, women have played integral roles in religiously-based struggles for social justice, morality and human dignity. The strength and courage of women of faith is a legacy that dates back to the eras of revelation in the Abrahamic faiths.

From Judaism’s history there is Esther, heroine of the Book of Esther; identified in Rabbinic literature as a Jewish prophet and queen of the Persian Empire in the Hebrew Bible, Esther risked her life by standing up to a those who threatened the livelihoods of Jews in Persia. Esther chose to not remain silent and stand up for what was right – that was her Jihad.

Then from the Christian tradition shines Mary Magdalene, a controversial figure who spread the word of Jesus even in the face of antagonism. Her Jihad for dignity, rights and freedom continues to live in the lives of the women till date.

Finally, in the Islamic tradition, despite what some may have you believe, there are numerous examples of powerful women of faith who lived in the time of revelation. One such examples is the Prophet Muhammad’s (Peace Be Upon Him) wife A’ishah, who is named as a role model for both women and men in Islam. She was a scholar, a poet, a jurist, a politician and a military commander who led armies. Her scholarly work is among the most respected and authenticated in the Islamic tradition.

The legacy of women like Esther, Mary Magdelene and A’ishah is not merely a phenomenon from the past; rather, women of faith continue to forge pathways towards social justice and advocacy even in contemporary times.

During my visit to Jerusalem this January as a part of an interfaith scholarship I was awarded, I had the honor to meet with and hear in person the life stories of many admirable women. One woman in particular proved truly inspiring; full of laughter and wise teachings, Anat Hoffman serves as the chairwoman of Women of the Wall. Hoffman has been persistent in fighting the battle that was started more than twenty four years ago to achieve women’s social and legal right to wear prayer shawls, pray and read aloud from the Torah collectively at the Western Wall. The present rabbi of the Western Wall recently accused the Women of the Wall group of provoking war among Jews in Jerusalem in their proposition for equality at what is considered the Jewish community’s holiest site. Yet, the Jihad for justice still continues, and progress is being made.

Here in the United States, Simone Campbell, Executive Director of NETWORK, a Roman Catholic social justice lobby in Washington, D.C., forges another path for women of faith. When the Vatican called out NETWORK for promoting certain radical feminist themes, Sister Campbell channeled media attention to raise awareness about poverty in America, and launched a campaign called Nuns on the Bus. The campaign formed in opposition to Representative Paul Ryan’s budget proposal to raise taxes on low-income families while cutting taxes for millionaires and corporations. Sister Campbell’s Jihad is to fight inequality and alleviate poverty in the face of public condemnation.

Finally, from the Muslim community, where women are too often perceived to be leading their lives at the mercy of their men, one woman is working hard to educate and empower a generation of young girls in Syria. Houda al-Habash, the founder of the Al-Zahra Qur’an School for girls in Damascus, Syria, embodies the kind of strength and independence encouraged by Islamic doctrine and tradition. Her thirty year old school aims to empower girls with serious study sessions on Islam conducted in the mosque premises. The award winning film makers Julia Meltzer and Laura Nix are the producers of the documentary, The Light in Her Eyes, which reports the life of Houda al- Habash and her vision for expanding women’s opportunities through Islamic education.

In light of all the critical work that women like Hoffman, Campbell and al-Habash are doing now and have been doing for years, I urge us all to diligently recognize the struggles, honor the work and celebrate the achievements of the countless women and men who work to help make the world a better place for all, irrespective of their religious or cultural background and irrespective of their gender.

At the same time, while we must continue to heed the work that’s being done to achieve progress for women in faith-based communities, we must not fall into the trap of downplaying the unique forms of sexism that exist in and plague our faith communities. Instead, I propose that we refocus on the foundational teachings of our faiths and use this knowledge to facilitate women’s entry into leadership roles more broadly.