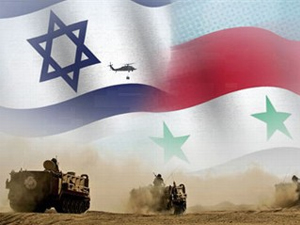 On Sunday May 5th, Israel carried out an airstrike against targets in the suburbs of Damascus, including the Scientific Studies and Research Centre, which is responsible for Syria’s biological, chemical weapons. Other targets included bases for Syria’s elite Republican Guard and storehouses of long-range missiles.

Israel justified its breach of Syria’s sovereignty by claiming that the attacks were meant to prevent advanced weaponry, including chemical weapons, from getting into the hands of Hezbollah. Israel has attacked targets in Syria three times this year.

One such attack was to prevent the transfer of “game-changing” surface-to-surface missiles, which were bound for Hezbollah. “The Israelis have long said they would strike at any targets in order to prevent the transfer of any kinds of weapons to Hezbollah or other terrorist groups, as well as any action that could threaten Israel.” The Israelis are concerned about the Assad regime deploying chemical weapons against it or transferring advanced weapons to terrorist groups it deems hostile to it.  President Obama responded to news of the most recent raid by defending Israel’s justified right to “guard against the transfer of advanced weaponry to terrorist organizations like Hezbollah”.

Syria has stated that Israel’s aggression is an act of war, which opens “the door to all possibilities.” Faisal Mekdad, the Syrian deputy foreign minister declared that Syria would respond “immediately and harshly” to attacks from Israel. However, after three attacks, it is clear that Israel is able to act against Syria with impunity. If Assad tries to attack Israel directly or through terrorist proxies, namely Hezbollah, he will risk forfeiting his regime. Israel has hinted at additional military strikes and crippling retaliation were Assad to respond to the air strikes. He will not only be fighting against the advancing rebel forces, but would spread his resources thin against the far superior and American backed Israeli military. On the other hand, failing to respond grants Israel license to continue its aggression.

Syria’s inability to respond showcases its weakness and serves as a green light for Israel to continue to defy international law with its military aggression. Mouin Rabbani, coeditor of the Arab Studies Journal Jadaliyya, predicts that Israel will “retain the freedom to act…systematically to degrade Syria’s military capabilities, its support of groups beyond its borders” as well as regimes and organizations it finds harmful to its interests. Such unchecked power destabilizes the region and further exacerbates tensions with Iran, which is a regional power and Syrian ally.

Syrian retaliation, however, would drag Israel and other regional stakeholders into the conflict, which would inevitably cripple the regime and could potentially benefit the rebels. Iran would back Syria in the case of confrontation with Israel. Meanwhile, the House Foreign Affairs Committee recently reaffirmed its support for Israel in the case of an Iranian nuclear attack.  Furthermore, America’s strong alliance with Israel might ensnare America further in the Syrian conflict, whether directly or indirectly. In either case, America’s role would undoubtedly fuel anti-American sentiment in the region.

Most countries in the region as well as the West have denounced the regime and called for Assad to step down. The international response has been largely unsympathetic, which is indicative of the Assad regime’s status as an international pariah. Reports of massacres and atrocities committed by the besieged Assad regime against its citizens saturate the news worldwide. The UN warns of mounting reports of the use of chemical weapons by the Assad regime. Such acts have been identified by the US and Israel as a “red line” that would change the calculus of the international, and particularly the American, response.

However, Turkish Prime Minister Tayyip Erdogan condemned Israel’s air raids, stating that Israel’s actions are “completely unacceptable; there is no rationale, no pretext that can excuse this operation.” His condemnation was not aimed at endorsing the Assad regime. Rather, he argues that such aggressions cast the illegitimate regime as a victim of Western backed breach of sovereignty. It is essential to those opposed to the besieged regime that Assad is characterized as the despot and “butcher” he is.

The Assad regime’s diminished legitimacy, as well as Israel’s military supremacy and Western backing has enabled Israel to continue to disregard sovereignty with impunity. By antagonizing the Syrian regime and indirectly allying Hezbollah and Iran, Israel may broaden the Syrian conflict into one of regional scope and international implications. Iran’s UN Ambassador Mohammad Khazaee argued that “nothing can justify the use of force and act of aggression against a sovereign state and the aggressor must be held accountable for any consequences stemming from this condemnable and illegitimate act which endangers regional and international peace and security.” By consistently and flagrantly disregarding international law, Israel’s actions undermine regional stability while bolstering Russia and China’s reservations about preserving sovereignty and border integrity. The UN has failed to condemn the air strikes, which is symptomatic of the problematic power dynamics at play in the Security Council.

The attacks crystalized the widespread implications of the Syrian civil war. The region and the world at large wait with baited breath to see which regime will emerge victorious. The weakened and beleaguered Assad regime uses indiscriminate violence against its people to maintain its grasp on power. Sectarian violence in the country as well as a disjointed opposition has contributed to the international community’s hesitation to intervene in the conflict. However, Israel is stoking the flames of a broader conflict.

Standing up for justice: an activist’s guide on Palestine