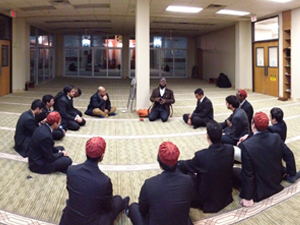 You don’t have to go far to find harmful stereotypes of Muslims and Arabs in the mainstream media. In fact, there is a name for those stereotypes—billionaires, bombers, and belly dancers—known as the “three B syndrome,” coined by Mazin B. Qumsiyeh, author of 100 Years of Anti-Arab and Anti-Muslim Stereotyping. In addition, these images have been excessively saturated over the years in American culture and media, especially in post-9/11 America. As Qumsiyeh explains, the U.S. needs a “demonstrable enemy who will not go away,” and Muslims and Arabs have consistently been that enemy.

In recent times, particularly with the Boston bombing incident, Muslims, and those who “look Muslim,” were immediately profiled as the culprits even before the suspects were identified. After the identities of the bombers were announced, hate-fueling machines that had already warmed-up really revved up their engines. Attacks, before and after the bombing, against Muslims and those who “looked Muslim” occurred in many parts of the country.

In America, any major acts of terror are constantly being tied to Muslims and Islam is framed as the sole incubator of this type of violence. Furthermore, Islam is and has been constantly regarded in mainstream society as an “ideology” that is archaic and barbaric, which allows people to think that it gives way to ultraconservative and backwards thinking of those who practice it. This idea has proliferated in American culture and many people hold these views, and more dishearteningly, many of the people who hold these views are in positions of power. Therefore Muslims are attached to all of these stereotypes.

Besides being told Muslims are terrorists, another major stereotype is the subjugation of women in Islam. Former First Lady Laura Bush previously explained that U.S. needs “to kick off a world-wide effort to focus on the brutality against women and children by the al-Qaeda terrorist network,” which was also something used as justification for the war in Afghanistan. Former President Bush often referred to the misogyny of women in Islam throughout his term in office. President Obama called for Muslim-majority countries to continue to bridge the gap between women and men in their culture in his 2009 Cairo speech.

Although, there are cases of disparity among women in Muslim-majority countries, on the whole, there is no huge difference between the West and the East. (There must be a distinction, however, between culture and religion, too. Cultural norms may be different, but Islam itself does not command the oppression of women.) In fact, a 2005 Gallup Poll World Poll revealed that majority of Muslims, including some in the more conservative Muslim countries, supported women’s rights. However, that fact doesn’t stop these ideas about widespread oppression against women in Islam from becoming standard.

Yet, rather than throwing around hard facts, the best way to counter standard ideas is to show people. This is exactly what one fraternity did at the University of Texas at Dallas. The fraternity, Alif Laam Meem, a founding chapter of the new Alpha Lambda Mu Fraternity, is a Muslim fraternity. With the work they do, and have done, they challenge these types of stereotypes of Muslims and said their mission is to uphold Islam’s true core values.

Although forming a Muslim fraternity initially started off as a joke, Alif Laam Meem president and founder Ali Mahmoud said via email, once it officially organized they realized the good they could do.

“The idea coming up with the idea of a Muslim fraternity seemed heretical,” said Mahmoud. “But as a few friends and I slowly developed the idea, we began to realize that we were institutionalizing a solution to a problem in the Muslim male college life. We were filling a void.”

Once the fraternity was organized as something “more serious” with a mission to “have a strong group of young gentlemen who will stand up for social justice and service just as the religion calls them to do,” the fraternity found a way to tackle more pressing social issues. One major example was at a rally was held in Dallas by the Mayor in March. The rally was a men’s rally against domestic violence.

However, for the men of Alif Laam Meem it was basic instinct to be in support of women’s rights and stand up against violence against women.

“Plainly and simply, we’ve been inspired by our religion to unite and bring as much good to our society as possible,” said Mahmoud. He said that he understood that the Dallas community was not immune to domestic violence and those destructive practices are completely contradictory to the teachings of Islam, which gave more reason for his fraternity’s attendance.

Although the fraternity’s presence at the rally did not pick up the attention from local media in Dallas, “social media revealed its power,” said Mahmoud. In particular, it was through progressive viral content aggregator UpWorthy that I learned about this story. The picture of the fraternity at the rally, holding signs, quickly spread across social media and then was picked up by some mainstream news outlets, such as ABC News, applauding them for their efforts.

In light of the overwhelming support of their efforts, Mahmoud said: “In days where Islam is continuously victimized, it gives us hope to see that the light just may be able to outshine the darkness.” Mahmoud stated that the fraternity has received responses from other colleges and universities from Muslims to open chapters. Additionally, he says that the work that his fraternity does is not over. They will continue to serve and continue to do good for the community. “We’re just getting started,” he said.

After the tragedy of the Boston bombing, Alif Laam Meem started a fundraiser for the victims to help pay for medical costs, despite the overwhelming stereotyping and profiling and criticisms of Muslims before and after the incident.

“While it is important that Muslims do voice themselves, the loudest voice we can possibly have is our actions. If we are caring, helpful, and essential components of our community, our community will side with us no matter what the TV says,” said Mahmoud.

And at the core, there is also recognition in the fact that stereotypes are pernicious. They not only insult respective cultures and the values they uphold, but it dehumanizes an entire group. As long as these stereotypes are potent and present in mainstream media, especially news media, they will continue to find cozy places to reside in, which will most likely be in the subconscious mind of media consumers.

Regardless of the fact that Muslims and Arabs alike, because of an ignorance of Islam, are repeatedly perceived in a one dimensional view, raising the consciousness of our society about different cultures and religions now becomes a critical issue.

Alif Laam Meem’s work is evidence that not all Muslims are the Muslims the mainstream media like to talk about and demonize. Islam is not a sly and mischievous ideology masked as a religion, it is a religion. And the stereotypes associated with it should not be disrespectfully preserved because of the minimalistic views from some of Islam’s loudest and most egregious opponents. There should be an effort to eradicate these images, but until then acts of tolerance like the ones from Alif Laam Meem and many others will continue to be important in the moral quagmire that is profiling and stereotyping in American culture.