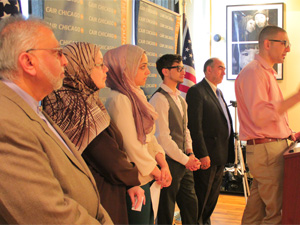 On Thursday May 30th, the Chicago chapter of the Council on American-Islamic Relations hosted a press conference in their office on State Street, with leaders of Muslim communities in the Chicago metropolitan area, in an attempt to garner support for immigration reform.

After revising a security fault in the Border Security, Economic Opportunity and Immigration Modernization Act of 2013, found after the Boston Marathon bombing, the Senate Judiciary Committee voted on May 9th with a bipartisan majority of 13 to 5 to move the bill to the senate floor. The bill – should it be passed into law – would provide a pathway to citizenship for 11 million undocumented immigrants. The senate vote is scheduled for June.

Senator Harry Reid has expressed hopes that the bill will pass the senate with not only a 60 vote super majority to combat a filibuster, but with 70 votes to put further pressure on the Republican majority House. Illinois Democratic senator Dick Durbin has already come out in favor of the bill; however, Republican senator Mark Kirk remains silent. 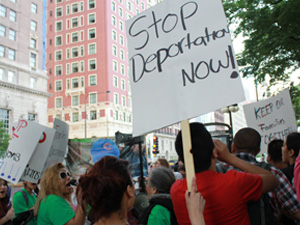 On Wednesday May 29th, the day prior to the CAIR Chicago press conference, President Barack Obama spoke at a fundraiser in Chicago on behalf of the Democratic Congressional Campaign Committee. This event was met with a slew of protests outside the Chicago Hilton against the 1.6 million deportations that took place during President Obama’s administration. In the morning, immigration activists from the organization #NOT1MORE laid down on Michigan Avenue, in front of the Hilton, atop a banner reading “400,000 not one more deportation.” They also linked arms through PVC piping to obstruct traffic and prolong their resulting arrests. 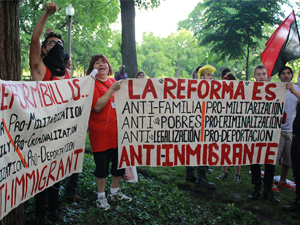 The immigration reform bill requires payment of fees as a step towards citizenship; given that 65% of undocumented youth come from households that earn 200% below the poverty line, these fees would inevitably add financial burden to already-impoverished families. Reema Ahmad, of Asian Americans Advancing Justice, recognizes the potential shortcomings of the bill, but ultimately supports it. “I’m sure [the costs associated with obtaining citizenship] are going to be coming from the pockets of these individuals [undocumented immigrants,]” she said. She went on to say that despite this, major reform is still vital. Some opponents of the bill fear that the anticipated costs, those mentioned by Ahmad, could inhibit people from pursuing the path to citizenship offered in the immigration reform bill as it stands.

The significance of immigration reform has been mounting as Democrats try to regain the house in the 2014 interim elections, and as the GOP strives to renovate their campaigning tactics to target minorities. At the rally, Alaa Mukahhal, the National Partnership for New Americans Coordinator of the Illinois Coalition for Immigrant and Refugee Rights, called specifically on Senator Mark Kirk to come out in favor of the bill. “It’s important, it’s good for the economy, and it’s the humane thing to do. We need to push for Mark Kirk to become a champion of reform,” she said.

Immigration reform is especially salient in Illinois, where 1.74 million documented immigrants contribute to 13.5% of the state’s population. In 2011, the Chicago Sun-Times estimated that there were an additional 525,000 illegal immigrants residing in Illinois, accounting for 4.1% of the population. During the press conference, Executive Director of CAIR-Chicago Ahmed Rehab framed Kirk’s silence in terms of its potential political ramifications: “Should he [Senator Kirk] fail to help take leadership [on this issue,] there will be consequences,” which would presumably transpire during the 2016 election cycle.

In recent years, Illinois has set a progressive precedent on immigration reform. On August 1st, 2011 Governor Pat Quinn signed HB60 into law as the Illinois Dream Act, which made in-state tuition available for undocumented youth at public colleges and universities in Illinois; the Act also established the Dream Fund Commission to administer and raise the funds to sponsor this.

The CAIR-Chicago press conference highlighted the overwhelming support from the Muslim American community for immigration reform. “Our faith tells us that we should want for others what we would want for ourselves” urged Karen Danielson from the Mosque Foundation and Mas Pace, who attended with her colleague Oussama Jammal. Syed Shahnawaz Khan of the Downtown Islamic Center and CIOGC emphasized that immigrants in this country are “makers not takers,” which was recently illustrated by the $115 billion surplus paid to Medicare and Medicaid by immigrants, and the report that immigrants are more likely than non-immigrants to build businesses.

When asked about the United States’ logistical capacity to offer a pathway to citizenship for 11 million immigrants Ahmed Rehab, Executive Director of CAIR Chicago, answered that “The question of logistical capacity didn’t come up when the PATRIOT Act passed… We [must] look at where there is a bureaucracy stumbling on itself and move forward as the kind of nation we claim to be.”