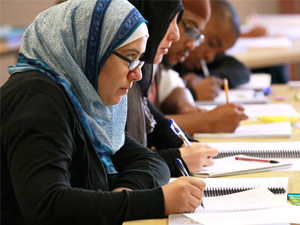 Every semester, students are asked to fill out course evaluations in which they give their professors feedback on their teaching and the course in general. This last semester, I took a class on the Christian Tradition, and on the very first day of class, my professor told us something that I later heard students say over and over again. He said that the number one comment that he gets on his course evaluations is that, as necessary as it is to learn about Christianity, students desire to learn about other religions. The Christian Tradition is a mandatory class in my academic program, and while all of my classmates, the majority of whom are Christians, were complaining about the class, I was jealous that they got to learn about their own tradition, while I was struggling to restructure my cognitive framework to allow a different and distinct tradition into my mind. Why? Because I have no access to a class about Islam at my university.

As the only Muslim in the class, I was somewhat envious of my classmates, because they got to take an in-depth course on their religion, and they did not even appreciate it. There they were, sitting in a classroom, getting the opportunity to learn about their faith from a Biblical scholar, while I did not even have the opportunity to take a class that focused on Islam the way this class focused on Christianity.

Despite the difficulty that accompanied learning about another way of life, I was glad I had the opportunity to learn about Christianity. I live in a country that is predominantly Christian; I study at a Lutheran University; a large number of my friends are Christian. These facets of my life have given me a profound appreciation for the Christian Tradition, and I think it is imperative that I learn about a religion that I have so much contact with. That is why I think it is so important for Islam to be taught in universities: so others can attain that same kind of appreciation for the beautiful religion that is Islam, and understand its connection to our society.

Last year, I was helping tutor a middle school student with her social studies homework. She was taking a World History class, which is required for most students at some point in their middle or high school careers, and when she began studying Islam, I realized that there was a momentous problem with the way her textbook approached Islam. The first part on Islam was about the five pillars and jihad, which paints a very one-dimensional picture of Islam; the next part was about Islam in the modern world, referring to controversies surrounding the hijab and talking about political situations in Iran, Turkey, Saudi Arabia, etc., which really only serves to confuse the young generation of students who are studying Islam in these schools and receiving insubstantial knowledge about the second most populous religion in the world, with 1.6 billion followers, as this study reports.

That said, most students going into their undergraduate careers have no real or accurate information about Islam. They believe Islam began with Prophet Muhammad, peace be upon him, and completely disregard all the history that came before. Considering the reaction to the Boston bombings, I believe there needs to be a stronger case made for furthering the study of Islam, nationwide. Ignorance spreads quickly, and ignorance is the greatest ally of racism, especially when the only tools for knowledge, ignorance’s strongest enemy, explains Islam as a religion with the sixth pillar of war. Few universities in the United States have an actual Islamic Studies program, and the list mostly consists of larger, well-known universities.

Last semester, a friend on campus told me that she asked one of her professors why the university did not have any substantial classes on Islam. Her professor responded by saying that the university wanted an Islamic program, but that the institution did not want to create a program without real academics and professionals in the field. While I can certainly appreciate that the university does not want to have an Islamic Studies program that is not strong and accurate, there is one question that this encounter brought to the forefront of my mind: Why is it so hard to find Islamic Studies teachers? I do not know if it is because all the professors are going to already existing programs at major universities, or because there just are not enough teachers, but without professional academics well-versed in Islam, there will not be a strong Islamic presence in the majority of the United States’ universities.

Americans will not have a solid appreciation for Islam until they are given the chance to understand, and there will be no understanding until universities have solid Islamic programs, thus helping spread awareness about Islam to those being trained to benefit our society in the future and dispel the ignorance surrounding the Islamic Tradition.