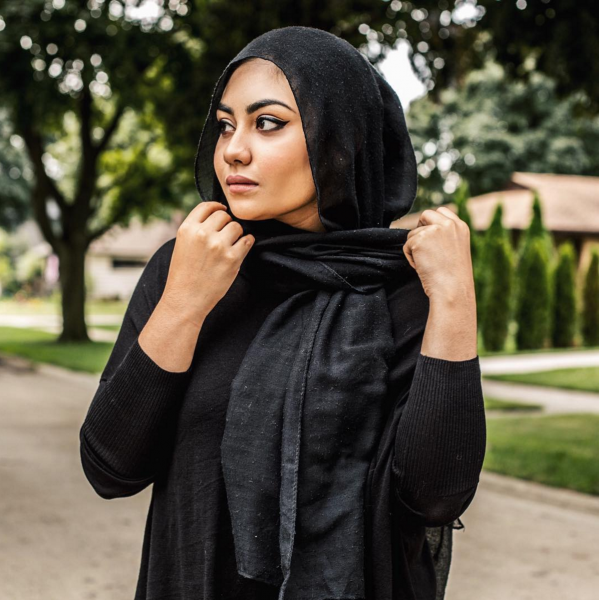 Ainee Fatima, a 22-year-old Muslim poet and rising senior studying Islamic World Studies and International Relations at DePaul University, became the first hijabi featured in Seventeen magazine when the May issue hit the stands in the past month.

This event was not only a milestone in Fatima’s line of achievements (she was a 2009 Louder Than A Bomb finalist and winner for her poem, Ramadan Reflections, as well as a 2010 Duo Slam champion, and was recognized by Hilary Clinton in 2011 at a State Department dinner), but it also marked a historic moment for other young Muslim women and girls in America.

“My parents don’t understand it,” Fatima said. “They just think I’m in this magazine where Justin Bieber is. But to be in a fashion magazine where they don’t feature girls who look like me was a huge deal.”

Three months ago, Fatima was in the middle of a stressful winter quarter.

“I was going through a really bad time in my life,” Fatima said. “I kind of just gave up on everything. With finals going on at school…I was kind of like losing hope because I hadn’t been writing in a long time.”

One day, Fatima came home, logged on to her email and was surprised to see a mysterious email from Seventeen waiting for her in her inbox.

Seventeen wanted to fly her out to New York for a photo shoot for Gucci’s Chime for Change, a global campaign with Beyoncé, Salma Hayek and other celebrities coming together to empower girls and young women. In addition to the photo shoot, Fatima was to be featured as a partner for the campaign, along with Talia Leman, founder of RandomKid and Morgan Fisher, founder of Bands that JAM for Africa.

Cautious thoughts immediately flooded her mind. This is a joke. This is not real. Why would they be emailing me of all people?

She began to do her research on the contact and realized the email she had received was the real deal.

“They said they wanted me to come out in the next three days,” Fatima recalled. “I had three days to decide if I could go or not, and it was the day before finals started. I thought, ‘Oh my God, I have to decide. This is a once in a lifetime thing. Either I go or I don’t.’”

After getting leave from DePaul and permission from her parents, Fatima and her younger brother flew to New York, where they met the other girls and the Seventeen staff.

“They were just telling us about how they found out about us, and I thought maybe they know me from Tumblr because that’s where a lot of people refer to me from,” Fatima said. “But they didn’t know about my Tumblr, they didn’t know about my blog, they didn’t know anything about it. It was weird. Even if you search Muslim poet, you’ll get Boona Mohammad and all these other people, and it’s just like I don’t know where they chose me. I really don’t know. I wish I knew. People were like, ‘Did you submit something? Did you do something for them?’ And I was like, ‘I haven’t read Seventeen in like six years. I haven’t touched the magazine. I haven’t been in contact with them until that day.’ It was literally a chance thing, which I’m really blessed and thankful for.”

Even before Fatima announced her spread in Seventeen on her Facebook page, she began receiving messages from Muslim girls all over the world who followed her on her Tumblr blog and noticed her in the magazine.

“I didn’t realize how big this thing was until it came out,” Fatima said. “All the support started coming in. People from Indonesia and the UK were messaging me on Tumblr [with], ‘We saw you in Seventeen,’ and I was like, ‘What? You guys read this?’ To me it was a weird thing because we’ve moved passed that generation where we used to read these magazines. Older Muslim women started buying these magazines for their daughters [because] it’s like ‘there’s someone that looks like my daughter in a magazine now.’ And it made think, ‘wow, this is such a big responsibility but also a huge blessing.’”

As for her role in Chime for Change, Fatima is essentially an ambassador in bringing the word out about the campaign and getting people invested in the movement and involved in projects from building schools in Pakistan to health clinics in Ecuador.

However, as with many other accomplished people, negativity always seems to arise from others. Fatima mentioned the disapproval some Muslims have expressed in her work with Chime for Change, noting that some Muslims think Beyoncé is not a good role model.

“I understand their concerns,” Fatima said, “but to have a presence around those people and for them to know who you are gives us more of a voice as Muslims within the community. For every one negative comment, there will always be 100 positive ones. And it’s hard when you want to focus on that one comment, but it’s important to know that either you can sit there and cry about it, or transfer that energy to something good.”

Fatima did not plan for her life to turn out the way it has from being invited to Hilary Clinton’s State Department dinner to her victories with spoken word. As a young, quiet girl, she imagined she would grow up to be an English teacher, married at 22, and settled down with children.

“I was a really awkward teenager,” Fatima recalled. “I was never aiming for this. This is literally just the beginning. I have so many things coming up, and there’s so much support coming in from the world, and it makes you feel so small. It still hasn’t hit me yet.”

In addition to confidence and being true to oneself, Fatima says humility is the most important quality in becoming a good role model. She also thanks all the people who have helped her along the way, as well as God.

“A lot of people get in over their heads about all of this when it happens to them,” Fatima said. “Everyone is replaceable. If it’s not going to be me one day, then it’s going to be another person. I can be replaced just like that. So be thankful and humble in what you do, and always trust God…a lot of it happened by chance. Just getting that email. It was literally God, and tomorrow He could take all of it away. I’m just trying to live in the now and not think about the future and just take it one day at a time.”

Outside of her accomplishments, Fatima is just like any other young woman. When she’s not reading or writing, she enjoys volunteering at nonprofit organizations like Inner-City Muslim Action Network (IMAN). She also spends her time hanging out with her friends, talking about topics from politics to philosophy, as well as playing around with make-up.

“I love make-up,” Fatima exclaimed. “I think it’s so much fun to play with. I think you could get really artistic with make-up. I was an art student in high school, and I showed my artistic side through make-up. Coming from a brown family, the arts aren’t something you’re allowed to pursue.”

In the next five years, Fatima hopes to travel while connecting with people and working with the State Department in some way. She also hopes to pursue a Masters or a Ph.D. in Islamic Studies. Additionally, she hopes to have published a couple of books including those on poetry and a relatable memoir for young Muslim girls.

“Don’t let anyone tell you ‘no,’” Fatima advises to young girls who are hoping to make a difference. “I feel like people tell women ‘no’ so much, and we constantly hear it. ‘No, you can’t do this ‘cause you’re a woman. No, you can’t do that ‘cause you’re a woman.’ Don’t take no for an answer, and if it’s coming from your parents, be patient with them. They really do want what’s best for you. Be really passionate about what you want to do, and stay true to it, and just trust God.  Don’t push things. Don’t force things to happen. It’ll come if it’s meant to be.”