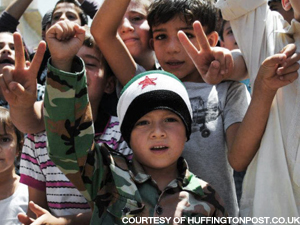 On Monday, June 17, children and teens, along with their summer camp counselors from the Muslim American Society (MAS), rallied in Millennium Park to raise awareness about the current situation in Syria. The youth walked through the park chanting, “Freedom for Syria now!”, and “Brick by brick, wall by wall, we will see Assad fall!” With their posters, banners, and Syrian flags, this new generation of Syrian activists made it clear: the Syrian civil war needs to end now.

In 2011, peaceful protests erupted into a full out civil war in Syria. Following Egypt, Libya, and Tunisia’s lead, Syrians began to speak out against Bashar Al-Assad’s regime. Unlike the other countries, Syria has not seen immediate success. Assad still maintains leadership in the country, and despite efforts by the Syrian rebel forces and outside intervention, Assad will not be moved. Now, after two years of merciless warfare, the situation in Syria is only getting worse.

According to the Huffington Post, “Syrians are being killed at an average rate of 5,000 people per month.” In response to this new statistic, the United Nations raised the overall death toll to nearly 93,000, with the majority being civilian casualties. Furthermore, Russia and Iran’s intimate relationship with the Assad Regime is causing international instability. With these countries backing up the Assad Regime, it is only further straining the path for a comprehensive solution.

Currently, the United States is considering implementing a no-fly zone in Syria. If implemented, this will be the first time since the beginning of the war that the U.S. has directly intervened in Syria. However, U.S. intervention stirs mixed feelings in the Chicago activist community.

Abrar Najjar, a 17 year old protestor said, “A no fly-zone would be beneficial, as long as the US aids Syria in the form of weapons. Only then would [U.S. intervention] be sufficient.” Among the younger protesters, the idea of direct intervention seems to be the best option. Bassem N., an 11 year old protestor from Hinsdale Middle School believes that the mindless violence in Syria needs to end. He explained that America must help them, and that aiding the Syrians with supplies is one method to end the destruction of his homeland.

As the consensus rings high among the youth that aiding Syria with either a no-fly zone or weapons would be in Syria’s best interest, MAS summer school teacher, Omar Tawil said, “We should approach this situation as a human rights issue, not as a situation in need of military intervention or political influence.”

He does not believe that supplying Syrian rebels with weapons will help end this war, referring back to Afghanistan and Libya. The best option right now is for the U.S. to promote a peaceful, multilateral strategy to end violence, specifically through the United Nations. However, using the United Nations as an outlet for aiding the situation in Syria may not be feasible due to one the United Nation’s main principles- national sovereignty (the right of the country to have independence over its territory). Intervention would infringe upon the country’s sovereign rights. Moreover, even if the United Nations were to try to pass an act for the betterment of the opposition, Russia would surely veto it.

As Fareed Zakaria (CNN host of Fareed Zakaria GPS) ponders, “the US, the Western world, indeed the civilized world, should attempt instead to dislodge the Assad regime. Is there a smart way to do it?”