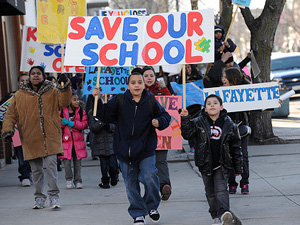 Last year, the nation watched in captivation as the Chicago Teachers Union went on strike. Hundreds upon hundreds of teachers, community members, parents–and even students–took to the streets to combat what they saw as the heavy hand of Mayor Rahm Emanuel who was dubbed by some as “The Rahmfather.” There were many supporters of the strikes as well as many detractors. “The Rahmfather” was one of the main detractors. Once the strike ended and an agreement was settled upon, optimism for education reform was in the air. However, the battle over contracts and school conditions has now turned into a war over the closing of schools.

More recently, in the month of May, two historic events occurred in Chicago: construction of 10 miles of crumbling tracks on the Red Line south of Roosevelt Road, and the closing of over four dozen public schools. Although both are occurring on the city’s South Side, one of these projects is significantly better planned than the other.

In March, it was announced that 54 schools were slated to close next year, with six more schools are set to be heavily rebooted (known as “turnarounds”). And there are a few that will be co-located with other schools. Many decried this announcement, which was called the largest single wave of school closures in U.S. history.

On Wednesday, May 22 the CPS Board of Education officials deliberated on the proposed closing of “failing” Chicago Public Schools. News stations aired the hearings live. Emotions were high as protesters comprised of parents, teachers and community members, angrily and passionately opposed each vote in heartfelt outbursts.

After the hearings concluded, the Board decided on closing 49 elementary schools and one high school in the Chicago Public School system, and just four schools will be “turnaround” schools. It was estimated that these closings will affect more than 30,000 students.

Barbara Byrd-Bennett, the newly-appointed CEO of CPS, was among the key figures in this decision. She has become infamous for her management of massive school closures, including a number of closures in Detroit, where she served as Chief Academic and Accountability Manager for Detroit Public Schools. Mayor Rahm Emanuel is also a major proponent and initiator of this decision, having appointed  the board that voted on the decision.

WGN reported the protests live via social media outside of the CPS Board of Education building:

The communities affected have long been the prey of shifty politicians. Blacks and Hispanic residents of Chicago are more often subjected to decaying neighborhoods and inferior schools. These communities seem to have tried to make less into more, despite being poverty-stricken with minimal resources. Now, with the closings at the decisive hand of Mayor Rahm Emanuel and his appointed CPS Board, these communities have been even further disenfranchised.

A number of socioeconomic factors affect the children and families that closing schools will not solve. The city will save $500 billion, which is half of its deficit, by closing these schools.The over 30,000 students that will be impacted by this decision, however, will have to live with overcrowded classrooms, new neighborhoods, longer commutes and, more importantly, the near constant threats posed by Chicago’s crippling gang violence and gun problem.

When you look at the design of the CPS system in a hyper-segregated city like Chicago, there is a broad strip of territory between destitution and comfort for many students. In other words, poor, substandard schools versus rich, exceptional schools is the overall makeup. This is why this choice to close schools and shuffle students around is major. It is inadvertently widening an already disparate education gap between affluent districts and underprivileged districts.

Furthermore, considering that black and Hispanic students are a large percentage of those affected by these changes, it becomes increasingly clear that CPS is trying to disinvest in minorities, stuff them into near-full classrooms, and put them in possibly dangerous situations, especially since many students would have to leave their home neighborhoods and cross through several gang turfs.  This attempt at reform will prove to be a costly experiment, one that threatens the lives and futures of a generation of youth of color in Chicago.

Moreover, you could also call this attempt at “reform” a cynical ploy by Mayor Emanuel to further demonize and antagonize the Chicago Teachers Union at the expense of disadvantaged students in low-income neighborhoods. But, a public official like Rahm Emanuel is nothing new to Chicagoans from those neighborhoods. He’s out of touch and out of focus, completely unaware and seemingly unsympathetic to the reality that the daily life experiences of these kids will be drastically changed because of his decision.

An English teacher, who spoke under the condition on anonymity, at Chicago Vocation High School on the city’s South Side, said this decision “will be disruptive for students, who will have to learn the mores of a new building, as each school has its own culture.  They will lose adults by whom they have been surrounded their entire educational career, and in turn have to acclimate to the new authority figures in their lives.”

Important to note in this debate is that charter schools are not the answer; they are more decentralized and lack the structural components that unionized public schools have. Take for instance the case of a Louisiana charter school that taught an alternative side of history, which was hugely inaccurate (to say the least) and undoubtedly enabled by a system which lacks curricular oversight. Even besides the pitfalls caused by this lack of oversight, the charter school system does not address the needs of a community the way the public school system can.

According to a study by CREDO, charter schools don’t really outperform public schools: 35% do better and 46% do worse. As Ben Joravsky, in his piece in the Chicago Reader stated, “There are 541 elementary schools in Chicago. Based on the composite ISAT scores for 2011—the last full set available—none of the top ten are charters. None of the top 20, 30, or 40 either.”

We have to understand that shipping kids from one school to another as if they won’t be affected, as if they won’t care, as if their educational development isn’t on the line, is completely erroneous, disrespectful, nonproductive and downright wrong.

An English teacher from Chicago Vocational said via email, “As a 12 year veteran of CPS, it’s hard to believe that they will follow through as promised.  It’s also hard to believe they have students’ best interests at heart when they (Mayor Rahm Emmanuel and members of the school board) push through initiatives (longer school day and year, less library and arts funding, increased emphasis on standardized testing) that they purposefully avoid for their own children by sending them to private schools.”

Rahm Emanuel himself has done a great job of demonizing teachers unions and persuading others, like the mainstream press, to follow suit. He has also bolstered the image of charter schools as a viable replacement for public schools, undoubtedly related to the former’s notorious intolerance of teachers unions. a. Take for instance the case of Chicago’s Youth Connection Leadership Academy. Teachers there wanted to unionize to get a better say in the policies and curriculum and they were all fired.

We cannot continue to circumvent the issue of failing public schools by presenting an option like charter schools; instead we must actually address the widespread disparity in CPS schools caused by issues at the interconnection of race, income and neighborhood.

Of the affected students, over 90 percent are African American. These statistics are not meaningless–they do and will continue to have large scale implications.

The Chicago Public School (CPS) system, the third largest school district in the U.S., has been in a near constant state of reformation efforts aimed to uplift under-performing schools and provide adequate solutions to overcrowded classrooms. Since the Chicago School Reform Act of 1989, the CPS system has attempted to address the issue of its underperforming schools, yet that measure seems now to be at any and all cost.

Because of the disproportionate resources richer schools have, students in low-income neighborhoods are perpetually disenfranchised due only to the circumstances of their birth and living situations. To put it more clearly: if you live in a poor neighborhood, you are more likely to get a poor education and you are less likely to advance economically and socially in life; this cycle could and, for some, does continue for generations.

Affluent schools have a surplus of funding and abundant resources to prepare their students more effectively, deeming them immune to the threat of closure. At the same time, students on the South Side will see their schools closed and continue to scrap for new books in crumbling buildings and overcrowded classrooms.

The city’s main goal should be to address the looming effects that failed funding policies have on education benefits for students in the Chicago Public School system. Aid formulas must be stringently revised to properly distribute funds and to use financial resources in ways that would perhaps effectively level the education field.

Putting it into perspective

Chicago Public Schools, and Chicago overall, has a problem. It’s not necessarily a gun problem or an education problem, it’s a major disconnect between those in power and those they claim to represent. Public officials like Mayor Emanuel don’t know the real implications of forcing kids out of these schools and out of their neighborhoods all in an attempt to settle a political score.

Our local government is openly demonstrating to us how it feels (or rather, doesn’t feel) about the health and well-being of a large group of young Chicagoans– it is demonstrating its utter lack of consideration for some of the most already-disenfranchised of its constituents.  As of now, it seems that the Board of Education and Mayor Emanuel are set in the closing of these schools and in the dislocation of students for purposes of trimming fat from the budget rather than substantive education reform. However, the CTU and many affected residents, seem to be geared up for this war.

Recently, CTU President Karen Lewis, along with other members, have filed lawsuits in Federal Court to halt these closings.

More recently, a group of activists, comprised of parents and students affected by this decision, paraded into the Northside of Chicago, a place where school resources and tests scores are high and closings are nonexistent, to enroll their children. A blatant attempt to display the unequal wealth and education gap and to ridicule the closures.

There is no doubt that this is a gutsy decision by CPS officials and Mayor Emanuel to try to fix a broken system, but only history will tell if this decision will actually improve the school system and the education many of these students will receive. It may take days, months or years, but we will see the real outcome of these aggressive decisions.

There is a war brewing in Chicago. The battleground is at 125 S. Clark, and this will be the war of all wars. Stay tuned.