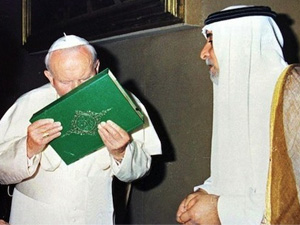 For over a year now, I have worked at a civil rights organization based in Chicago that primarily serves Muslims, despite the fact that I am not a Muslim. Many people have asked me “Why do you work with Muslims? Why do you work to help them? Is there another civil rights organization you can work for? Why do you want to defend ‘those people’?” I have even been told that I should not help defend the rights of Muslims because they are a threat to our American way of life. What is more, I have heard of acts of discrimination against women who wear hijab (headscarf). If the Virgin Mary is always depicted wearing a headscarf, then how can anyone who claims to be a Christian discriminate against Muslim women who choose to wear it?

Well, let me tell you why it is not only my choice, but my obligation as an Italian American Catholic to defend “those people.”

At this point, it is quite clear that Muslims in this country have faced immense scrutiny and discrimination since 9/11. In fact, working at CAIR-Chicago has opened up my eyes to more discrimination amongst the Muslim community than I ever thought was possible.

What is appalling to me is that many people assert that Muslims should not have rights as a minority because they take away rights from minorities (Christians) in their own countries. This “eye for an eye” rhetoric is not only completely refuted in the Holy Bible, but it is also the very same rhetoric that many Christians criticize Muslims for holding. More  importantly, this is the United States of America: home of the brave, land of the free. As American Christians, we cannot claim to be champions of liberty and freedom while simultaneously not advocating for rights for all.

As a Christian, of course it is my duty to talk about the good word of our Savior Jesus Christ, however, it is more important to follow in his footsteps by treating people as He would have treated them. Love your neighbor as you love yourself (Matthew 19:19). Morever, while people who may or may not identify themselves as Christians are busy spreading hate instead of love (complete opposite of Biblical teachings); I am instead learning about the consequences of these acts of hatred and discrimination. Through a victim’s pain and suffering, I feel as if I am able to put myself in their shoes. This is where we become connected by something more basic than faith: humanity.

Those who call themselves “Christians” and are set out to persecute Muslims simply because of their faith, have grossly misinterpreted the Holy Bible. Christians who see Islam as the “enemy” that must be defeated must have forgotten these important passages: Do good to those who hate you and love your enemies (Luke 6:27); pray for those that persecute you (Matthew 5:44); and bless those that curse you (Luke 6:27-36). Jesus never commanded his followers to fight in religious wars; rather, he forbade them from demonstrations of violence or hatred. Whether it is the crusades or the burning of Qurans, none of these are acceptable acts in Christianity; and thus should not be done in the name of it. Even though hatred is unacceptable whether you are a religious person or an atheist, it is even more unacceptable if you claim to be following in the steps of Christ.

Just as Muslims all over the world have seen their religion attacked because of a select extremist minority, I too have had my faith attacked because of a similar group. In particular, the Catholic Church has lost credibility over the years because of a few select priests with extremely disturbed minds. The pedophilia of which those priests were accused has given the Church a bad name. Now, under the leadership of Pope Francis I, it is clear that he is leading by the example of Christ through his humbleness and advocacy of what it truly means to be a Catholic. Similarly, Islam has lost credibility because of select groups such as al Qaeda, al Nusra, the Muslim Brotherhood, etc. Groups such as CAIR Chicago and the My Jihad campaign, however, are working hard to take back their faith from the hands of extremists. The fact of the matter is anyone can hide behind an ideology and justify terrible acts. However, evil is evil no matter what cloak a person decides to hide under.

I know that there are certain parts of the world where I absolutely cannot travel safely to as a Christian, let alone be able to practice my faith. Such countries include Saudi Arabia, Yemen, and Somalia amongst others. Just like I would never be able to practice my faith safely in some of these places, some Muslims in the United States feel threatened to practice Islam. When you have people shooting at mosques and wanting to burn Qurans, it becomes apparent why an American Muslim feels attacked.

If people wish to spread hatred instead of kindness, evil instead of good, or war instead of peace, they should do so on their own without any labels. They should not claim to be an American, a Catholic, a Christian, a Jew, etc., but they should just claim to be the person they really are uncloaked: a bigot. There is no need to hide behind religion as if it is some sort of shield for justifying discrimination and intolerance of others. He who is without sin can then cast the first stone.

I am by no means a perfect Catholic, but I am certain that there is importance in helping people of other faiths. To say you will not help someone just because they do not believe in your own faith goes against the basic foundations of most faiths. In a utopian society, people would be judged for their individual acts alone. While this type of society has never and will never exist, it is up to us as people of faith to treat others as we would like to be treated. After all, religion is supposed to be a tool for peace and not a mechanism to spread hatred. This is exactly why, as a devout Catholic, I chose not only to defend “those people,” but all people.