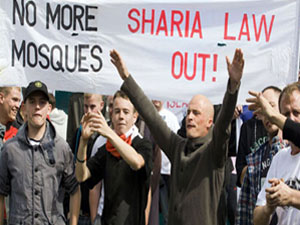 Sharia Law. The antithesis of good; the epitome of evil; the way of life that Muslims bring to the western world with the intention of undermining the democratic institution and beheading the infidels who dare to defy the Islamic way.

Or, the scapegoat used by every ignorant Islamophobe when something terrible and inexplicable happens, even when Sharia Law is completely irrelevant.

What is Sharia Law? And why are so many people so afraid of it?

Too often, the terms “Islam” and “Sharia” are used synonymously. This is usually done by those who have no comprehension of what either idea represents.

Islam is a religion; Sharia is the Law revealed by God. These two terms represent two very distinct and separate ideas.

Unfortunately for Muslims and educated people around the globe, there are always people who will use the term ‘Sharia’ incorrectly, often times deeming things that have no basis in Sharia as “sharia.” This stems from a lack of information and, too often, the stubborn resistance to accept knowledge that contradicts what they’ve learned. It is for this reason that our international society has misinformed people who create pages such as Creeping Sharia and organizations like the English Defence League.

Islam consists of two main sources: the Qur’an, and the life of Prophet Muhammad (peace be upon him). Sharia is just one way of implementing Islam in a Muslim’s life.

In Islam, Sharia is the revealed Law of God. While this description sounds simple, it is actually quite complicated. Sharia, in general, is an abstract concept; it pertains to all the laws and variations in Islam. However, there are such things as “fiqh” and “madhab,” the first of which refers to the understanding of Sharia law; fiqh varies depending on the “mode of understanding,” or madhab, that one follows which is in turn dependent on which of the four schools of thought one follows within Islam.

Basically, the interpretation of Sharia Law is dependent on many different factors, and the only person justified in making a “fatwa,” or official legal judgment on any case, is an Islamic scholar who has dedicated his or her life to the study of Islamic jurisprudence.

The average Muslim cannot go around praising or condemning people, making legal assumptions on his own, and declaring his own opinion as law. If Muslims who actually know and follow the faith cannot make pronouncements with regards to Sharia, then non-Muslims certainly cannot understand and demonize such a complicated system without truly studying it, in the same manner a constitutional lawyer dedicates his life to the study of the Constitution.

Admittedly, some parts of Sharia seem harsh, especially when taken out of context, as they often are. Sharia was not revealed to punish and condemn sinners, but to give Muslims a guide on how to live in this world. Part of that guide is about how to treat one’s parents, neighbors, family and friends. Other parts do refer to dealing with sinners, but that is because every society has those who sin and commit crimes. Even the harshest punishments are not used unless the crime has been proven by a system in which, judges are very meticulous about discovering the truth, and careful not to condemn an innocent person.

Sharia Law confuses those who look at one small facet, and ignore the whole picture. They look at one aspect of the Law, and denounce the whole system, without even understanding that law.

For example, according to Sharia Law, a person who steals must have his hand cut off. Just reading that, it may sound barbaric. There is, however, rationale behind it: it keeps people from stealing.

During the time of the Caliph Umar, the second leader of the Islamic empire after the death of Prophet Muhammad, there was a year of famine and poverty. During this year, Umar suspended the punishment for theft because he knew that people were in desperate need of food and should not be held accountable for their actions. Sharia Law is not inflexible. It accounts for differences in situation, and the decision to execute a punishment should never be made lightly.

Critics like Pamela Geller and Tommy Robinson, however, look at Sharia through one lens. The way they think of Sharia is like trying to understand a forest by looking at one tree.

This is all not to say that there are no problems with the way “Sharia” is enacted today. Rather, through exploring the reality of Sharia, I hope to demonstrate that those problems are not embedded in Sharia itself, but are politically and culturally-linked.

Holes such as Super Pacs, which allow a political candidate to receive immense loads of money from just a few people who end up partially controlling that candidate’s campaign and, if elected, their subsequent time in office.

Or holes like the PATRIOT Act, which infringes upon American citizens’ civil rights by allowing the government to spy on them and search their homes and belongings without a warrant.

Or holes like the War on Terror, in which the American government has actually begun terrorizing American citizens.

Holes that the authors of the American Constitution and Declaration of Independence did not have in mind when writing the documents that would eventually create one of the most powerful nations on earth.

Every single aspect of democracy should emanate freedom and equality, but the government we have in place now does not do that. This is because the people in charge of our welfare, the government that is supposed to look out for our wellbeing, has forgotten what it means to be a democracy. They have misunderstood what democracy means.

And if they do not know what democracy is, and use it wrongly, how can there be claims made about Sharia being undemocratic?

According to renowned American Islamic scholar Hamza Yusuf, “Democracy is absolutely compatible with the Islamic Tradition.”

During the time of Caliph Umar, Umar appointed a man named Umayr ibn Sa’id to be governor of what is now Homs, Syria. After a year of not receiving a single message or land tax from Homs, Caliph Umar wrote to Umayr telling him to return to the capital.

Umayr arrived, after having walked on foot from Homs to Medinah, and told Umar that when he got to Homs, he gathered all the righteous people in the city and charged them with collecting taxes. When he received all the tax money, he spent it on the city, giving it to those who needed and deserved it most. And the Caliph Umar, who received no money from the city of Homs or its governor, was overjoyed because he knew that he had found a virtuous man to put in charge of others, one who would put the people in front of his own needs.

Is this not what a democracy is? A government that works for the people and spends the tax money on the people. Is that not what those in the American Revolution were fighting for?

As Dr. Tariq Ramadan points out, Muslims, and followers of all religions, are provided with a “freedom of conscience,” the allowance to believe whatever one wants as long as he abides by the laws of that country, and a “freedom of worship,” the right to be a part of a religious community.

This poses no problem for Muslims because both democracy and Sharia work to promote healthy communities, give every citizen his or her freedoms and equality, defend women’s rights, and fight against injustice.