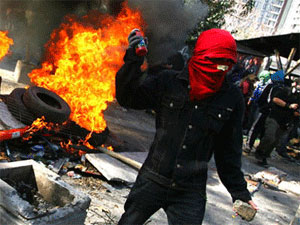 Protests continue in Santiago, Chile, where hundreds of thousands of activists have taken to the streets to protest the Chilean government. Though the country has been economically prosperous and relatively stable for many years, demonstrations have continued to signal public dissatisfaction with certain government policies. Protesters in the capital are demanding that the government address their wide range of concerns, including education reform, environmental issues, gay rights, Monsanto, and the rights of indigenous populations.

The protests in the Middle East that began in 2011 were both revolutionary and awe-inspiring; sadly, an incredibly small percentage of the protesters became violent and received an incredibly high percentage of media attention, often exacerbating the situation and/or completely commandeering the work of hundreds of thousands of peaceful protesters (for example, in Egypt, Syria, or Libya; let us hope that protests in Istanbul do not follow suit). Much in the same way, a group of violent masked protesters, referred to as “Encapuchados” (which translates to “hooded ones”; this title is likely taken from that of the infamous Colombian student protesters who acted similarly), have captured the attention of the Chilean government. The violent actions of few “[tarnish] the reputation of the entire movement,” according to one Chilean protestor.

Of course, the moment violent parties emerge in places like the Middle East and Central/Southern Asia, the media is quick to report on the matter. It is somewhat disconcerting that the actions of the Encapuchados, though extremist in nature, have been largely ignored by the media and, as explained above, only noticed by the Chilean government. It is necessary then to understand the nature of the extremist actions of the Encapuchados, and examine why there has been minimal media coverage of the event.

Media Unevenness: Is it prejudice?

The Encapuchados, in their masked outfits, have violently attacked police and journalists, and have vandalized streets in Santiago. The retaliation from police has been no less violent; they have “responded with tear gas, batons, and water cannon.” This level of violent activity, resulting in the arrests of thousands and the injury of many hundred more, should merit a decent amount of media attention. It is curious then, that little to no attention has been paid to the issue whatsoever (note: the source above is from the BBC).

Let us imagine for a moment, that these violent protesters, the Encapuchados, were Muslim or that these violent breakouts occurred in a Muslim-majoritycountry; what would be the media reaction then? Would it remain as unimportant? There is no doubt that the peaceful protesters would be completely removed from the picture and be left forgotten.

Unfortunately, it has become a media habit in the West, especially in the United States, to capitalize on violent activity by “Muslim” organizations (I use quotations to demonstrate that politically motivated organizations mask their violent activities by saying it is in the name of Islam, much as the violent Encapuchados have masked their faces). Too often, media reports create an atmosphere in which Muslims have become “the other” or, to arguably, the enemy. Whether intentional or not, the media has perpetuated an unfair image of Muslims that has attempted to tarnish the reputation of the Muslim community in many places, including United States.

It is disturbing to consider that such unjust spreading of Islamophobia is not unique to media outlets, but has been perpetuated by governmental figures in the United States, at the local, state, and federal levels. There have been a number of anti-Sharia bills introduced that are purely based on prejudice, many mosques across the country have had controversy over zoning issues with local councils, illegal activity targeting Muslims continues to occur, and many public figures, such as Peter King and Zuhdi Jasser, continue to spew prejudice remarks that marginalize American Muslims. Just this week, another anti-Islam bill that survived the Missouri Legislature had to be vetoed by Governor Jay Nixon.

Extremists – such as the overlooked Encapuchados or white supremacists here in the United States – should be handled in a manner consistent with all other violent extremists. It is imperative that the media recognize that uneven reporting is harmful to Muslims everywhere and, consequently, to justice everywhere.