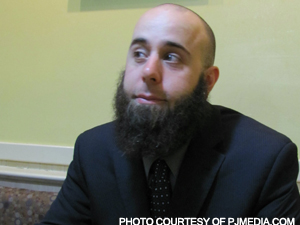 According to the Pew Forum, 9.4% of prisoners in state prisons identify as Muslim;the prisoners are turning to Islam in larger numbers than any other faith. Over half of the prison chaplains surveyed by the Pew Forum said that the fastest growing religion among the inmate population was Islam.

This is perhaps why Terry Holdbrooks’ story has attracted attention in the media. As a member of the military police, Holdbrooks’ unit was stationed in Guantanamo Bay. While there, Holdbrooks found the Islamic faith of the Muslim detainees so inspiring that he himself converted.

Terry Holdbrooks, 29, may come as a surprise to many Americans. After 9/11, Holdbrooks walked into an Army recruiter’s office in Arizona saying he wanted to “join the Army, go kill people, and get paid for it.” Holdbrooks’ unit was transferred out of Arizona to Guantanamo Bay. On the way, their unit was taken to Ground Zero. Their sergeant said to them: “Remember what Muslims did to us. Remember who you’re protecting.”

“We were not taught anything about Islam. We were shown videos of [September 11th] and all we kept being told was that the detainees were the worst of the worst – they were Bin Laden’s drivers, Bin Laden’s cooks, and these people will kill you the first chance they get.” Holdbrooks says. Holdbrooks arrived at Guantanamo Bay anticipating violent offenders in every cell – but this was not at all the case. “I was questioning things from day one. The first thing I saw was a kid who is all of 16 who had never seen the ocean, didn’t know the world was round. I am sitting there thinking, what can he possibly know about the war on terror, what could he possibly know? You start thinking ‘Was I lied to?’”

During the course of his service at Guantanamo Bay, Holdbrooks began to realize that he had in fact been lied to. He did not have a great impression of his fellow guards, describing them as “ridiculous Budweiser-drinking, cornbread-fed, tobacco-chewing drunks, racists, and bigots.” Choosing to occupy his time with more wholesome activities, Holdbrooks began to engage in conversation with the prisoners, covering topics ranging from politics to ethics and religion. His kindness towards them even earned him the nickname “the nice guard.”

These interactions cultivated Holdbrooks’ interest in Islam. “Here, I had all the freedom in the world, and I’m miserable. They have nothing, and they’re happy – it doesn’t take a rocket scientist to figure out something’s going on.” Soon, Holdbrooks was spending hours a day learning about Islam. “It made sense from beginning to end. It doesn’t contradict itself. There’s no magic. It’s just a simple instruction manual for living.”

Six months into his time at Guantanamo, Holdbrooks was ready to convert. He was warned that embracing Islam necessitated changing his entire life – not only his diet and drinking habits, but also his relationships. Holdbrooks was undeterred. “Every little step I took toward Islam, Islam was taking more steps toward me.” This conversion to Islam, however, made him increasingly discontent with his work at Guantanamo. “The detainees had a lot of freedom in their confinement. I had all the freedoms they didn’t have, but I was a slave to what the army wanted me to do.”

Eventually, Holdbrooks was honorably discharged for “generalized personality disorder,” although Holdbrooks believes his faith may have played a role in his dismissal. Upon his return to the states, he encountered troubles adjusting to American life as a Muslim. He got divorced and began drinking again. Holdbrooks realized that the last time he had been happy was while at Guantanamo – where he was adhering to Islam.

Since 2009, Holdbrooks has been clean, which he attributes to following Muslim dietary codes and his marriage to a Muslim nurse. Holdbrooks has finished a Bachelor’s degree in sociology, and spends his free time traveling with the Muslim Legal Fund of America, telling his story and hoping to encourage Muslim political activism.

Many Americans believe the lies that Holdbrooks was told about Muslims. Stories like Holdbrooks’ need to be heard. Not only is he speaking out about the deplorable conditions of Guantanamo Bay, but he is also putting a different face on Islam.