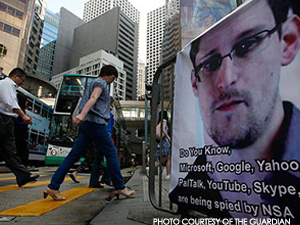 On Wednesday June 5, Glen Greenwald published in the Guardian that the NSA has been collecting metadata from tens of millions of Americans through Verizon Wireless. This information was then superseded by a series of articles containing dates when PRISM collection began for each telecommunications provider, follies within FISC, and biopics of the leaker and former CIA technical assistant and NSA employee Edward Snowden. The leak has served as a catalyst for a national discourse on how to balance the oft-opposing values of liberty and security. As nations around the world like Turkey, Syria, and Russia grapple with their governments to secure their freedoms, Americans have yet to take any large scale action against this encroachment on the first and fourth amendment.

Daniel Ellsberg, famed leaker of the 1971 Pentagon Papers, commented that “there has not been in American history a more important leak than Edward Snowden’s release of NSA material.” During Ellsberg’s intelligence career, the political unrest in America was so prevalent that Abbie Hoffman led a movement to levitate the pentagon. Since that time, however, the credibility gap between the government and the American people has widened, and the effects of that distrust are now manifest in the populace’s complacency towards expected government surveillance.

In 2006 USA Today reported on similar abuses through AT&T and Bell South, and although Senate Intelligence Committee members Mark Udall and Ron Wyden have been cautioning against the dangers and breadth of government surveillance, and calling for the American people to “evaluate” the PRISM project, there has yet to be any significant steps in modifying, let alone dismantling, the program.

Senator Feinstein, chairman of the Senate Intelligence Committee, contrastingly asserts that the NSA’s intelligence gathering has helped thwart acts of terror on US soil, and that in leaking information deemed critical to US security, Edward Snowden has committed “an act of treason.”  Pro-surveillance sentiment has been echoed in British Foreign Secretary William Hague’s rhetoric that law abiding citizens have “nothing to fear.”

Much estranged from the 60’s radical methods of protest, the most divisive response to the leak seems to be a petition on the White House’s We the People website stating that “Edward Snowden is a national hero and should be immediately issued a [sic] a full, free, and absolute pardon for any crimes he has committed or may have committed related to blowing the whistle on secret NSA surveillance programs.” 24 hours after its launch, the petition had over 25,000 signatures.

During the 2009 Iranian elections and the Arab Spring, protestors utilized social media and internet activism to effectively coordinate mass demonstrations against the ruling parties. On May 30 the US State Department lifted sanctions on the sale of telecommunication devices to Iran, presumably to foster reoccurring activism during the June 14 Iranian elections. This action to promote democracy underscores the irony in surveillance that the ACLU deems “Orwellian.”

In these instances, uproar in the cyber world has transcended technological confines to real action and tangible changes. In the NSA leak, however, online activism has expectedly become a counterproductive cop out, as activists feel heightened political efficacy without actually instituting any political or social change.

The public’s apathy is tangible; the average American voices sentiment suggesting that none of us are categorically surprised by news of the NSA surveillance program. We all still remain idle despite the growing proof of the scope of surveillance.  The court order signed by Judge Roger Vinson of the Foreign Intelligence Surveillance Court contained a provision allowing data to be monitored regardless of whether the contact “originated or was terminated” abroad (enabling for blanket spying on American citizens), that there is a massive lack of oversight in enabling agencies to put citizens under surveillance since FISC has only rejected 11 government applications in its 34 year existence, while approving upwards of 20,000, and that the NSA has failed to produce “evidence showing that the NSA’s dragnet collection of Americans’ phone records has produced any uniquely valuable intelligence.”

The sole institutional impact of the leak is thus far limited to the 3.5% decrease in stock trading of Booze Allen Hamilton after it was revealed that Snowden was a former employee.

Ironically, the leak was revealed the day before a meeting between President Obama and President Xi Jinping of China on cyber-attacks.

The leak has invoked some substantial reactions from abroad. Once Snowden was said to be in Hong Kong, officials within Russia’s Kremlin said that in the event of a US extradition request, they would consider granting Snowden political asylum. Such an offer would be embarrassing after the West’s frequent condemnation of human rights abuses in Russia.

Despite the media frenzy around the topic, no one has broached the dark and disheartening implications of these discoveries: Should programs like Prism go unreformed, our government will only continue to develop newer, more comprehensive methods of mass public surveillance. Should we continue in this current state of apathy and political immobility, we run the risk of allowing these programs to become entrenched into our system of governance until they can never be dismantled- until they become accepted and commonplace within American society.

Two hundred years ago founding father Benjamin Franklin, astutely aware of the threats of this mentality, warned, “those who would give up essential liberty to purchase a little temporary safety deserve neither liberty nor safety.”