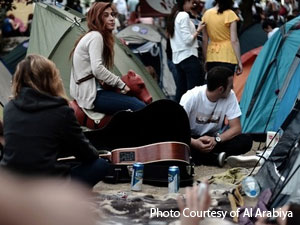 Two weeks after clashes between protesters and police began in Istanbul’s Taksim Square, it is clear that the protests in Turkey stem from deeply complex tensions in Turkish society.

The protests began in Taksim as environmentalists contested plans for development in adjacent Gezi Park. Demonstrations quickly spread across the country, absorbing different factions concerned with Prime Minister Erdogan and his AK Party’s actions. Protesters have occupied Istanbul’s Taksim Square, Ankara’s central Kizilay Square, Izmir, Edirne, Adana, and other cities, and have been exposed to tear gas and other violence in clashes with police.

While the idea of a divide between secularists and pious Muslims has pervaded media and popular discussion, the complex composition of the protests reflects a Turkish society that is not strictly divided between the secular and pious, or middle and working class. Rather, the popularity of the protests speaks to the holistic dissatisfaction within a multifaceted Turkish society of a government that has introduced significant reforms while preventing discussion of its actions on a national level.

Various news sources have referenced the diversity of Turks represented within the protests, including Alevi Turks, members of rival soccer teams, practitioners of yoga, older Turks, pious Muslims, gays, and a host of other groups.

Erdogan is traditionally backed by religious working class citizens, as well as a new urban middle class of observant Muslims.  His rise to power as mayor of Istanbul, and then prime minister, however, sparked fears among secularists that he would transform Turkey into an Islamist state.

These fears carry potential to contribute to a divide between secular and pious citizens in Turkey. In recent years, secularists have echoed the slogan “Turkey will not become Iran”.

Since Erdogan’s election in 2007, both secular and religious factions of Turkish society have become increasingly discontent with the social reforms introduced by his Islamist-leaning AK Party. Recent legislation attempting to restrict abortion and the consumption of alcohol drew opponents from a diversity of religious backgrounds. On May 24, legislation passed banning the sale of alcohol from 10pm to 6am and prohibiting distribution within 100 feet of mosques and schools. Laws such as this have potential to perpetuate the binary between the secular and pious, under what Author Andrew Finkel describes as a“drink apartheid.”

This possibility does not reflect tangible divides within Turkish society so much as it reflects the potential for Erdogan to exploit religious distinctions to draw supporters. The AK Party’s actions reveal its acute consciousness of this potential, as they purposefully imbue their politics with religious connotations. Erdogan himself hails from a pious, working-class neighborhood in Istanbul, and has used his background to gain support among working-class Muslims throughout Turkey.

In a speech on Sunday, Erdogan accused protesters of “insulting my headscarf-wearing daughters and sisters” by entering a Dolmabahce mosque wearing shoes and carrying alcohol. The mosque’s imam and muezzin have denied these allegations. Dolmabahce was one of several mosques around Taksim Square that functioned as a makeshift medical center to treat those injured in clashes with police.

Erdogan’s invocation of the headscarf highlights the centrality of the hijab in current debates about coexistence between secularism and piety. Women wearing headscarves were not widely represented at the protests. Some protesters wearing headscarves cited social pressures and  fears of unfriendly sentiment as inhibiting their ability to more actively protest.

The rise of an urban pious class brings secularists and the overtly religious into daily contact through economic activity. Through these interactions, secular Turks come to recognize that the headscarf carries multiple meanings for individuals, and does not necessarily equate to staunch support for Erdogan’s policies.

The group “Anti-Capitalist Muslims,” comprised of students, activists, and working-class citizens, has expressed dissatisfaction with Erdogan’s neoliberal economic policies, which they attribute to greater class divisions and the marginalization of Turkey’s poor. In May 2012, they organized and joined a demonstration in Taksim Square against unsafe working conditions and restrictive labor laws. During protests in Taksim Square on June 5, Anti-Capitalist Muslims organized a Qur’an reading to commemorate the day of the Prophet Muhammad’s (PBUH) ascension into heaven. Two days later, members led Friday prayers in Taksim to honor the three killed and approximately 5,000 people injured in the protests.

Turkey’s labor unions have also expressed support, attending demonstrations and executing strikes and walkouts to contest the police and Erdogan’s response to the protests.

Support for the protests from the working class and the overtly religious is significant, as it also draws from the population that has historically backed Erdogan. Views such as those of the Anti-Capitalist Muslims highlight the inconsistency in correlating Erdogan’s neoliberal policies with pious, working class support.

The AK Party has also instituted the transfer of Istanbul University’s botanical gardens to the Istanbul Mufti’s office. While the Mufti’s office cited past religious ownership of the property as a reason for the expropriation, one prominent biologist speculates that the transfer came only after private companies expressed interest in the property.

Erdogan is scheduled to meet with protesters today. He has renewed police presence in Taksim Square, and has introduced measures to hold twitter users legally accountable for inciting violence.

Turks are uniting across class and religious distinctions in protest of a state that intentionally aims to manipulate these differences to strengthen control of Turkish society.

Regardless of these divisive efforts, sections of Turkish society continue to collaborate in demanding respect for their universal right of expression. The outcome of these protests now depends on whether protesters continue coordinating and effectively contesting the AK Party’s extensive economic and legal maneuvers without falling prey to the party’s divide-and-conquer rhetoric.

What’s in a name: Challenging the word “Islamist”