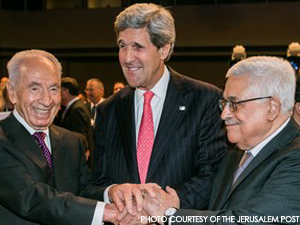 Though U.S. officials are currently debating how best to arm Syrian Rebels and also deciding what course of action should be taken after North Korea’s recent proposal for high-level discussions, they are still hoping to, once again, open the door for peace talks between the Palestinians and Israelis.

2004 Presidential candidate and current Secretary of State John Kerry will reportedly visit the region in the near future after cancelling a planned trip last week.  The goal of these trilateral negotiations has been to reach a peace agreement in the form of a two-state solution. With the opportunity for a two-state solution deteriorating, there is more urgency now than ever before. Call me cynical, but where have I heard that one before?

Getting both parties to the table to discuss will be a task in and of itself for Kerry. The Palestinians have maintained that all settlement expansion should cease before any negotiations begin, claiming that such activity directly conflicts with the stated goal. PLO Chief Negotiator Saeb Erekat has suggested that a recent decision by the Israeli government to build 1,100 illegal settlements in East Jerusalem is “effectively destroying the efforts of Kerry.” Without a settlement freeze, the Palestinians do not believe there is reason to negotiate, since the expropriation of Palestinian land is precisely the Israeli practice that is destroying the opportunity for an independent Palestinian state.

The Israeli government, meanwhile, refuses to consider such preconditions for negotiations. Israeli Prime Minister Benjamin Netanyahu has insisted that it is time to “stop squabbling over preconditions” and resume negotiations. Demanding preconditions, he holds, is a Palestinian tactic to negotiate before even stepping up to the negotiating table.

Netanyahu fails to understand – or, more likely, he knows very well – that by demanding a settlement freeze, the Palestinians are not merely “squabbling over preconditions”; rather, they are forcing Israel to provide a context under which a legitimate two-state solution can be delivered. Announcing the expansion of settlements only weeks before Kerry’s scheduled trip is a deliberate mockery of Kerry’s initiatives and directly undermines the peace process.

The long-time Israeli practices of home demolition and settlement expansion – both illegal under international law – are actually not in line with US policy; in fact, they have been expressly opposed in every administration since that of President Lyndon B. Johnson. More recently, President Obama has stated that “the United States does not accept the legitimacy of continued Israeli settlements. This construction violates previous agreements and undermines efforts to achieve peace.  It is time for these settlements to stop.” The US has, nonetheless, maintained its unconditional military support in the amount of $3.1 billion per year despite their intransigence.

Considering the outcome of past negotiations – and the fact that the United States says it will only make attempts at a peace process, but then withdraws quickly if they seem to be failing – there will likely be a gap between what should be expected and what can be expected; that is, there is a small window for opportunity that the parties must capitalize on, otherwise the current situation will remain.

What should be expected from both the Palestinians and Israelis is a willingness to partake in the suggested confidence-building measures. Israel should halt settlement expansion to bring the Palestinians to the table. The negotiations should first outline exactly what a two-state solution would look like and then provide a step-by-step timeline under which such a solution can be delivered, with the U.S. being a mediator when necessary. The outcome would be what all three parties have expressed for years: two independent states living side-by-side in peace. For all this to occur, it should also be expected that the United States would maintain its position as an honest broker between the two parties.

Of course, such an outcome is far easier said than done. Let us assume that both parties are able to begin negotiations once again – meaning that the Palestinians came to the table while Israel continued to build illegal settlements in Jerusalem or the Israelis were forced by the U.S. to halt their activity. It can then be expected that time will be spent deciding what means will help them reach the desired end. Some confidence-building measures will be made by both parties. Sadly, this is the extent to which I am optimistic simply because the United States has been ineffective in forcing the Israelis to comply with their expectations. Unless the United States is better able to serve in its role as an honest broker, a reasonable solution will be impossible.

It is likely that both John Kerry and Saeb Erekat become frustrated with the Israelis again (proof of this can be found in Clayton Swisher’s book The Palestine Papers – a collection of leaked meeting minutes between the Palestinians, Israelis, and the U.S.) and time will be wasted finger-pointing. The book outlines how Israeli Foreign Minister Tzipi Livni is completely unwilling to even discuss Jerusalem (literally), even after Erekat was willing to make sacrifices that both he and President Mahmoud Abbas swore they would never make. There are a number of points in the book in which then-Secretary of State Condoleezza Rice insisted the Israelis should introduce verbiage regarding security measures; in a package offer from Ehud Olmert, there was not a single mention about security apparatuses. These are merely two frustrations that became apparent throughout the negotiations.

It should be made clear that it is the Palestinians – not the Israelis – that stand to lose from failed negotiations. This has been the case in the past and it seems that Israel has continued to take more and more, leaving the Palestinians with virtually no outlet. If negotiations fail and the status quo is maintained, then Israel will continue to prosper as living conditions deteriorate in the Occupied Palestinian Territories.

Insanity, according to Einstein, is the process by which an act is repeated over and over again while expecting a different outcome. Negotiations have carried on for years and have failed, with the Palestinians ending up on the short end of the stick each time. Failure to broker a peace between the parties has begun to affect the U.S.; the entire world is becoming frustrated with the so-called “peace process.” Expectations are high and the U.S. cannot afford to continue its failures in the region. Here’s to hoping that the United States, the world’s superpower, can use its power to help realize peace between a dominant state and its occupied neighbor.