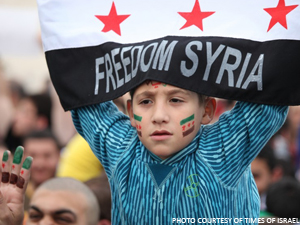 It has been over two years since the outbreak of civil war in Syria and there remains no clear end in sight. Rebels, unorganized and without sufficient military support, continue their efforts to depose Bashar al-Assad. At the same time, Iran, Russia, and now Hezbollah have increased their support for the Assad regime. Hezbollah’s involvement has recently been confirmed by Sheikh Hassan Nasrallah.

Meanwhile, verbal attacks against the Assad regime’s violence by the Obama Administration and other US allies have been plentiful but entirely ineffective.

Some experts have insisted that NATO forces be put into action before the situation gets too out of hand. Others, like Professor John Mearsheimer of the University of Chicago, insist that the United States and its allies are unlikely to get involved if their interests are not threatened; it seems that Mearsheimer’s arguments hold true. The lack of involvement by the U.S. and other western governments has been criticized heavily by anti-Assad supporters worldwide. However, none of the governments have felt they had any legitimate need to involve themselves in a tricky, deeply complex civil war.

That is, until now. After some speculation, the United States claims to have confirmed that Syria has crossed the “red line.” Last week, the White House announced that the Assad regime hasused chemical weapons in its fight against Syrian rebels. Analysts claim that the use of chemical weapons will certainly change “Obama’s calculus.”

Russia, meanwhile, has claimed that these assertions have been fabricated by the United States government. Russia will continue to use their veto power in the United Nations Security Council if any action is taken against the Syrian government. During the G8 Summit in Northern Ireland this past week, little changed. While Putin, Obama, and the others agreed that there needed to be negotiations, they remained severely split on the methods to reach a peace agreement.

Though it was clear that chemical weapons had been used in Syria, the Obama Administration took its time “making a determination on who had used the deadly agents.” According to reports from the G8 meeting, it seemed that Prime Minister David Cameron was as hesitant as Obama and President Hollande to make any move in Syria. The United States is feeling the pressure from the international community to make a move in Syria, but it is clear that – with no real interests, other than the claim of concern on a humanitarian level – the United States will stop short of involving itself in the Syrian Civil War. It may spend some effort fighting the battle from the outside or, at most, support the presence of NATO forces in Syria.

The potential enforcement of a no-fly zone in Syria has gained increased attention from analysts since the Obama Administration has promised it will take action. No-fly zones are aimed at limiting or altogether demolishing the ability of the opponent to use airways in their military activity. But how effective would a no-fly zone be?

At the moment, only ten percent of Syrian rebel casualties are caused by air power. While Syria has the ability to increase its use of air power according to General Martin Dempsey, this percentage is still too low to consider stopping it to be a substantial victory for the rebels. It would seemthat establishing a no-fly zone could not only be relatively ineffective, but could even draw the United States more into the conflict. For the United States, trying to enforce a no-fly zone (at this point in time) would hurt them more diplomatically than it would help them reach their goals. At any rate, the United States has yet to commit to any specific actions.

While the United States and others claim they will now increase support for the rebels, presumably ramping up the number of arms being given to the opposition, it can be argued that anything short of ground support would ultimately be ineffective.

As it stands, the likelihood of ground support being provided to the opposition is slim. It is far too risky for the United States to directly involve itself militarily in the struggle and it is unlikely that U.S. allies would be willing to unilaterally involve themselves either. This much has been clear from the beginning; a group effort to put together NATO troops is the other option. With the aforementioned veto power of Russia in the UN Security Council, it will be more difficult for NATO troops to deploy.

In the unlikely event that Russia allows NATO troops to deploy, it is necessary to consider the result of NATO involvement in Kosovo during the late 1990s. Bombing campaigns were carried out by NATO to fight off Yugoslav forces battling the Kosovo Liberation Army (KLA). Though western governments claimed victory, we should consider how many Albanians became refugees as a result. We should also consider that the UNHCR, the agency primarily responsible for refugees, had their budget cut in both 1998 and 1999, even though U.S. intelligence knew the outcome of NATO’s military presence.

While there is a serious humanitarian concern, involvement of the U.S. and the west will likely worsen the situation. The apparent disinterest by the United States of getting involved in the Syrian conflict, coupled with a highly complex situation and a history of less-than-stellar planning, only spells trouble for the world’s superpower. The U.S. must act, but – speaking strictly in the interests of the country – it would not be wise to do so militarily.

A Step Forward: Religious Accommodation in the Military