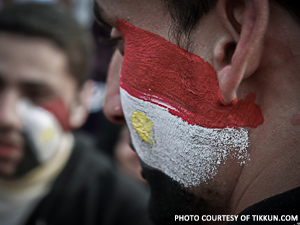 It seems like only yesterday the world watched as Egypt held only the second Presidential election featuring more than one candidate in its history. The election came on the heels of the Egyptian Revolution in 2011. It has been, in fact, a little over a year since the main election was held on June 16th and 17th in 2012. The election, which followed the removal of President Hosni Mubarak after 30 years in office, ended with Mohammed Morsi, a member of the Muslim brotherhood, winning election with 51.7% of the vote over Ahmed Shafiq’s 48%.

Recent days, however, have proved that even Morsi, a democratically elected President, is not immune to the will of the people. On July 1st, the Egyptian military threw its support behind the Tamarod rebels, and gave the President 48 hours to “meet the demands of the people.” The support from the country’s military intensified the protestors, who were threatening civil disobedience if President Morsi did not step down. Protestors, many of whom are struggling economically, called for the President’s removal, citing the poor economic conditions and the failure of Morsi to distance himself from the Muslim Brotherhood to install reforms to help the people. The protests, much like those of the revolution of 2011, are fueled by social media organization efforts on Facebook and twitter. After President Morsi failed to comply with the 48 hour deadline, he was removed from office on July 3rd, 2013.

The situation in Egypt raises a larger question about the current state of Egypt’s political climate, and the political system of the country itself. In the 2012 election, Morsi received nearly 13.3 million votes. And yet, protestors and demonstrators told CNN that they, as of July 1st, had 17 million signatures telling President Morsi to step down. This shocking statistic makes us question the very nature of our democratic process, the one used to initially elect Morsi. How is it that a candidate winning with a majority of 13.3 million votes, in only a year’s time can be removed from power by an even greater number of citizens?

Rabab el-Mahdi, a professor at American University in Cairo, speaking to the New York Times, said “While they are communicating for the people, they are not figuring out how to organize people within the political process itself other than calling on them to protest.” Dr. el-Mahdi’s statement begs the question, is President Morsi and the backlash against him an isolated incident, or does this perhaps speak to a larger problem with democracy? A problem of inaction, inefficient organization, low voter turnout, and of a grass is always greener mentality. The enormous numbers of protestors, so disenfranchised with Morsi to take to the streets, force us to wonder, where were they when the votes were being cast? As one Morsi supporter puts it: “If the opposition really has the ability to bring out millions of protesters and collect millions of signatures, why can’t they get all of those people to vote in elections?”

Turnout in the 2012 Egyptian presidential election was reported at 51.58%. And before we all gawk at the fact that only half of the country voted in what was certainly a historic election for Egypt, it is important to consider the current state of democratic elections in our own backyard. The 2012 U.S. Presidential election, an election many viewed as a referendum on the direction our country would take for the next decade, only managed to turn out 57.5% of the country. Moreover, the 2008 Presidential election, the election that saw the first African-American President-Elect in Barack Obama, turned out only slightly better at 62.3%. Voter turnout is an issue, not just in Egypt, but right here at home. My father always used to tell me “If you don’t vote, then can’t complain about anything for the next 4 years.” As much as I rolled my eyes at that growing up I see now that that is certainly true.

Voter turnout, however, is only a small part of the problem. The larger problem is the mentality that perhaps the grass is always greener on the other side. We see it in our own country, with the constant alternating between which parties control the legislature. And now, we are seeing it in Egypt, where 17 million people are calling for the resignation of a man that they themselves elected just 12 months prior.

President Obama, speaking during his recent trip to Africa, affirmed a commitment to Egypt. He did not, however, support one particular side, rather stating that the U.S. is committed to the democratic process in general. President Morsi’s supporters in Egypt echo the same sentiment. One supporter, speaking to CNN, said “We believe in democracy. If people don’t like him, they can vote him out in three years.” This belief in the democratic process is crucial, but the process itself can only be effective if we all commit to it.

Regardless of the side you find yourself on in the situation in Egypt, the current political unrest gives us an opportunity to look at the democratic process in general. It provides us with an opportunity to have a discussion about the current state of voter turnout, not just in Egypt, but here in the U.S. The 2012 Presidential Election saw less than 2/3 of the country come out to vote. It is important that we as a society begin to not only be aware of these issues, but to take steps to correct them. We have the power to shape what our country becomes, and like my dad always said, “If you don’t vote, you can’t complain.”