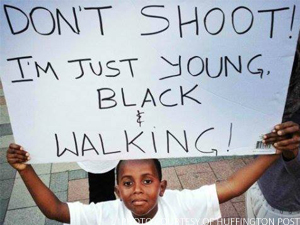 On July 20, 2013 the jury presented a verdict of not guilty in the George Zimmerman case. A wave of rage, disappointment, and sorrow then stretched across the country as demonstrations erupted in Los Angeles, New York, Saint Louis, Atlanta, and Chicago. People around the world vented frustrations and expressed personal reflections through social media. News sources spewed various perspectives on the trial process and the discourse surrounding Justice 4 Trayvon . Obama recently presented more personal remarks addressing the impact of the case in relation to race in America.

The relationship between race and the criminal justice system, however, remains the root of the outcry, and an issue that still needs to be addressed through direct action and systemic change. Observers pinpoint racial profiling as an issue leading to the Martin incident and others similar. Legislators, such as, Sen. Benjamin Cardin consider the Ending Racial Profiling Act as a possible solution to the harm caused by racial profiling policies.

Congress has introduced the End Racial Profiling Act (ERPA) six times since 2001 to eradicate racial profiling. ERPA is a stance for needed systemic change stopping incidents where we lose the lives of our youth and young adults. ERPA includes a plan to end the practice, increase competencies to prevent it, and provisions to protect civilians. The Act:

In the Trayvon Martin case, the  central concern is how citizens of color are targeted by law enforcement and civilians because of their appearance. The night of February 26, 2012 became a spark in the continued conversation on racial profiling. The discourse emphasizes larger systemic issues of criminalization according to race that plague our criminal justice system and relations in our multiracial society.

“He [Trayvon] was profiled, followed, chased and murdered. This case has captured international attention and will go down in history as a textbook example of racial profiling,” said U.S. Rep. Frederica Wilson (D-Miami).

Martin Bashir of MSNBC presented his three most important facts. A man with a gun targeted an unarmed teenager and their confrontation resulted in the teenager’s death.  As various contributors have presented, race very well played a role in the sequence of events, along with stereotypes and prejudices that communities of color deal with every day. Even if Zimmerman’s character, or the immediate reasons for his actions, may not directly pinpoint race as a factor, the role of race in heightening criminal suspicion does not make this case an anomaly. Martin fit a profile. So much so that Zimmerman did not just call the police, but took it upon himself to confront an unarmed teenager with a gun on the grounds of criminal suspicion. As in previous cases, a profile defined the intentions and actions of a young, male of color.

It is not just Trayvon Martin. It is Jordan Davis, Jimmell Cannon, Aiyana Jones, Oscar Grant, Sean Bell, and Amadou Dialla whose lives were ended by the violence of heightened criminal suspicion and false expectations. Such suspicion and expectations are born from the structural perpetuation that Black youth and young adults are criminals. They were men and young boys who fit a profile. They were perceived to present a threat. Actions were taken which took their lives, but they committed no crime. They were unarmed.

When compounded with disproportionate media coverage of Black and Brown crime, disproportionate incarceration rates, and punitive policies used in law enforcement, communities of color experience a cyclical process of criminalization along the lines of race and fear.

Academic bell hooks emphasizes how criminalization according to race and fear of Black youth leads to destructive action. She also presents how the intersection of Zimmerman’s privilege and power set the stage for the incident with Trayvon Martin. hooks introduces the role of white supremacy, patriarchy, and capitalism as institutional influences guiding Zimmerman’s thoughts and actions in profiling, following, and confronting Trayvon. Such institutions become argumentative pillars in the defense of Zimmerman to “protect our property at all costs from any sense of perceived threat” and used to justify his actions in taking Martin’s life.

In addition to the role of privilege and power, Angela Davis explains in her article, “Race and Criminalization”, that fear of Black people is gravitating towards a fear of crime. This gravitation can be displayed in how media covers crime, the mass incarceration of Black and Brown males, and the results of law enforcement policies such as racial profiling. With this, such processes constantly reinforces criminalization according to race.

Incidents of presumed criminal activity disproportionately involve people of color and lead to innocent people being targeted for crime. Consequently, communities of color then become criminalized and become a conscious and unconscious reference to criminal activity when reality does not reflect that perception. Trayvon Martin, along with many others, fell victim to this process. With this, it’s not just Trayvon Martin. Racial profiling constantly makes all innocent youth and young adults of color, who fit a profile, a target.

Research data from the Justice Department and American Civil Liberties Union (ACLU)  presents how racial profiling disproportionately targets people of color for criminal activity. People of color are two to three times more likely to receive criminal suspicion than whites in various cases. However, a small percentage of such stops end in arrests or resulted criminal activity, whereas whites are two to three times more likely to have committed a crime in some instances. The over-classification of people of color and unproductive outcomes makes the long term use of racial profiling ineffective. All that’s left are cases of victimization and criminalization.

It is not just Trayvon, or just the Black community. His case also carries the weight of the destructive results of profiling in the Muslim and Latino communities. The experiences of racial profiling across different communities are not mutually exclusive. The trend across communities show that similar policies of profiling used in street policing, counterterrorism, and immigration set a precedent that certain communities produce criminal activity, including Muslim Americans being prone to terrorist activity or Latinos as being undocumented. Currently, Martin’s case acts as a lightning rod for the storm of issues involving violations of civil rights and the loss of life from racial profiling.

Racial profiling has become institutionalized, and as a result various communities of color are consistently, disproportionately targeted as suspects and become criminalized through similar processes. We need to acknowledge the common process of criminalization introduced by racial profiling and that Trayvon’s case represents the broader issues of profiling across different communities. This reinforces the need for organizing and advocacy across communities to push for systemic change. The End Racial Profiling Act is one way to move forward.

What you can do:

Call and Mail letters to your US Congressional Representatives urging the passage and swift implementation of the End Racial Profiling Act.

Engage local civil rights and advocacy organizations to educate communities about their rights when they encounter law enforcement.

Urge local civil rights and advocacy organizations to release statements and launch issue campaigns supporting the passage of the End Racial Profiling Act and the end of racial profiling.