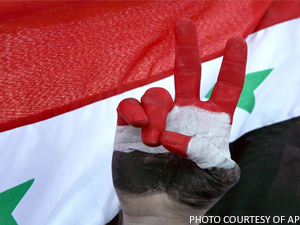 “Hands off Syria-no new wars!” and “Money for jobs and education not for wars and occupation!” were some of the many chants that protesters from all over Chicago cried out on Tuesday July 2, 2013. For the past three Tuesdays, members from the Syrian American Forum, Anti-War Committee, Occupy Chicago, the Anti-War Coalition, and several other activists have joined together at Federal Plaza to raise awareness against the dangers of arming rebels in Syria. Next Tuesday, July 9, there will be another protest for peace as part of a nationally coordinated call to action. With their posters, banners, and official Syrian flags, these activists have made it quite clear: arming rebels in Syria is the contradiction of peace.

“Regardless of how this conflict began, it has become an intervention; this is not a popular uprising,” states activist John Ztachelzkij. He further states, “When you watch the images of this conflict on TV, you don’t see what you see in Egypt. You don’t see these masses of people out there demanding democracy from a government. What you see is armed insurgents and you can tell that the character is different.” Among the older protesters, arming the rebels would seem like a repeat of what occurred in Afghanistan in the 1980’s.

On the other hand, there have been several protests around the city in favor of the Free Syrian Army (FSA), the most recent in which young children rallied in Millennium Park. As numerous as these counter protests may be, they represent a very small minority of what the Syrian people actually want. In May 2013, NATO studied data that confirmed a sharp increase in support of Syrian President Bashar al-Assad. According to the data relayed to NATO over the last month, 70% of Syrians support the Assad regime. Another 20 % identify as neutral and the remaining 10% support for the rebels. While rebel supporters refuse to acknowledge these numbers, there are other atrocious acts that have occurred by several groups within the opposition.

According to the Associated Press, “The Nusra Front has emerged as the most effective rebel force fighting to oust President Bashar Assad.” In addition, the group took responsibility for some of the deadliest suicide bombings against Syrian government institutions and military facilities. “Concern about the Syrian al Qaeda-affiliated group Jabhat al-Nusra, is at an all-time high, according to a private sector analyst; with as many as 10,000 fighters and supporters inside Syria.” More importantly, the United States formally designated the militant Syrian rebel group as a foreign terrorist organization.

While suicide bombings have killed many innocent civilians, more brutal attacks have occurred at the hands of the rebels. Dr. Matar Matar, who is a member of the Syrian American Forum, sends a message to President Obama by stating, “Mr. President you are arming rebels that are beheading Syrians, killing school children, destroying places of worship and looting historical places of Syria.” Recently, the Vatican confirmed that Father Francois Murad, a Syrian Roman Catholic priest, was killed in the convent of the Custody of the Holy Land in Ghassaniya on June 23, 2013. The Custody of the Holy Land, a Franciscan order which is the official custodian of religious sites in the Middle East, issued a statement about Father Murad’s murder: “Islamists attacked the monastery, ransacking it and destroying everything,” it said. “When Father Francois tried to resist, defending the nuns, rebels shot him.” Another brutal attack occurred in December 2012 when rebels beheaded a Syrian Christian and fed his body to the dogs. According to the Huffington Post, “Sister de la Croix, who is mother superior of the Monastery of St. James the Mutilated between Damascus and Homs, said: ‘They beheaded him, cut him into pieces and fed him to the dogs.”’

These types of atrocities committed by rebels are numerous in Syria. In fact, the top official for the United Nations warned rebels that they will not be immune from the gruesome acts of terror they commit. At the rally for peace in Syria, there were many graphic signs depicting the gruesome atrocities that rebels have committed. “Taking videos and pictures of beheadings and killings is an honorable act for rebels. They want the whole world to see what they are capable of,” states Dr. Matar. Another protester who wishes to remain anonymous states, “I am sick of all these people who are portraying the FSA as saints. I just came from Syria and I saw with my very own eyes, members of the FSA use women and children as shields.” He further states, “My neighbor from my village was kidnapped and held for ransom by the FSA just because he is Christian. I never wore my cross in my village because they would have kidnapped me too.”

The current controversy surrounding arming the rebels comes shortly after claims that President al-Assad used chemical weapons on his own people. However, the Syrian government has denied such allegations and has instead accused the rebels of using them. According to a recent NBC News/Wall Street Journal poll, 15% favor U.S. military action in Syria; 11% want to provide arms to the opposition; 42% prefer to provide only humanitarian assistance; and 24% believe the U.S. shouldn’t take any action. “The well trained rebels are extremists and fundamentalists. If the rebels fail, are we going to arm them forever? Who is going to pay for that? The American taxpayers are going to have to pay for that!” states Dr. Matar.

“Qatar, Saudi Arabia, Israel, and the U.S. don’t have interests of the Syrian people in mind. They are not trying to promote democracy, but what they are trying to do is to install a puppet client state for Israel and the Middle East,” states Ztachelzkij.

It is estimated that the conflict has claimed more than 100,000 lives. “We need peace in Syria. Arming the rebels will destroy the whole country and the whole Middle East,” states Dr. Matar.

Standing up for justice: an activist’s guide on Palestine