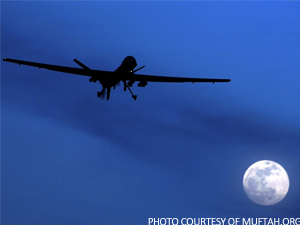 In the years after 9/11, an increasing number of U.S drones are being used to target individuals overseas who are considered an imminent threat to our national security. At the same time, we are also realizing that many of those who fall victim to these attacks are not terrorism suspects, but non-combatant civilians, women, and children, or as the administration casually refers to them, “collateral damage”.  A single drone strike in Afghanistan killed 10 children in April of 2009.  Since then, hundreds of children have been killed in similar strikes, even as President Obama insists that drones “strikes will only be authorized against terrorists who pose a “continuing and imminent threat” to Americans, and when there is a “near-certainty” that civilians will not be killed or hurt”.

Drones are not only used as weapons of war overseas but that they are also used on U.S soil for various surveillance purposes, slowly becoming a fixture of American society.

Unmanned Aerial Vehicles (UAVs), commonly known as drones, are pilotless aircrafts operated from ground stations by remote control. Often, the operators are piloting the drones from two continents away; one of the largest ground stations for drone operations in Afghanistan is based in Nevada. Some drones can even function without operators. These fully autonomous UAVs can operate almost entirely independently, using only pre-programmed plans and instructions.

Drone technology has a number of applications, with missions ranging from information gathering, data collection, around the clock surveillance, to direct targeted killings. In the U.S, drones have been used to monitor and film individuals without their knowledge or consent. Some of the specific current capabilities of drones include: high-power zoom lenses, night vision, see-through imaging, and video analytics.

While drone technology is steadily improving, and the cost of obtaining a drone is declining, the safeguards and regulations to protect the privacy of Americans do not seem to be evolving at the same pace. If regulations continue to lag behind drone development, practices, such as those described above, will likely move us toward becoming a “surveillance society” and “police state” in which the privacy of citizens is undermined and infringed upon. In addition, there are many negative psychological and sociological effects on a public that feels as if they are in a constant state of surveillance.

According to the American Civil Liberties Union (ACLU), “Based on current trends—technology development, law enforcement interest, political and industry pressure, and the lack of legal safeguards—it is clear that drones pose a looming threat to Americans’ privacy.”

Even though the Federal Aviation Administration (FAA) has indicated safety concerns with regard to drone deployment throughout the nation, it is under continuing pressure from the drone industry, its allies in Congress, and various law enforcement agencies around the nation to relax its opposition to drone use.

Furthermore, according to the Congressional Research Service reports, the Federal Aviation Administration Modernization and Reform Act of 2012 directs the FAA to integrate the use of drones into the national airspace system by September 2015.

According to the ACLU, drone usage is making its way into local law enforcement agencies around the nation:

“The police department in rural Mesa County, Colorado was granted permission from FAA in early 2011 to operate its Draganflyer drones anywhere in the county; Miami police have also won permission to test drones; and Police in Houston, Texas attempted to carry out secret tests of a drone in 2007. The Texas Department of Public Safety has been using unmanned surveillance aircraft for specific police operations.”

In the midst of this controversial drone debate, it is reassuring to know that the Illinois General Assembly has recently passed the Freedom from Drone Surveillance Act, Senate Bill 1587, with an overwhelming majority. It is even more encouraging to know that Evanston, Illinois has become the third city in the nation to adopt a ban on the use of drones within its borders. However, as a nation, we are far from banning drone usage in all of our cities and towns.

Senate Bill 1587 awaits Governor Quinn’s approval to regulate the use of drones in the State of Illinois. His action will prove to the nation that Illinois continues to be a leading state in protecting civil liberties and social justice.