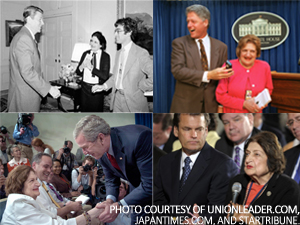 Fidel Castro once said that the difference between democracy in Cuba and democracy in the United States is that “I don’t have to answer questions from Helen Thomas.” During her 70 year career, journalist Helen Thomas was renowned for her unabashed questioning of US politics, and her remarkable tenure in the White House Press Corp, spanning ten American presidents, from Kennedy to Obama. She served as the first female president of the White House Correspondents’ Association, the first female member of the Gridiron Club, as well as the first female officer of the National Press Club.

Born in 1920 Kentucky to Lebanese immigrants, Helen Thomas was raised with an extraordinarily high level of political efficacy. Her parents never learned to read or write in English, but in describing her identity she stated that “We were never hyphenated as Arab-Americans. We were American, and I have always rejected the hyphen and I believe all assimilated immigrants should not be designated ethnically. Or separated, of course, by race, or creed either. These are trends that ever try to divide us as a people.”

In 1943 Helen Thomas became a radio wire service reporter in Washington DC for United Press. Over the decade, her beat expanded from women’s issues to covering the Department of Justice, Capitol Hill, and eventually the White House. An eternal pioneer for women in journalism, Helen Thomas won the right for women to attend the 1959 luncheon where Nikita Khrushchev delivered his infamous “We will bury you” speech. This was partially with the help of the former Soviet Primer, who would not speak if women were barred.

Her first presidential story was published in 1960, focusing on the Kennedy’s family trip to Florida. Her stories became increasingly pervasive in American media, and President Lyndon Johnson cited that he even learned of his daughter’s engagement from a story penned by Thomas. In 1970, UPI appointed Helen Thomas as the first female White House Correspondent. With ever growing prominence, Helen Thomas went on to cover President Nixon’s groundbreaking trip to China in 1972, and in 1974, became UPI’s White House Bureau chief.

Helen Thomas became such a fixture in the White House that she was the sole journalist given a seat in the White House Briefing Room. The remaining were circulated between media outlets. During this time she also coined her famous sign off “Thank you Mr. President,” which ended every presidential news conference for generations.

In 2000, Helen Thomas resigned from UPI the day after the firm was acquiesced by News World Communications Inc., which was founded by the leader of Unification Church, Rev. Sun Myung Moon. She went on to write as a columnist for Hearst Newspapers. As a reporter, Thomas held unrelenting veneration for balanced, and unbiased journalism, but with the freedom of a columnist her beliefs could permeate her work. At MIT she said “I censored myself for 50 years when I was a reporter. Now I wake up and ask myself, ‘Who do I hate today?”

From then on, she was an ardent critic of the executive branch.  During the Bush administration she was relegated to the back of the press room, and not called on for three years after telling a reporter that she was “covering the worst president in American history.” Blatantly critical of the invasion of Iraq, Thomas also criticized the press in her 2006 book Watchdogs of Democracy?: The Waning Washington Press Corps and How It Has Failed the Public. Her frustration with the lack of transparency and public discourse on the kind of democracy that we could be, continued into the Obama administration, particularly in regards to their policies of controlling the media. On August 4, a few weeks after her criticisms, however, President Obama and Helen Thomas celebrated their birthdays together in the press room. 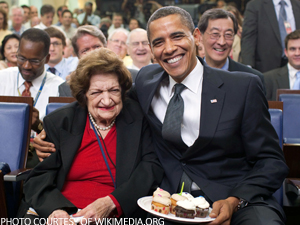 On May 27, 2010 Helen Thomas was asked by a Rabbi at the White House her thoughts on Israel, to which she replied that the Jews should “get the hell out of Palestine” and “go back home to Poland, Germany, America and everywhere else.” An unfortunate media frenzy ensued soon after, resulting in Thomas’s resignation. It is tragic that offhand comments, which do not reflect bigotry or Antisemitism (considering the irony that, from Lebanese heritage, Helen Thomas herself is a Semite),  tarnished her legendary reputation, and were amplified by the media that Helen Thomas helped develop.  If anything, her crucifixion by the press indicates that we have become incapable of having a frank conversation about global affairs, and our leaders are now confined to speak sound bites and pre-composed rhetoric rather than honest opinions and truth.

For 70 years Helen Thomas served the American public as an integral cog in our Democratic structure. She embraced her civic duty to inform the electorate, intrepidly pursued the truth, and rebuked any leader who tried to feed the media a lie. Thomas’s passing is a loss to the American people, but she laid the foundation for a journalism that does not marginalize women, and a journalism that holds its leaders accountable. Thomas was of the belief that “You’re only as good as your last story,” but as her legacy remains, and a new generation of journalists and media activists continue her mission, Helen Thomas’s story is still being written.