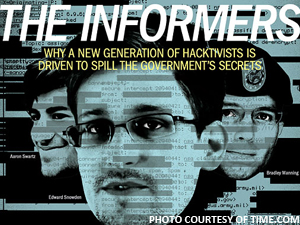 Cyber warfare has been a topic of major defense discussions since 2010, when the Pentagon set up its new U.S. Cyber Command (USCYBERCOM), headed by General Keith B. Alexander, director of the National Security Agency (NSA). USCYBERCOM was created to defend American military networks and attack other countries’ systems. In an age where cyber attacks are considered a bigger threat than terrorism, the government needs to keep its secrets private.

In May 2010 in Iraq, Army Pfc. Bradley Manning was arrested for passing classified material to the website WikiLeaks. Manning leaked detailed logs from the wars in Iraq and Afghanistan and a video of an Apache gunship killing civilians in Baghdad. He believed Americans had a right to know the ‘true cost of war.’ The information provided in those logs and videos exposed 20,000 deaths, including those of thousands of children, according to WikiLeaks founder Julian Assange.

Manning was charged with 22 offenses, including communicating national defense information to an unauthorized source and aiding the enemy. In February 2013, Manning pleaded guilty to 10 of the 22 offenses, but has denied the charge of “aiding the enemy,” which could result in a sentence of life in military prison.

In the past three years, the media and the American people have portrayed Bradley Manning as a hero. Some even attribute Manning’s leaks to sparking the 2010 Arab Spring.  Manning’s classified information exposed the atrocities of the wars in Afghanistan and Iraq, and hopefully prevented other war crimes committed by both the U.S. and other forces. Manning’s intentions were arguably good, and he was unaware of any detrimental effects his leaks might have procured. On the other hand, recent leaker Edward Snowden’s intentions are questionable.

Edward Snowden was a US former technical contractor for the NSA and Central Intelligence Agency (CIA) employee. He revealed information about a variety of classified intelligence programs, including US and European telephone metadata and the PRISM and Tempora Internet surveillance programs. In June 2013, Snowden was charged with theft of government property, unauthorized communication of national defense information, and willful communication of classified intelligence to an unauthorized person.

Currently, Edward Snowden is in Russia waiting to be granted asylum in several countries around the world, in an attempt to escape U.S. persecution. President Barack Obama has prevented Snowden from receiving asylum by revoking Snowden’s U.S. passport and threatening to alter trade relationships with countries seeking to help Snowden.

Opinions amongst the media and Americans are divided over Snowden’s actions. While some may view him as a hero for notifying the public of the NSA’s surveillance programs, others view him as a traitor.  Some believe his actions were heroic because he informed the American people about programs that violated their privacy. However, people like Rep. Michele Bachmann (R-Minn.) is among many lawmakers calling Snowden a traitor for jeopardizing the American people by leaking information that could aide the enemy.

After the leak, Snowden attempted to seek asylum in China. This move has made many people question Snowden’s political agenda and his true motives for the leak. Verizon’s 2013 Data Breach Investigations Report showed that 92% of security breaches in 2012 were perpetrated by outsiders. Furthermore, China’s attempts to steal IP (intellectual property) comprised of about one-fifth of all breeches in this data set. So why would Snowden seek asylum with America’s enemy? The exchange of information from Snowden to China, or any other political actor, could further jeopardize the privacy of the American people.

Manning is on trial this month, sitting on the fence between life in military prison and 20 years, while Edward Snowden is globetrotting the world, seeking asylum from U.S. persecution. Both men exposed information that challenged Big Brother. However, the intentions of the leakers differed and this difference is what defines their status as a hero or a foe.