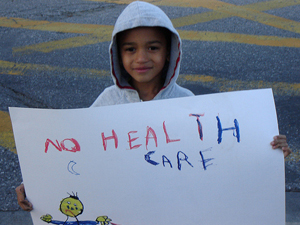 The future direction of Comprehensive Immigration Reform (CIR) is unlikely to benefit the 11 million people who live in the United States without access to healthcare. Despite the dual track approach taken by Congress, neither the House nor Senate has been able to provide a bill that would grant undocumented immigrants a means of accessing federal healthcare services.

The House Judiciary Committee, which has spent four years laboring over immigration reform, has decided to strike healthcare availability as an option after push back from the GOP. In addition, mixed signals from Speaker John Boehner (R-Ohio) have heightened tensions surrounding the lack of a bill in the House in the face of a looming August recess.

In the Senate, the battle to pass the bill came to a close with a bipartisan 68-32 vote. Notably, the Senate’s version of the bill failed to make any progress on immigrant healthcare despite over 300 amendments which were considered.

Included were amendments aimed at derailing both the Affordable Care Act (ACA) and comprehensive immigration reform by denying health benefits to undocumented immigrants for two additional years after they become eligible to obtain citizenship under the legislation.

The fear in Congress surrounding immigrant access to healthcare has been compared to what occurred during the drafting of the ACA, in which Congressional Democrats chose to not pursue the subject for fear it would sink the bill.

A similar narrative is developing as moderates and left leaning democrats are tip toeing away from the issue after pressure from Republicans who have indicated that the issue is a non-starter.  House Republican Raul Labrador of Idaho went so far as to drop out of negotiations with influential members in the House after debate over the issue, stating that, “aliens would have to pay for their own healthcare”.

Local governments in Illinois and California have attempted to move in the opposite direction, citing federal inaction as a burdensome cost to local governments with large immigrant populations. In Illinois alone, over 260,000 eligible immigrants may not apply for government subsidized health care services due to uncertainty regarding their legal status and fear of backlash.

Though members of the Democratic Party and advocacy groups have long indicated that the healthcare for undocumented immigrants presents a public health concern, their voices have been sidelined as Congress ignores the issue. In addition, economic concerns over immigration reform have halted progress even in the face of statements by U.S. Treasury Secretary Jack Lew, indicating that reform would allow for Social Security and Medicare to remain solvent by bringing in “hundreds of billions of dollars” in tax revenue.

Senate Republicans went so far as to introduce punitive measures, such as the Rubio-Hatch amendments, which would have force those applying for U.S. residency to pay federal income taxes and penalties during their time in the United States – a task the IRS indicated they wouldn’t be able to handle.

Efforts by a brazen GOP have compounded the problem of weak leadership in the Democratic Party to resolve an injustice that affects the entire nation.  Eleven million undocumented immigrants live in this country without access to healthcare, the children of those families are twice as likely as children with U.S.-born parents not to be covered by health insurance, and our nation’s economy suffers when workers are kept in the shadows while vulnerable to sickness.

Supporters of the Affordable Care Act, and Americans worried about their healthcare premiums have much at stake here as well. As Kathy Ko Chin, President of the Asian & Pacific Islander American Health Forum recently indicated, when immigrants do not have access to health services, then that risk factor and the cost of emergency services, estimated to be 2 billion annually, increase the price and availability of healthcare for everyone.

The uninsured not only suffer from the stress of not having healthcare but also present a fiscal cost to the United States at $65-130 billion annually.

The Cost of Compromise

It is a moral necessity for Congress to change its laws regarding immigrant healthcare. The disastrous cost of compromise on the part of Democrats is a cost too great to shoulder as our immigrant population grows. Historically, the last time Democrats stood against immigrants on healthcare was when the Clinton Administration passed the Personal Responsibility and Work Opportunity Reconciliation Act of 1996 (PRWORA).

While some states have sought to maintain strong social safety nets for their populations, immigrant enrollment in programs such as Medicaid and TANF (Temporary Assistance for Needy Families) have diminished.

Federal law has caused a chilling effect whereby even those who are eligible fear federal backlash, stigmatization, or do not believe they can get health services at all.

President Obama Delays Review on Deportations Until the End of Summer

President Obama Delays Review on Deportations Until the End of Summer