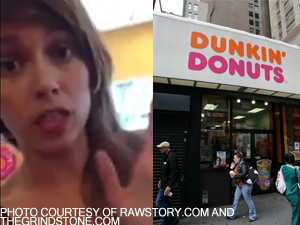 Less than a month ago, two Dunkin’ Donuts employees in Fort Lauderdale endured a customer’s racist rant after the customer claimed they did not honor the company policy of providing a free meal when she did not receive a receipt. The customer videotaped herself spewing profanities while demanding one employee to provide her with the free meals and calling the other, who had apparently wronged her, a “little f—– sand n—–.” “You think you all are tough big fat Arabs bombing the Trade Center? I’ll show you tough,” spewed the Florida woman, later identified as Taylor Chapman, a 27-year-old graduate of Nova Southeastern University in Orlando. Abid Adar, an 18-year-old recent high school graduate, and his coworker Nithi fulfilled the hostile customer’s request even amongst a flurry of insults and obscenities.

After the video went viral and internet backlash ensued, company spokesperson Jessica Gioglio said Dunkin’ Donuts was proud of the employees’ calm demeanor. “We are aware of the video and the situation that occurred at the Dunkin’ Donuts restaurant located in Fort Lauderdale,” Gioglio said. “We commend the franchise’s crew member for handling this difficult situation with grace and patience. We believe this is a powerful example of great customer service and the respect our crew members have for our guests.”

While Dunkin’s Donuts has since announced on Twitter that the franchise owner would recognize employees for their “unwavering professionalism,” it is important to note that the chain commended the employees for tolerating abuse.  In an industry where employees are paid as little as $7.20 an hour, it’s difficult to imagine that Dunkin Donuts expects their employees to accept harassment as part of “great customer service”. Those who have worked in restaurants, retail stores and other service industries are well aware of the emphasis on customer satisfaction, but not all are conscious of how unwavering customer service affects employees of color.

This infamous video is evidence of how customers who are displeased with performance will sometimes resort to disparaging employees and calling them racial slurs. While it might seem like a rarity, my experiences working in retail demonstrate that it is more common them people think. Once I defended a fellow employee when she was mocked by a customer because of her accent. Much like the customer in the video declaring she graduated with a business degree, many unhappy customers would tell me that they were doctors, lawyers, etc., and that was why they knew the store’s policy better than myself. Another coworker was called a four-letter misogynist slur when she declined to return their product. When she began to cry, my manager came in her defense, but many times my coworkers either did not wish to report their mistreatment or the manager would side with the customer in order to gain the sale.

Whether the customer chooses to focus on the employee’s race, religion, or class, it is problematic when employees are expected to endure this abuse while working in service industries. Enduring this sort of aggression can be psychologically damaging. Not only is this a job hazard,  it is simply unacceptable, especially when employees’ industries are paid minimum wage. Many employees may feel like they cannot stand up for themselves because company policy praises “customer satisfaction,” consequently, rejection of these principles may result in a write-up or termination.

Rather than emphasizing how this incident exemplifies their employee’s great customer service, Dunkin’ Donuts and the like should adopt a “no-tolerance policy.” In the event that unhappy customers belittle employees, they should be encouraged to alert a supervisor so that they no longer have to serve that customer. Otherwise, customers will learn that this behavior is accepted in these industries, and whenever they are angry they know they can take out their frustrations on a lowly cashier.

The same companies that would proudly claim they are an “equal opportunity employer” fail to acknowledge that this label should apply to all facets of the workplace. While Dunkin’ Donuts may allow people of all ethnicities, races, and religions to work for their company, it means nothing when that workplace is hostile. Most corporations’ main interests lie in maximizing profit, no matter what that costs their employees in terms of psychological or emotional distress. Regardless of whether the abuse is coming from their supervisors or their customers, it is still abuse and it should never be tolerated.