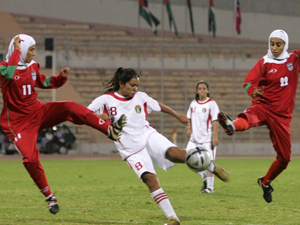 As a resident of the north side of Chicago’s sports-infused “Wrigleyville” neighborhood, I was one of the first to become aware of the Blackhawks’ victory over the Boston Bruins. They won Game 6 in a stunning fashion, scoring two goals in 17 seconds to bring the Stanley cup back home to Chicago.  Sleep was out of the question, as the noise level was on an all time high on the streets with chants, fireworks and sirens.

The Blackhawks are a team made up of some very skilled players at every position.  However, the stat that usually remains in the background when a team wins is racial demographics.

The Blackhawks have a few players who are biracial, adding a little color to the mix of prominently Caucasian players.  These players include: Goaltender Ray Emery, who is half Canadian and half African; Defenseman Johnny Oduya, who is half Swedish and half Kenyan; Forward Jamal Mayers, who is half Canadian and half African; and Forward Brandon Saad, recognized as the first Syrian American to win the Stanley Cup.  These four players are dwarfed in the locker room as not only the racial minorities on the team, but in hockey as a whole.

According to the Chicago Tribune and the National Hockey League (NHL), “there are 44 minority players on the rosters of the league’s 30 teams. Of those, 22 are black, 11 identify as Native/Aboriginal, four are Hispanic, three are Asian, two are West Asian/Arab, one is Inuit and one is South Asian/Indian.” This data illustrates the lack of diversity in hockey, especially for those who identify as Asians.

When considering hockey’s history, the racial makeup of the Blackhawks is not shocking.

Hockey’s first formal game was played in Ontario in 1855.  It then started to spread in Canada and caught popularity at McGill University, where the NHL further developed the “McGill Rules”, which still govern the game today. The first national association was also formed in Canada in 1885. Hockey then spread to its southern neighbor where teams competed in the New York area in 1899. The first professional league established was called the National Hockey Association, formed in 1909. When it became the new National Hockey League (NHL) in 1917, the original teams from Canada and the prior league were still in play.

From this brief history of how the NHL and hockey came to America, it is an obvious and logical inference that Canada played a major role in the sport from the start. Canada still has many teams within the NHL, and Canadians also make up the majority of players that play the sport professionally.

Hockey is practically a religion in Canada; it is one of the things that Canadians view as their own creation.

Now imagine if you were a non-Canadian athlete of a different race who migrated to Canada and were immersed into this hockey-loving culture. This is what happens to many Punjabi Sikhs who migrate to Canada.. In this situation, one might be either forced to play through school or stand on the sidelines with desires to play this prominently Caucasian sport.

In reality, however, an immigrant of color is often pushed aside and not given an opportunity to perform. This opportunity may be taken away due to Sikhs’ strict traditional family values, or their turbans.

This instance of immigrants being denied the opportunity to play hockey in Canada is portrayed in the 2011 comedy film “Breakaway.” Even though this film is a comedy, the issue should not be taken lightly.

“Breakaway” sports a cast of stars including comedian Russell Peters and music artist Ludacris. The movie illustrates the struggles of a hockey-loving Sikh boy, Rajvinder, who goes to many lengths to become involved in the primarily Caucasian sport. In order to assimilate, he does the unthinkable in the Sikh tradition. First he trims his hair, then he discards his turban and abandons his education. While his father wants him to take up the family business and respect the Sikh religion for its values, Rajvinder develops his own methods of achieving his personal goals.

The movie illustrates the racial discrimination Rajvinder faces from the mainstream Caucasian players. Not only do the other players ridicule him, but his own friends also tease him and ask him to take up traditional Indian sports, ‘Guli Danda’ and ‘Kabaddi.’

Rajvinder continues to persevere, and attempts to make a team called ‘Speedy Singhs’; the coach can’t pronounce the players’ names and assumes they are a part of the same family since they have the same name.  The Caucasian players and coaches also continuously discriminate against the Sikhs in the film for the way they look, especially for the turbans they wear.

“Breakaway” shed light on the prevalence of racial discrimination regarding headwear in sports today. Although this was just a movie, this type of racial profiling and societal ignorance occurs everywhere. Not only does discrimination against cultural and religious headgear occur with Sikhs who wear turbans, but also with Muslim women who wear hijabs.

Consequently, racial profiling is documented not only in hockey but other sports as well.

In 2007, Fédération Internationale de Football Association (FIFA) banned hijabs from the sport. In July 2012, FIFA reconsidered their original ban and finally lifted the ban in November 2012 after approving a prototype of a hijab by Montreal designer Ilham Sayyed.

After years of waiting, hijabi soccer player Shireen Ahmed received an email on April 11, 2013 regarding the first FIFA-approved hijab. The hijab costs $60 and is offered in several colors while also being approved by the International Football Association Board (IFAB). The approved hijab is a big step for female Muslim athletes who choose to observe religious practices while also playing for national sports teams.

Not only is the sports world making changes and room for headscarves, but the inclusion of turbans is being considered as well. As mentioned in a recent New York Times article, the Canadian Soccer Association suspended the Quebec Soccer Federation (Q.S.F.) as they failed to follow a national directive allowing turbans to be worn while playing the sport.

The provision was applied in all of Canada, except in Quebec. The Q.S.F. banned the headgear , claiming it presented a safety issue.

In the same article, Brigitte Frot, the director general of the Q.S.F. was quoted saying, “They can play in their backyard, but not with official referees, not in the official rules of soccer. They have no choice.”

Many players, including Aneel Samra, 18, were insulted by what Frot said, and as a result, did not register to play this year.

The Canadian Soccer Federation wants to move toward a decision of acceptance and model after other countries such as the United States, which allow players to wear religious head coverings, including turbans.

Even though these changes are being noticed and celebrated, we must understand that there is still work to be done. Canada has taken steps against Quebec for its refusal to lift its ban on turbans in soccer. Hopefully in the near future, Quebec can realize they are alone in this conservative thinking and join the remaining sports world in the practice of accepting diversity.

“When Politics and Futbol Collide”