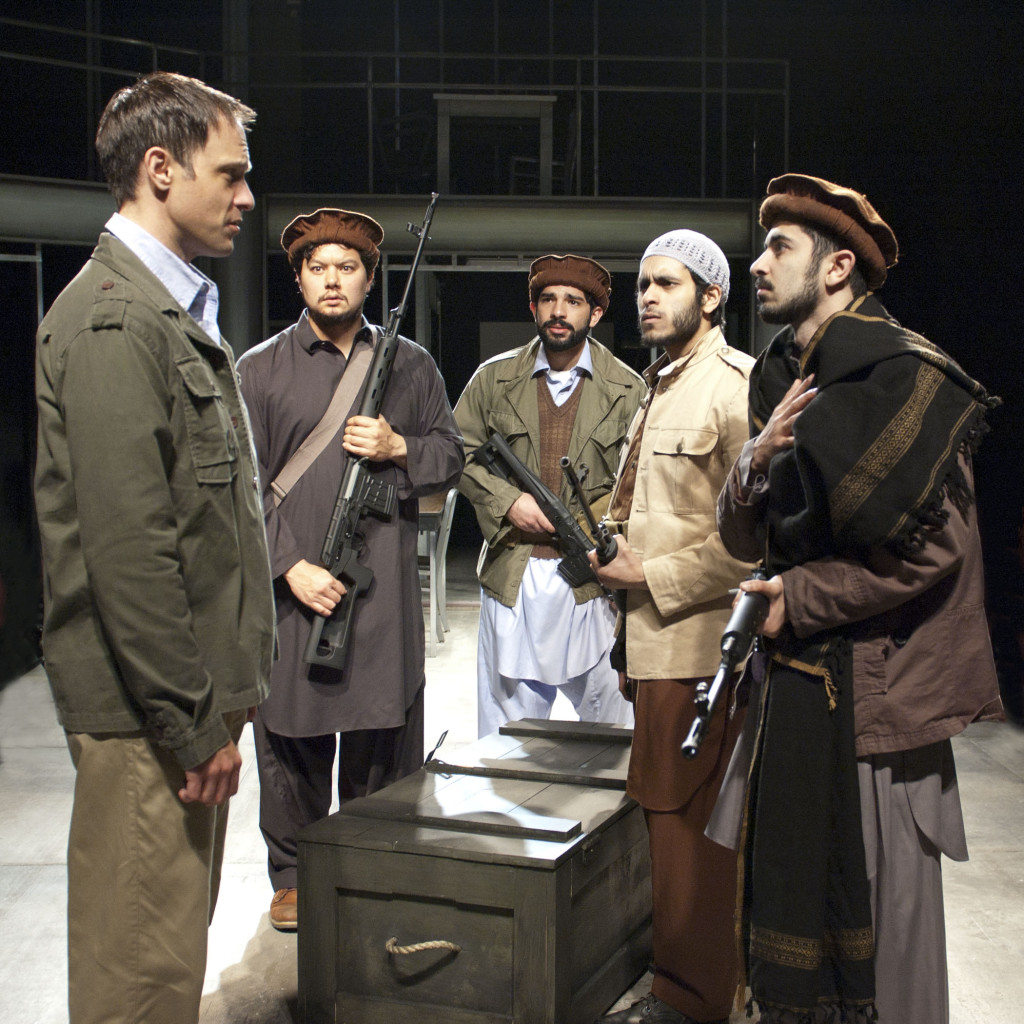 When entering Timeline, patrons instantly feel immersed in a world of history and theatricality. In their current production, Blood and Gifts, the audience must climb through metal scaffolding to reach their seats. The walls are adorned with maps of Afghanistan, biographies and portraits of figures like Gulbuddin Hekmatyar and William Casey, and historical synopses of the Cold War. Furthermore, the performance transpires on the floor, encircled by the audience, enabling viewers to feel like a fly on the wall, a historical witness, rather than confined to the traditional distinction between stage and spectator.

For 15 years, Timeline has provided Chicago theatregoers with “Stories inspired by history that connect with today’s social and political issues.” Although TimeLine’s mission is commendable, its current production of Blood and Gifts serves as an unsettling reminder that history is oft-written from a very particular perspective- a perspective that reflects the mythologies produced by those in power.

The play centers on CIA operative James Warnock (Timothy Edward Kane) stationed in Pakistan to conduct a series of closed-door deals to provide arms to the Afghans resisting Soviet occupation. Over ten years, he forges relationships with an MI6 agent, and a KGB agent operative over their distances from their respective homelands. He also conducts missions with ISI, and befriends two Afghan militants that become Islamist extremists in the play’s final act of betrayal. Warnock’s aggrandized role as the American arbiter of justice eventually results in Soviet retreat.

Throughout the play, the Afghani and Pakistani characters serve primarily as the backdrop to Warnock and his white colleagues from British MI6 and the Russian KGB. While the image of Muslims throughout the play is varied based on their level of religiosity, the closing scene, in which Warnock is surrounded by Afghan militants arms raised with weapons in hand, chanting “Allahu Akbar!” leaves audiences with a simplistic view of Islam and reifies the dangerous association between Islam and violence.

Up until that point, the Muslim characters are not portrayed as holistically bad. In fact, the main Afghani character and leader of the secular anti-Soviet revolutionaries, Abdullah (Kareem Bandealy) is depicted throughout the play as a friendly and reasonable, albeit culturally traditional, man. In the last scene, however, Abdullah turns to Islam to rectify the loss of his son; he turns to Islam and suddenly becomes wholly unreasonable, unifying with a vicious, former enemy whose brand of Islam justifies acid attacks against women and the killing of ‘infidels.’ This scene had the potential to demonstrate to Western audiences the desperation and sadness that leads a person to extremism and self-serving violence; it had the powerful potential to humanize an enemy that Americans commonly demonize. Instead, it merely inspired shock and disappointment at Abdullah and sympathy for the naive, well-meaning American Jim.

In fact, the entire book is written in a manner that evokes emotion on behalf of the white, Western protagonists aiding war-torn countries, rather than the actual casualties of the war. Warnock, along with Simon (Raymond Fox), the MI6 agent, frequently commiserate about atrocities perpetrated by the Russians, expounding on their humanitarian obligation to liberate the people of Afghanistan from the Russian bear. Reminiscent of the white man’s burden, but now on the premise of an east-west conflict, the audience is inclined to lament the civil servants who sacrifice western luxuries and families in order to aide a foreign nation.  Even in that final scene, after the military leader Abdullah has revealed to Jim that his son has been killed, pity is not directed towards the grieving father or even the dead boy, but to Jim, who has been deceived after years of service, which may have all been in vain since those still standing have turned to militant Islam.

Despite this, the play had some redeeming qualities. For example, the young Afghan soldiers’ infatuation with American music amidst the terrors of war and Russian occupation evokes a sensation bordering between empathy and pity. The audience is reminded of their youth and immaturity in a cute and humorous way. Audience members, however, must take it upon themselves to extrapolate from these scenes the underlying tragedy of these young boys’ situation; the text in itself does not illicit empathy.

In another scene, Jim helps Abdullah and Saeed lobby a southern Christian congressman for US financial support, framing the appeal around their shared religiosity. In this context, Christians and Muslims relate to one another as people of the Abrahamic traditions fighting against the atheism of the Soviets.  However, even in that thought-provoking moment, the author gaffed by comparing the Prophet Mohammed (PBUH) to Jesus Christ, an inaccurate representation of Islam as Muslims do not consider the prophet to be God.

The problem with Blood and Gifts is that it appears rooted in fact more than fiction, and thus it dupes the audience into feeling culturally and historically savvy by the end of the performance. In fact, after the show, a group of women in the front row immediately began animatedly admiring the play for all that it taught them: “20 years of history in two hours!” one woman exclaimed.

What this woman, and the vastly white upper-middle class audience surrounding her did not realize was that, while rooted in history, the play itself perpetuated harmful stereotypes about the nature of Islam. Instead of framing the story of extremism in the region as one in which Islam was manipulated and abused to further political and cultural agendas, the play depicts Islam as the catalyst that incites violence. Furthermore, it proffers a story of the CIA as a naïve, but well-meaning force, in political history in order to victimize only the white, American protagonist.

Ultimately, the play serves as a reminder that, as Mark Twain put it, “The very ink with which all history is written is merely fluid prejudice.”