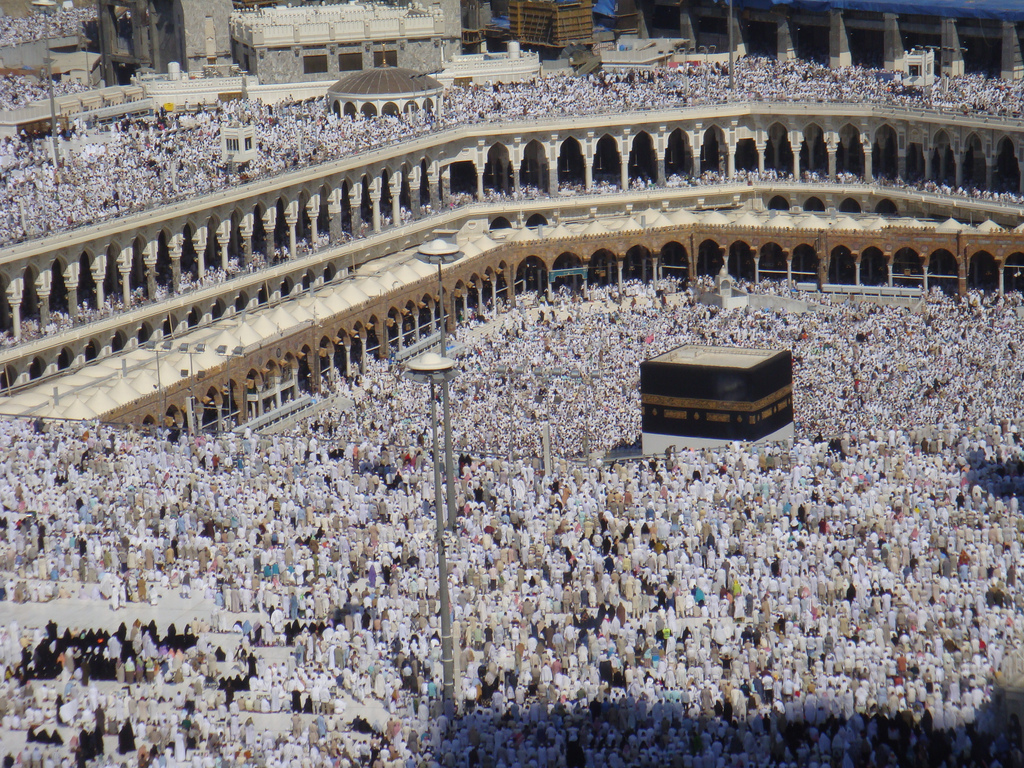 The Hajj is an annual pilgrimage to Mecca, Saudi Arabia. It is one of the five obligatory pillars of the Islamic faith and must be carried out once in a lifetime by every Muslim who has the physical and financial ability to do so. The number of people who attend the Hajj has increased exponentially with the passage of time. Last year, nearly 3 million Muslims performed the Hajj.

Muslims have been performing this pilgrimage for over 1,400 years. During this pilgrimage, Muslims reenact the physical and spiritual journey undertaken by Abraham and later by the Prophet Muhammad. Pilgrims circumambulate the Kaaba seven times, drink water from the Well of Zamzam, run back and forth between the hills of Safa and Marwa seven times, and throw pebbles at three pillars signifying the devil.

All male pilgrims wear the Ihram, which consists of two pieces of unstitched, white cloth, while performing the rituals. Women can wear whatever they wish as long as they adhere to Islamic principles, and cover their heads as a sign of respect; their faces and hands remain uncovered.

This specific ritual symbolizes that, regardless of race, ethnicity, wealth, or socio-economic status, everyone is equal in the eyes of God. Furthermore, Muslims are reminded that on the Day of Judgment, they will be judged based on their good and bad deeds; their worldly status and possessions are meaningless in the evaluation. It is a time for self-reflection and betterment. Simplicity, patience, and humility are the characteristics that every pilgrim should exhibit.

These values, however, starkly contrast the commercialism that has overtaken the region. How can we claim that everyone is equal in the eyes of God when we offer some pilgrims luxuries that others simply cannot afford? Some pilgrims may be able to afford traveling to Saudi Arabia, but then have to sleep in the Masjid Al-Haram for the remainder of their journey instead of a hotel. Others live in locally owned hotels surrounding the mosque. These hotels offer a room and a shower (sometimes even a shared bath amongst rooms), but are far from luxurious. They are just a place to rest along the journey.

These vastly different experiences begs the question: Are these pilgrims really equal – in socioeconomic status and lifestyle – to the pilgrims that are living in luxurious, state of the art hotels with dozens of amenities available to them? Will the people living in this type of luxury even gain the virtue associated with the experience of the Hajj? With luxury hotels taking over the once locally developed landscape and offering rooms to pilgrims, this is a question that we need to ask ourselves before deciding where we will stay during our pilgrimage.

According to the Daily Star, spending on the development of Mecca and Medina, the two major cities in the region, is valued at $120 billion over the next decade. In Mecca,the Abraj Al-Bait Towers, completed in 2012, are enormous in comparison to the Masjid Al-Haram (Arabic for “the Sacred Sanctuary”), which is the mosque built around the sacred Kaaba. Muslims believe the Kaaba was originally built by the Prophet Abraham and his son Ishmael, and is among of Islam’s holiest sites.

These towers now overshadow the grandeur of this structure. They are home to an elite shopping center as well as hundreds of luxury hotel rooms. Hopefully, Muslims will still have a feeling of awe when they see the Kaaba for the first time, even though they see it in the context of these opulent modern day wonders.

The Gulf Institute estimates that 95 percent of millennium old buildings in Mecca have been torn down to accommodate the newer structures.  Some of the many sites that have been destroyed in the last 20 years include the house of the Prophet Muhammad’s first wife Khadijah, several mosques marking the Battle of the Trench, the mosque linked to the Prophet’s grandson, and the Ajyad Fortress.

The Saudis insist that expansions are necessary to accommodate the growing number of pilgrims in a rapidly expanding, inter-connected world.  Many proponents even argue that if pilgrims can afford these luxuries, they should be available for purchase.  Islam, however, stresses simplicity and rejects grandeur. The Prophet Mohammed (peace and blessings upon him) was renowned for living humbly, sleeping on the floor, and only owning one set of clothes. He also stressed giving charity regularly and being exceedingly kind to orphans and the disadvantaged. Are those Muslims who indulge in sumptuous living at the holiest of places like the Haram forgetting the Prophet’s example and depreciating the purpose of Hajj itself? The debate continues, but so does the construction.