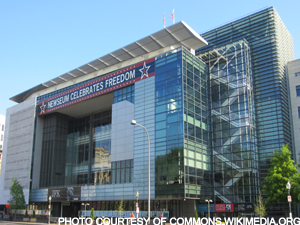 The panelists debated at length whether this media frenzy was a justified step in protecting Americans’ privacy or presented a threat to national security.  Yet for a program that sought to provide an alternative to the “sound-bite constitutional analysis” of the past weeks’ news coverage, serious consequences of the reports were never discussed.

By focusing on the same questions posed by the media (e.g., how do we strike a balance between Americans’ civil liberties and security from terrorist threats?), panelists altogether sidestepped questions that many reporters assume don’t need to be asked.  Who counts as an American?  What is terrorism?  And how do we define a threat?

Laurel Bellow of the American Bar Association (ABA) remarked that “the existence of PRISM, and the vastness of its scope, came as a surprise to mainstream America.”  As antiracist activist Tim Wise points out, the disclosures are most shocking to those who never expected to be the target of government surveillance.  Is this violation of civil liberties so very different from stop-and-frisk practices in New York, anti-immigrant legislation such as the state Senate Bill 1070 in Arizona, or the NYPD’s Muslim surveillance program?  Perhaps the actual reason for the media frenzy is the notion that the communications of white, middle- to upper-class, Christian, documented Americans are also being swept up into the NSA database.

I am white, male, middle-class, Christian and a “documented” U.S.-born citizen.  When Robert Litt from the Office of the Director of National Intelligence assured the audience, “If you want to find a needle in a haystack, you need to have the haystack, especially in the case of a terrorism-related emergency,” it first struck me as merely comical.  Would I be reacting the same way if my various privileged identities did not make me extremely unlikely to be profiled as a suspect in a “terrorism-related emergency?”

Following the Boston Marathon bombings, Senator Claire McCaskill of Missouri asked Homeland Security Secretary Janet Napolitano why the bombings were immediately labelled acts of terrorism, but last year’s school shooting in Newtown, Connecticut were not: “Why aren’t we calling the man with the high-capacity assault weapon and the high-capacity magazine — why aren’t we calling him a terrorist?”  Secretary Napolitano hesitated before citing “methodology…effect and impact.” President Obama, however, has declared that “any time bombs are used to target innocent civilians, it’s an act of terror,” and the U.S. Code legally defines terrorism as “premeditated, politically motivated violence perpetrated against noncombatant targets by subnational groups or clandestine agents.”

The actions of Dzhokhar and Tamerlan Tsarnaev are considered “politically motivated,” and thus terroristic, because they were motivated by extremist Islamist beliefs and information from an al-Qaeda run website.  Adam Lanza owned a National Rifle Association certificate, an NRA guidebook on the basics of pistol shooting, and collected material on previous mass shootings. These included news articles about Norwegian mass murderer Anders Breivik, who frequented fundamentalist Christian websites and closely followed anti-Muslim bloggers in the United States.  However, a law enforcement official told NBC News that “there was no indication that it played a role in the school massacre,” and the NRA called for more arms in schools the week after the massacre but denied any affiliation with Lanza.  Those trying to make sense of his actions typically cite mental illness and social isolation, though very few have considered the similar alienation experienced by Tamerlan Tsarnaev.

Even if Adam Lanza fit the legal definition of terrorist, because he is white, from a Christian background, and a U.S.-born citizen, the Department of Homeland Security would be very unlikely to target him.  DHS’s 2009 report on “Right-wing Extremism” drew widespread criticism from Republican lawmakers for its alleged attack on conservative ideologies. Following the outcry, personnel and work dedicated to homegrown extremism were drastically cut.  Only one analyst in the department’s Office of Intelligence and Analysis currently focuses on domestic terrorism unrelated to Islam, even after a study found that such terrorist plots are the majority.

We should not be debating whether Adam Lanza is a terrorist, but talking about how media presentation of mass violence is shaped by an exclusive and unspoken understanding of who is “American.”  Not only is Homeland Security unlikely to investigate threats of politically-motivated violence from within white, Christian “mainstream America,” but we are unlikely to have even heard about the people behind these plots, even if they are the majority.

Terrorism gradually becomes defined in relation to “mainstream America:” terrorism is mass violence committed by those who do not fit this profile – white, Christian, U.S.-born citizen – against those who do.  When those who do fit this profile commit mass violence, with any luck the media can disqualify them on mental health grounds.  And when mass violence hits communities outside this profile, we hardly hear about it.  Remember the widespread news coverage of the shooting at the Mother’s Day parade in New Orleans – the third shooting at holiday festivities in New Orleans this year – and of the June shooting at Santa Monica College, where over 80% of the student body are people of color? Neither do I.

This popular image of America has real and unacceptable consequences – consequences which I will never have to worry about because my various privileged identities erase any doubt that I fit into this “America.”  If law enforcement has not identified the suspect in a “terrorism-related emergency,” I know that the New York Post will not identify me as the suspect when I am questioned as a witness.  If I turn on CNN, I will not see a news ticker reading “Police looking for light-skinned or white male.” News contributors will not be tweeting “Kill All Christians,” and lawmakers will not call for increased surveillance of the entire Christian community. I will not be escorted off my plane for speaking in my native language, or assaulted when I leave a restaurant or my house. If they finally identify someone different from me, no news anchor will say the suspect is “not a white Christian.”  And if it is revealed that the NSA is keeping records on the communications of millions of Americans, I can rest assured that, even if I am in “the haystack,” I will never be mistaken for the needle that they are trying to find.

Media Must Shed Its Anti-Islam Bias

Did We Learn Anything From the Chapel Hill Shootings?