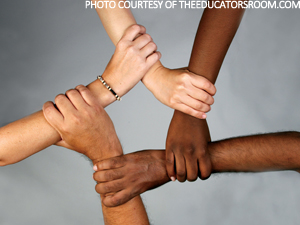 “You’re an ABCD,” a desi (South Asian) friend in grade school exclaimed to my bewildered 12-year-old self as we sat on the cement benches during recess one day.

I looked at her like she was speaking another language. Maybe the ponytail on her head was too tight, I thought. “A what?” I asked.

“An ABCD – you know, an American-born confused desi.”

She proceed to explain to me how although I had South Asian roots, my inability to speak Urdu properly and my growing distance between other South Asian students made me a white-washed desi.

At that age, I didn’t understand what the big deal was or why I had to be categorized as an ‘ABCD.’

That was until I was introduced to a ‘FOB,’ someone who was fresh off the boat from the motherland – oil in hair, dressed in desi clothes, topped off with an accent and the stench of curry. Being an ABCD didn’t seem so bad after all.

It was only until I got older when I realized how unfairly these terms defined us. Sure, my mom was neither pleased with my struggles to properly communicate with aunties –older women in our community – nor happy at the fact that my younger brother understood numbers and time in Urdu more than I did. But, I was definitely down to blast some Hindi and Punjabi music, watch old 90s Bollywood films and devour my mom’s desi dishes just as much as the next ‘FOB’ from the motherland.

When I started college, I realized I wasn’t alone in struggling with communicating in my so-called ‘mother tongue.’ I encountered a few other desi, and even, Hispanic friends who felt like they didn’t fit in with their communities because of their inability to converse in their respective languages.

Karyna Rodriguez, a student at the University of Illinois at Urbana-Champaign shared her sentiments with me. She was born in Chicago and spent most of her time with her Spanish-speaking grandparents until her mother moved her out to Darien, Illinois after getting engaged to a Jewish man. Rodriguez grew up in a mostly white neighborhood and her father, who she visited on the weekends, was also in a relationship with a white woman. Consequently, Rodriguez didn’t feel the need to put her Spanish to use, and as a result lost her Spanish-speaking skills.

“When you’re Mexican, people are like “You’re a Mexican, and you can’t speak Spanish? What kind of Mexican are you?” Rodriguez explained. “You’re kind of judged by that, and it’s like I’m not born knowing the language. You learn by what you’re surrounded by.”

The feeling of displacement within our communities doesn’t stop at the language barriers. With ‘hybrid’ identities, we fit neither here nor there; our ethnic communities judge our authenticity within them based on certain standards at the same time that we feel displaced from the general population because of our plurality of self-identities.

Chamara Moore, a student at Alcorn State University recounted a time in her childhood when people within the black community would tease her for having friends of different races than her own.

“I got called all sorts of names: oreo, wigga (white n****), blacker (black cracker),” Moore said. “I’ve had black people ask me if I know that I’m black…” The notion that certain personality traits, behaviors and speech patterns can be racially categorized seriously limits an individual’s potential and freedom. “I just hope that people become exposed to things that will enable them to grow culturally so that they will see that human beings are not all made in archetypes, stereotypes and labels. We are all complex within our respective ethnic backgrounds.”

Alicia Thomas, a student at DePaul University, certainly feels the complexity in her ethnic make-up and her sense of belonging. Thomas is a mix of white, black and Native American. She is often described as the “white girl” of her family due to her light complexion; however, she says she wouldn’t necessarily fit in with the white community and feels that she’s “stuck on a line.”

“Do I fit into one group completely? Not at all. I’m like a venn diagram with overlapping circles. I’ve always felt like an outsider,” Thomas said. “I personally feel that stereotypes, set perceptions, and closed mindedness [are] the reasons people have a hard time belonging. If you don’t meet a certain criteria, you don’t belong. I’ve been called not black because I don’t like watermelon, I didn’t try Ramen Noodles until I was a teenager, and I don’t have nappy hair. None of those things are purely black tendencies, but people’s ignorance that race can be defined by behavior and habits are what make people feel marginalized by their own race and others.”

With all these scenarios, the question that arises is, “why do we feel stuck?”

“I think the problem is not extremely uncommon among first and second generation kids in immigrant families,” Ivan Lopez, a high school classmate, pointed out on my Facebook status regarding the issue.

I didn’t realize it before, but it certainly seems that most first- and second-generation children in the United States feel out of place in comparison to our other ethnic and racial counterparts.

Like most things in life, our identities should not be fractured by imagined black and white divisions. We all have shades of grey in the mix. Sometimes we feel like we belong in one group and sometimes we don’t.

Perhaps we should come to the understanding that we should embrace each other’s differences instead of trying to divide and categorize one another into set groups, only to feel like those set parameters don’t clearly define who we are or where we come from.

“It’s a battle that will take the community,” Thomas surmised. “So many people are living in this comfort zone that this is just how things are. Unless we try to change perceptions and openly express that stereotypes don’t fit everyone they seek to group, people will stay in this bubble they’ve created…”

“The fact that people put an emphasis on our differences and don’t try to understand and embrace our similarities is what will keep people divided, both from their communities and within themselves.”

A Place for the Marginalized Artist