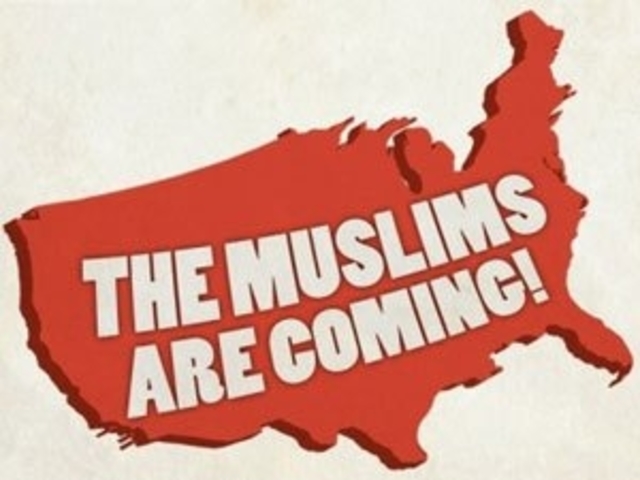 The Muslims are Coming!, directed by Dean Obeidallah and Negin Farsad, is part mockumentary, part adventure story. The movie provides a compelling portrait of a roguish group of Muslim comedians who bring their stand up show to venues across the Southern United States and the reactions they receive from audiences and interactions on the street.

The movie includes interviews with star comedic geniuses: Jon Stewart, David Cross, Janeane Garofalo, Aasif Mandvi and Lewis Black. The message is simple: Muslims are like you and me, they laugh and they cry and they can be pretty damn funny!

The movie has been targeted by the usual machinations of the Right-Wing Islamophobic echo chamber. Hate group leader Pamela Geller has led a swarm of vitriol, writing a hit piece against the movie (which she hasn’t seen) at Breitbart.com, describing it with the Orwellian phrase “Cultural Jihad.”

That Geller is threatened by artistic expression and Muslim comedians speaks not only to her humorless and perpetually terrified nature but also a deep insecurity based on the reality that she and her cohorts have been and continue to be rejected by mainstream society.

The movie may, in fact, be a personal Jihad for these comedians but it is not the type of “Jihad” that the likes of Geller rant about daily, oiling their well-funded hate churning conglomerates. It is very much in the spirit of the #MyJihad campaign; it is their personal struggle to hit the punch line right on time, to change minds and perceptions through dialogue and laughter.

Leading Muslim American journalist Sheila Musaji addresses the bigots: “Yes, Geller is right this is a jihad, in the sense that mainstream, traditional Muslims understand jihad — not in the sense that Islamophobes and the Muslim lunatic fringe distort the term.  It is a comedy jihad.  A jihad for truth, justice, and the American way.”

There isn’t a shadow of a doubt that the Islamophobia industry isn’t done attacking Dean and Negin’s movie. As more approving reviews come in and the movie achieves a greater audience, we will surely see Islamophobia heavyweight Fox News add its own two cents in line with the predictable pattern of anti-Muslim memes: 1.) blog posts (Atlasshrugs, JihadWatch) that travel to 2.) news aggregates/magazines (Breitbart, Washington Times) that then get carried by 3.) Fox News.

In the struggle to define the American way, The Muslims are Coming! stands in bold contrast to the merchants of fear and foreboding, it provides light through comedy, highlighting the better angels of our nature through a reflection that what we share in common trumps our differences.