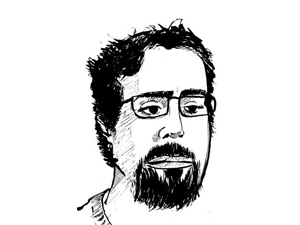 Chicago Monitor contributor Milos Markicevic interviewed Toufic El-Rassi about his 2008 graphic novel “Arab in America.” The semi-autobiographical book chronicles El-Rassi’s experiences in America as an Arab immigrant and an American Muslim after 9/11.

Read excerpts from the interview below or listen to the full unabridged recorded interview through our SoundCloud.

Was there a specific event that prompted you to write Arab in America? 9/11?

In the aftermath of the attacks there was this spontaneous racist attack on a mosques in Bridgeview. A couple of weeks later they had an open event at the mosque that a couple of friends and I went to. One speaker was a mother that spoke about how her children are embarrassed about who they are and how they want to hide their identity, how they’re being mocked in school, and how its affected them so deeply that they come home crying. It struck a chord with me because I could relate so much to that experience. Growing up me and my siblings had similar experiences… this is an issue that so many young people have and if I could share it in public then maybe I could find a way to highlight this issue so people can address it.

In your graphic novel you listed films that perpetuate negative American stereotypes. Do you think this trend has continued or have recent films become more sensitive about the portrayal of Arabs?

Generally speaking there is a little bit more sensitivity culturally about race and gender, at least rhetorically. But I still think that Hollywood and the media in general follow the path of least resistance. One of the things that happens that I think is real interesting is the line between fiction and real life has become so blurred. People talk about art imitating life and life imitating art. In Hollywood cinema you need the villain, when 9/11 happened Bin Laden filled that role perfectly… I think the media in general is about creating a narrative, creating a story. It’s less about what we would consider journalism… it’s more about sensationalism, getting ratings, tapping into people’s prejudice based on ignorance of the Middle East, especially exaggerating the differences…

There was a lot of controversy over Zero Dark Thirty’s inaccuracies when it was released. Did you see the movie?

I did, a movie like Zero Dark Thirty is exactly the kind of thing that they still do. It is full of inaccuracies but as I mentioned it has to be dramatized. Accuracy has sort of gone out the window, especially if you think about the lead up to the war in Iraq. If there was one thing learned from that it’s that what you say is not so much as important as how you say it, the whole weapons of mass destruction thing for example. That line between reality, propaganda, and fiction, its all been so blurred. It’s hard to break out of that. I don’t know what or how long it’s going to take but its still very much a problem in the media.

Going off media, do you think political pundits still have a big influence on Americans? A few years ago Glenn Beck lost his show on Fox News. Is this a positive sign that pundits are being slightly constrained from going off into extremes?

For every one positive development you can find another negative one. Like for example Michele Bachmann really being called out for insinuating Huma Abedin is somehow a part of the Muslim Brotherhood. Huma Abedin is a long time associate and worker for Hillary Clinton, someone who could potentially become president of the United States… Her being called out on that was a positive development. But at the same time there are still talking pundits that have enormous influence for just having a talk show… But for every bad person there’s a good person, someone like Amy Goodman from Democracy Now. However, it’s hard to definitively say if the negative influence is waning.

So do you believe there’s room for hope because of these other people and organizations?

With the advent of technology, the internet and the accessibility that more and more people are having, these negative messages can be countered more and more. So I do think there is hope. Things like social media– popular media. There’s no longer a stranglehold over opinion.

Did you have a target audience when writing Arab in America?

I tried not to think about audience because I didn’t want to move in that sort of linear fashion. I tried to think of it more in terms of a journal or a diary. But then there were moments where I felt like I had to explain things. I couldn’t assume everyone would understand it. So it does get a little pedantic. That’s one thing I wish I had balanced, taking the teacher-ly approach and then the more autobiographical one. It goes back and forth. But I was thinking of terms of a subplot within a subplot. The main plot would be my experiences and the subplot would be more of a documentary, an explanation of things… It was a sort of balancing act.

At CAIR Chicago we work with a lot of citizenship delay cases which can be very complicated. In your novel you talked about your journey of becoming a citizen, was it easier getting it compared to some other people?

Compared to other people’s stories it was much easier. I’m sure you’ve heard the horror stories of how difficult it can be. Luckily when my parents came here we got green cards… I had a green card but they lost it,  but I was already in the system, I was a permanent resident so there wasn’t a problem there. When you grow as a teenager and then go to college, you just think yourself as an American. You don’t think ‘I need to do this extra step everyone else doesn’t have to do.’ You don’t think about it until you have to. One of the things that started to happen was every time I applied for a job people were adamant about seeing my green card or my passport, they wanted to see everything.

During my 20s, 9/11 had already happened and I was worried about applying for anything. The thought I had was ‘what if they say no, what’s going to happen, are they going to deport me?’ And I read these horror stories about people growing up in the US who committed a crime, not murder or anything, but small crimes, and they end up getting deported. I was worried because I had been arrested as a young man, nothing major, but I was worried about that. And I was worried because I was politically active, maybe they’re going to hold that against me. I dragged it along as long as I possibly could until I finally said ‘Whatever happens, happens, I’m just going to put the paper work in.’ So I put the paperwork in and it took a year, and it was very expensive. The only hiccup was during the interview. Usually after the interview the interviewer tells you you’re fine, you’re done. But instead of saying that he said ‘Ok this still has to go through an additional step.’ So I had to sit on pins and needles for a few weeks. Then I got the letter in the mail and that was it, now I’m a citizen and can’t be deported… hopefully (laughs).

I had friends and they got jobs. I had one friend who had just come from Scotland, wasn’t even authorized to work. He told me the other day he walked into a Starbucks, applied for a job, and they give it to him right there on the spot. He didn’t even have a social security number, he even told them. They basically said don’t worry about it just come to work (laughs). So I guess all you have to be is from Scotland and you’re good to go. But for me its one experience after another and it still happens to this day…

…One thing that I have done is that I’ve just embraced my heritage and in a way that turns it into a positive and I think that’s the best thing you can do as opposed to changing your name as some people do. Or try to conceal who you are. I don’t think that’s something any person with dignity should have to do. Having the Middle East as your background, there’s a wonderful heritage the comes with that that goes back to the beginnings of civilization. That’s not something to be ashamed of.

There appears to be  a rise in apathy among the younger generation when it comes to politics, do you have anything to say about this phenomenon?

I teach college so I teach young people and I do notice that sometimes there is this distinct apathetic attitude… The way I communicated this to my students and young people in general is saying ‘just because you don’t care or think you don’t care doesn’t mean it’s not going to have an impact on you’. And by the time it does have an impact on you you’re not going to be in a position to respond to it. So it’s better to be engaged and informed as much as possible so the kind of things that do happen in our society can’t happen as easily. That’s the one thing that’s dangerous to any status quo, an informed, educated population.

You already sort of answered this question, ‘how would you combat anti Arab sentiment” you mentioned using art. Is there any other way you would tackle this problem?

Groups like CAIR, or any group that stands for civil liberties and against discrimination are a good means of taking these problems head on. One of the reasons I agreed to do this interview was because I think the kind of work you guys do here is incredibly important. It’s like a check on the sometimes unchecked bile and hatred that comes out of the media. When stuff like this is confronted and challenged with opposing viewpoints it helps stem that flow I think… There are groups in our society, African Americans, Latinos, they have advocacy, they have an organized political response. That’s great and I think every group should have that. I think groups like CAIR and others serve that purpose, and that’s the best thing to do…

A real Arab and Muslim-American hero?