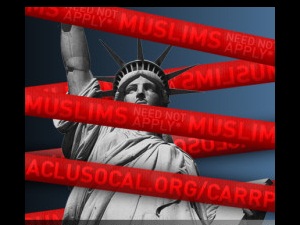 On October 7, 2013, I participated in a panel discussion regarding a report recently issued by the ACLU of Southern California, which uncovers the Controlled Application Review and Resolution Program (“CARRP”) implemented by the U.S. Citizen and Immigration Services (“USCIS”).  The panel was hosted by Mayer Brown LLP, and included presentations from Bardis Vakili, Staff Attorney at ACLU of Southern California; Hamsa Murthy, Associate at Mayer Brown’s Palo Alto office; Jay Readley, Executive Director,  Chicago Lawyers’ Committee for Civil Rights Under Law; and Chuck Roth, Director of Litigation, National Immigrant Justice Center.

Based on materials obtained through Freedom of Information Act (“FOIA”) requests and litigation regarding denials of naturalization applications, the ACLU of Southern California discovered CARRP.  In 2008, USCIS implemented this covert program to “ensure that immigration benefits are not granted to individuals and organizations that pose a threat to national security,” according to materials used to train USCIS officers.  Contrary to this purported purpose, CARRP creates a separate system for analyzing immigration benefit applications based on overbroad terrorist watch lists and mere associations applicants may have with organizations and individuals which U.S. law enforcement views as suspicious.  As the ACLU report reveals, CARRP overwhelmingly negatively impacts the immigration applications of Muslim individuals and those from Arab, Middle Eastern, and South Asian countries.

Muslim applicants for naturalization have become accustomed to extensive delays in USCIS processing their applications since the September 11, 2001 terrorist attacks.  Pursuant to the statute governing naturalization, Congress expects USCIS to process applications for citizenship within 180 days of filing the application.  8 U.S.C. § 1571(b).  In November 2002, however, the U.S. Department of Homeland Security changed the background check process for applicants, requiring the FBI to perform more extensive name check searches in law enforcement databases.  The FBI subsequently revealed that common names for individuals in Muslim majority countries resulted in delays for many of these applicants.

In May 2006, CAIR-Chicago, with Chuck Roth and other attorneys, filed a class action lawsuit alleging that Muslim men faced the most extensive delays in obtaining naturalization.  This lawsuit, as well as others filed across the country, resulted in the FBI greatly improving its name check process, and immigration activists hoped that naturalization applications would no longer be delayed.

CARRP represents the most recent manifestation of immigration policies which discriminate against Muslim Americans.  Under the program, any applicant whose name appears in the Terrorist Screening Database, or who may have an association with such an individual, unindicted co-conspirators, terrorist organization members, or those who provide material support to terrorist organizations, will be subjected to a convoluted process by USCIS.  In a process named “deconfliction,” USCIS relies on federal law enforcement agencies, determining if an individual’s immigration application should be delayed and even accepting input from FBI officials regarding the type of evidence which should be elicited from the applicant.  USCIS will then scrutinize the application to determine if there could be any basis to deny the immigration benefit sought.  If the applicant surpasses this hurdle, USCIS will inquire further into the source of the potential national security concern, and if law enforcement does not verify that the applicant raises no such concern, USCIS will deny the application for any reason that could provide a basis for the denial.

The laws governing naturalization provide no authority for the CARRP process.  On the contrary, the statute only requires sufficient physical presence in the U.S., good moral character, and understanding of the English language, and some knowledge of the history and government of the U.S.  8 U.S.C. §§ 1423 and 1427(a).  The law also circumscribes the “good moral character” requirement, specifically identifying conduct which would contravene the standard, e.g., being a habitual drunkard, illegal gambling, committing an aggravated felony, participating in persecution, and giving false testimony with the purpose of obtaining an immigration benefit.  8 U.S.C. § 1101(f).  Courts have recognized that “good moral character” does not require perfection from the applicant.  See Klig v. United States, 296 F.2d 343, 346 (2d Cir. 1961).

While the language in CARRP documents does not explicitly target Muslim applicants, federal law enforcement targeting of such individuals and organizations since the September 11th attacks ensure that countless Muslim immigrants will be placed in a separate track for their applications compared to most other immigrants.  As detailed in the ACLU’s report, many Muslim naturalization applicants have been denied citizenship based for pretextual reasons, with federal courts consistently overturning these decisions.  CAIR-Chicago also has observed this phenomenon, including for Masoud Nejad andAtmane Bekri, who were denied citizenship for false reasons.  We were successful in overturning these baseless denials.

The USCIS’ more recent barriers constructed for naturalization applicants run afoul of well-established law and standards for granting citizenship, with a disparate impact on Muslim community members.  Contrary to concerns of national security, the affected applicants contribute to the U.S. economy and have committed no crime.  Civil rights activists and immigration practitioners are working to resist the CARRP procedures, and CAIR-Chicago’s Citizenship Delay project remains a vital part of these efforts.