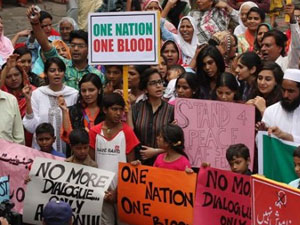 In spite of the recent church bombing in Peshawar’s historic All Saints’ church a little over two weeks ago that left over 85 dead and scores injured, relations between Muslims and Christians in Pakistan seem to remain strong.

A few days ago, between 200 and 300 Christians and Muslims formed a human chain outside St. Anthony’s Church in Lahore. The show of solidarity, organized by Pakistan For All, showcased signs bearing “One Nation, One Blood” and “No More Dialogue…Only Action!” This interfaith effort dismisses the prevalent belief in a violent dichotomy between Christians and Muslims in the non-Western world.

The September 22nd attack on All Saints’ was blamed on the Tehreek-e-Taliban Pakistan (TTP), however they deny any involvement. The attack reignited the debate on whether the Pakistani government should negotiate with the TTP or simply act in aggression. While opinion remains divided, Muslim clerics criticized the Taliban for condoning such attacks despite its alleged non-involvement. The TTP has also been known for inciting attacks against Pakistan’s Shia Muslim minority.

The human chain in Lahore showcases the power of such efforts of solidarity and echoes the dramatic effects on public consciousness that human chains have evoked in the past. In 2011, this image captured during the initial Egyptian uprising of Coptic Christians protecting Muslims as they prayed made rounds via Twitter. This act was reciprocated recently by Muslims praying in front of a Coptic church as an act of protection from militants.

The human chain isn’t confined to Muslim-Christian relations alone. On September 11th, 2013, 370,000 Catalans signed up to take part in a human chain that stretched about 400 kilometers (250 miles). This act sought to honor the 1714 loss of a great battle against Spanish troops as well as put pressure on the Spanish government to instate autonomy to Catalonia.

Catalonia currently functions as a semi-autonomous territory with its own police force, parliament, language, and control of education and healthcare, yet it has not been allowed by the Spanish government to fully secede. Pro-independence Spanish Parliamentarian Alfred Bosch remarked that the occasion “will be an innocent but powerful image to push the process ahead.”

Again in Europe, the Baltic Way, perhaps the largest human chain in history which took place on August 23rd, 1989 in the Baltic Republics of the Soviet Union, was celebrated on its 24th anniversary. The present-day nations of Estonia, Latvia, and Lithuania came together to remember the two million-strong, 600 kilometer (370 mile) joining of hands that resulted in worldwide attention to Soviet occupation.

Based on the Baltic Way, human chains can be seen as important catalysts to real policy shifts and recognition. The peacefulness, human connection, and logistical planning involved in forming these chains highlights the main tenets of democratic change. They respond to aggressive power with sheer numbers and awesome displays of humanity. In Catalonia, it serves as a remembrance of past events as well as a public campaign with eyes on the future. In Pakistan, the show of solidarity is aimed at aggressors at large attempting to cause a schism in a joint society and demands accountability from a government many feel is falling short on its promises.

Unlike marches and rallies, human chains stand resolutely against (and perhaps welcome to) any danger that may make itself known. In these types of protests, it’s all in the hands.