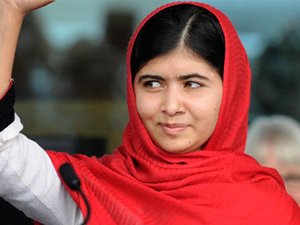 From her 2013 Nobel Peace Prize nomination to the various conspiracy theories surrounding her recent fame, Malala Yousafzai- the 16 year old Pakistani activist who was shot by the Taliban in 2012- has been the center of attention in the media both in the U.S. and Pakistan. Malala is perhaps the first young Muslim woman of color portrayed favorably in U.S. media. But despite the media’s focus on Yousafzai’s educational activism, she also speaks out on more controversial topics such as U.S. drone strikes in her home country.

Her criticism of the strikes comes at the same time as Amnesty International released a new report on civilian deaths from these strikes in Pakistan. Using images and stories from another young girl whose grandmother was killed while picking Okra, I will show that US media portrayals of Malala favor one aspect of her activism over another, and that she is not playing into any special interests but rather is an ambitious young woman who continues to speak on behalf of Pakistani youth despite the threats she is susceptible to daily.

Some have criticized Malala’s rise to the spotlight as a result of her playing into U.S. and British interests in Pakistan. As Assed Baig claims on the Huffington Post,

“… The truth is that there are hundreds and thousands of other Malalas. They come from Iraq, Afghanistan, Pakistan and other places in the world. Many are victims of the West, but we conveniently forget about those as Western journalists and politicians fall over themselves to appease their white-middle class guilt also known as the white man’s burden.”

This analysis has some merit, yet it is important to remember that Malala is sixteen years old; her struggle is very real and grows from personal experiences she had growing up in the Swat Valley and attempting to obtain an education free from violence.  Whether or not Western journalists or political leaders interpret Malala’s story as an excuse for US hegemony worldwide, her own activism and dreams remain well intentioned. We must view her story in a more nuanced manner. Taufiq Rahim writes, as a counterpoint to Baig’s piece on “White Saviourism” , “Is [Malala’s] movement for the empowerment of young girls in Pakistan any less important? Of course not. Criticisms of the West will bring no one closer to emancipation.”

In addition to portraying Malala as a pawn in the US system, critics should remember that terms like the “East” and the “West” are what Edward Said emphasized in Orientalism; merely reflections of human efforts. Reflections of self identification. That engaging in them takes away our ability to create power change for humankind.

One example of Malala’s intentions with her activism and current fame came on October 11, 2013 when she met President Obama and his family in the White House. “I thanked President Obama for the United States’ work in supporting education in Pakistan and Afghanistan and for Syrian refugees,” Yousafzai said in a statement after the meeting. “I also expressed my concerns that drone attacks are fueling terrorism. Innocent victims are killed in these acts, and they lead to resentment among the Pakistani people. If we refocus efforts on education it will make a big impact.”

Her statement proves that she is not playing into US interests or Western ambitions, and her eloquently spoken words show her understanding of the complex nature of the drone program and its outcomes on the people of Pakistan.

There were no reports of President Obama’s reply or reaction to her statements on drones.

A week later, on October 22 Amnesty International released, “Will I be next?” a report on drone strikes in Pakistan.  On the cover of the report is a photograph of eight year Nabeela, granddaughter of US drone strike victim Mamana Bibi. “I wasn’t scared of drones before, but now when they fly overhead I wonder, will I be next?” she explains in the report. This report shows that mainstream human rights organizations are now beginning to investigate and publicly question the US drone program in Pakistan.

Even with the new Amnesty International report, White House press secretary Jay Carney defends the drone program, “ “To the extent these reports claim that the U.S. has acted contrary to international law, we would strongly disagree,” Carney said. “The administration has repeatedly emphasized the extraordinary care that we take to make sure counter-terrorism actions are in accordance with all applicable law.”

While Malala is still relevant in US media and international human rights organizations, journalists should focus on her criticism of the US drone program which she explicitly described to President Obama earlier this month. We should be examining why media is straying away from this critique and only focusing on her activism for women’s education, as noble and important as that cause is- it is very neutral and easy for US and UK organizations to donate to scholarships for Pakistani women to come study in their schools, or to invite her to speak at the UN on the topic of women’s rights. US media are embracing a young Muslim woman’s views on education in Pakistan, but they should also take notice of her criticism of US military policies.