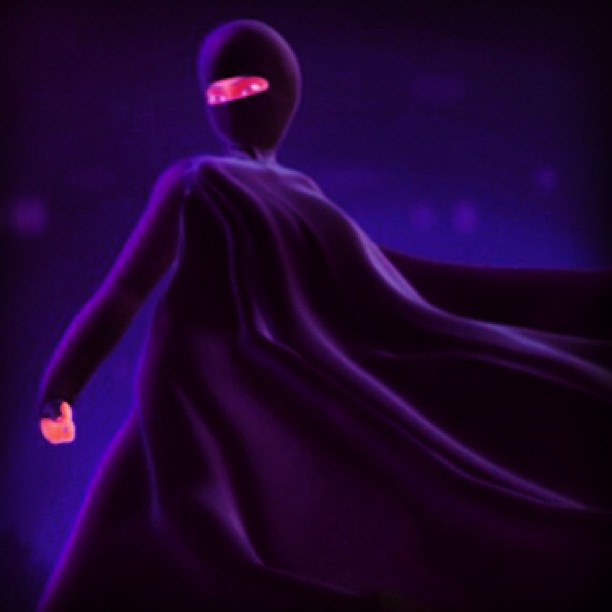 Joining the long list of female superheroes this summer was Jiya, an atypical female in Pakistani society, who fights for equality, social justice, and an end to crime. Jiya is not Wonder Woman; nor is she a vigilante like Cat Woman. In fact, Jiya is the complete opposite of these 1960s comic, women icons.

Interestingly enough, Jiya is not the first superwoman wearing a burka and niqab while fighting villains. In 2002, Soorya Qadir was created by non-Muslim Marvel Comic artists and was introduced into the X-Men series where her mutant powers allowed her to transform into a cloud of dust at any given time. Therefore, the code name given to Soorya became Dust. After a slave trader in Afghanistan tried to remove Soorya’s niqab, she intuitively attempted to protect herself by using her powers to throw sand-like dust at the slave trader to escape. After hearing about the incident, the X-Men traveled to Afghanistan, where Soorya lives, and eventually brought her back to the United States where she became the first niqabi woman to attend the Xavier Institute for Higher Learning.  Soorya and Jiya both represent a new class of superwomen that do not use provocative and commercial outlets to battle their enemies, as Cat Woman and Wonder Woman have done in the past.

The Burka Avenger, an animated series set in the fictional town of Halwapur, is the first of its kind in Pakistan. Reflecting on the work that sixteen year old Malala Yousafzai started, the animated series has become a great advocate for women’s educational rights. This is especially relevant now in Pakistan where girls’ schools are being shut down due to Taliban influence. In a country where the literacy rate is only 40.3% for women, The Burka Avenger is a revolutionary concept.

Not only is the show the first animated series in Pakistan, but The Burka Avenger’s message upholds principles of social justice, educational equality, and empowerment through new developments in technology, research, and outreach. Though The Burka Avenger mirrors domestic events in Pakistan, the show is translated into 18 different languages and is being aired in 60 different countries around the globe, allowing the message of the show to be shared throughout the world.

What makes Jiya, the school-teacher at an all-girls school, a prime candidate to be the Burka Avenger? Using Takht Kabaddi, a fictional type of martial arts that uses pens, pencils, and books to fight evil, Jiya represents a new breed of superhero, one without supernatural powers from the rays of the Yellow Sun (e.g., Superman). Sure, Jiya has near perfect martial arts skills, but she is able to use basic items from her job as a school teacher to defend the girls’ school in Halwapur. Jiya is no Disney princess with a fairy tale love story Instead, she is a relatable character to the young girls of present-day Pakistan—a real life, necessary superwoman and hero where educational resources are being shut down for girls across the country.

Takht Kabaddi is also symbolic because of its unexpected use of school supplies. Just as Malala Yousafzai put her educational background to use, The Burka Avenger also emphasizes that the power of education can truly defeat evil.

Although Jiya acts as the superwoman in the lives of families watching the show, an element of opposition exists. Critics of the show claim Jiya’s burka demonstrates that women can only be productive and successful while being invisible. This highlights the Islamophobic belief of female repression in Islamic countries. However, just as Batman wears a costume to conceal his identity, the burka serves the same purpose to Jiya.

Her burka is also a symbol of the cultural identity of those living in Pakistan. As many women wear the burka and hijab in the Islamic country, Jiya represents the women that don the Islamic attire as their own personal choice—not because they are oppressed or forced. She embodies women who feel empowered to practice their religion. By wearing the burka or hijab, women are judged by their words, thoughts, and knowledge rather than their physical appearance. This is not a sign of oppression, but rather a feeling of freedom for many wearing the Islamic clothing.

Similarly, when Soorya is first introduced with her mutant, supernatural powers, she is fighting for the right to wear her niqab. Soorya is not only a responsible, intelligent, and liberated woman—as many of the Marvel superwomen are—she also wears the Islamic clothing to conceal her identity while battling enemies and practice her religion. Soorya states that, “I never wore it because of the Taliban, mother. I like it because of the modesty and protection it affords me from the eyes of men”.

The creator of The Burka Avenger series, Pakistani pop star Haroon, also states “by wearing a burka she is showing she is a Muslim woman and superhero. And that she stands for all the good things of Islam and the real Islamic values—which are equality, woman’s rights, education and peace—rather than the way Islam has been hijacked by radical elements.”

Another critique claims that the show is alienating and demonizing religious figures and Islamic practices in Pakistan. Typically, the Taliban are seen as Islamic figures in Western media; however, one can contest that Taliban figures are using the religion of Islam for political measures, contorting the religion beyond what it actually encompasses to fit their own political agenda.  Parents of Islamic families watching the show are fearful that their children will lose their cultural and religious identity as they may begin to believe that the villains in the series are portrayed as Muslims, just as the media also places the tag of “Muslim” on Taliban leaders.

However, the values of the two main villainous characters are completely opposite of those taught in Islam. Both Baba Bandook and Vadero Pajero are corrupt local thugs in government rather than decent public servants. Dishonesty and greed are completely against Islamic values and practices. Thus, the villains in The Burka Avenger do not represent true clerics and religious figures in Pakistani society. Instead, they are truly sinful in both a fictional and nonfiction sense.

Jiya and Soorya do not portray Muslim women as oppressed, nor do they rid themselves of rudimentary Islamic ideals. Instead, characters such as Jiya and Soorya represent a completely groundbreaking type of superwoman that has never been done in the past. The Burka Avenger is a revolutionary concept in Pakistan, aiming to better use technology and resources to educate the international world about social justice issues plaguing a country in turmoil; moreover, the image of Jiya as a superhero has broader effects on the sexualization of superheroines in mainstream Western culture. Using a nonconformist approach to being a superhero, Jiya has become a figure that literally teaches the importance of the pen and how it is mightier than the sword- and sex.