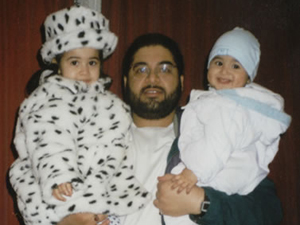 Shaker Aamer, a Saudi national, was captured in Afghanistan back in 2001 while engaging in humanitarian work. After he was captured he was tortured in Bagram, and later in Guantanamo, where he was transferred. He has now been imprisoned without charge or trial for 11 years.

Initially the US justified Aamer’s capture and imprisonment under the pretense that he was helping the Taliban, but no formal charge was ever made. In 2007, Aamer, along with a handful of other prisoners, was cleared for release. Six years later and his release is yet to be made.

But Aamer is not the only one being tortured.  His family, a wife and two kids, have suffered alongside him. Aamer’s British wife, Zinneera, and their two children, were only recently allowed to talk to Aamer via webcam. This was the first time Aamer’s son, now 10, had ever seen his father. According to an article published by the Independent, Aamer’s wife suffered from depression and mental episodes since his arrest in 2002.

In January of this year, Zinneera wrote an open letter for Cage Prisoner, a human rights organization that raises awareness on the prisoners still trapped indefinitely in Guantanamo. In her letter she wrote,

“Sometimes it feels like life has frozen and I can’t seem to see myself escape from what I feel. The times we shared, although it was only 5 years into our marriage, will forever be cherished. It all feels like a dream. Shaker not being here has had a very big negative impact on our life as a family. I have had to handle his responsibilities as well as mine, and this causes me a lot of stress. I am grateful that I have my family, and his family for support, but there is only so much one can do…”

Zinneera adds that her husband was at the wrong place at the wrong time, restating that he was in Afghanistan to help with humanitarian aid.

“Shaker was there to help the poor in Afghanistan, but he himself became the victim of injustice. When I think about it, it saddens me deeply… Children have a right to be with their parents; this is a basic human right. My children were attached to their father and him being removed from their life is a total injustice.”

The British government has openly spoken for Aamer’s release, and he is currently represented by lawyers at the Birnberg Peirce and Co law firm. Human rights organizations, including Amnesty International, have also called for his immediate release.

11 years after his capture support for his release has only grown. Earlier last year British singer-songwriter PJ Harvey released a new song, her first since releasing her Mercury award winning album Let England Shake in 2011. The song titled “Shaker Aamer” was written to raise awareness of Aamer’s plight.

PJ Harvey’s song paints a haunting picture of Aamer’s experience in the infamous prison, which President Obama has vowed to close on several occassions.

“No water for three days.
I cannot sleep, or stay awake.
Four months hunger strike.
Am I dead, or am I alive?
With metal tubes we are force fed.
Strapped in the restraining chair.
Shaker Aamer, your friend.”

British comedian Frankie Boyle donated 50,000 British Pounds ($80,265) to Aamer’s legal fund, money which he had won in a libel action law suit against the Daily Mirror. Boyle also publically went on a hunger strike to highlight the hunger strike that Aamer and fellow captives had organized.

According to the Independent, Aamer has lost 40% of his body weight from his hunger strikes. He has also suffered a number of health problems. Solitary confinement has not helped. In a heavily censored letter to his family, he wrote that although he is only 41 he feels he is 50 and he finds it painful to write.

“I got arthritis, eye problems,” wrote Ammer “my hair has fallen, my heart is aching.”

In some letters he has made drawings for his children. Despite his health and the suffering, he remains positive and tells his family to do the same.

“He encourages me to be strong, and carry on, and that he will be home soon,” writes his wife. “I keep on hoping and waiting for the day that justice will be done to my husband and my family. Life is very challenging, but I keep telling myself that he will be home soon and everything will be ok, but it isn’t, and the sadness and the misery has been accumulating for 11 years. My children ask me ‘Mum, are we the most suffering family in this world?’ I feel so helpless and I wish I could do something to change our situation.”