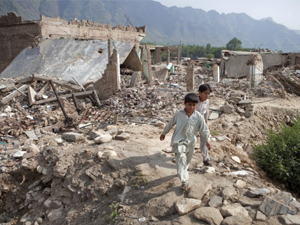 In late 2012, Pakistani schoolteacher Rafiq ur Rahman, heard a drone fly overhead. He had never before given it much thought, until a missile landed near his home, killing his 67-year-old mother Momina Babi and injuring his three children. Rafiq and his family’s story is not unique, and many in his home region of Waziristan in Pakistan have told similar stories. The difference is that Rahman’s story was told to a panel of U.S. Senators.

On October 29th, Rafiq ur Rahman and two of his children, nine-year-old daughter Nabila Rahman and 13-year-old son Zubair Rahman, made an appearance on Capitol Hill to recount their horrific experiences from the strike and plea to a panel of only five senators to end unmanned operations in Pakistan. This journey was made possible by Congressman Alan Grayson (D-FL) who has been a staunch critic of the U.S. occupations of Iraq and Afghanistan.

Rahman voiced his frustration of his experience to the Guardian:

My three children – 13-year-old Zubair, nine-year-old Nabila and five-year-old Asma – were playing nearby when their grandmother was killed. All of them were injured and rushed to hospitals. Were these children the “militants” the news reports spoke of? Or perhaps, it was my brother’s children? They, too, were there. They are aged three, seven, 12, 14, 15 and 17 years old. The eldest four had just returned from a day at school, not long before the missile struck.”

The Rahmans’ visit marked the first Congressional hearing of drone strike victims from Pakistan since the program was launched in 2004.

The Rahmans’ journey, however, has not been an easy one. The original briefing, scheduled for September, was postponed due to the State Department declining Shahzad Ahkbar, the family’s attorney, a visa into the United States. Ahkbar, who was originally issued a US diplomatic visa, has since faced trouble entering the United States on multiple occasions. He says this is due to his investigation into the US drone program.

“Before I started drone investigations I never had an issue with US visas,” he says.

Ahkbar’s travel restrictions have caused him to miss speaking engagements at a human rights conference in Washington and a “Life Under Drones” conference at NYU.

While human rights groups continue to accuse the United States of breaking international law and committing war crimes for the killing of civilians in Yemen and Pakistan, little attention has been given to these supposed covert operations. The U.S. continues to defend drone strikes as necessary for national security, despite the overwhelming instance of civilian causalities (i.e. “collateral damage”). Amnesty International has reported that 900 civilians have been the victim of drone strikes, a far higher number than previously thought.

Brian Becker, an anti-war activist, has been highly critical of the lack of congressional action on the disputed legality of drone strikes. Regarding the death of Momina Babi, Becker told Russian-based news network RT:

“What we see with this shocking case of a 67-year-old grandmother in her garden with her grandchildren is the direct targeted victim of the drone attack. In other words the missile hit her directly, blew her apart and then a second attack against her surviving family members when they came to the scene.”

It is interesting to note that in the case of Momina Bahi and her family, a second attack quickly followed the first. When this method, known as the “double tap”, is employed, the victims of the second strike are largely first responders to the initial attack. Double taps have been known to target funerals as well.

NYU student Josh Begley has been actively tweeting every instance of drone attacks on his twitter stream. As Business Insider reported in December 2012, Begley’s aggregated information uncovered the double tap, which is largely regarded as a war crime. The Department of Homeland Security has reported that this method of attack is often a favorite of terrorist organizations.

With many voicing critiques of drone strikes and their consequences, there is a hope that a solution can be reached. Rahman and his family, however, feel their voices are falling on deaf ears.

“No one ever asked us who was killed or injured that day. Not the United States or my own government. Nobody has come to investigate nor has anyone been held accountable. Quite simply, nobody seems to care.”

Thousands of Chicagoans March for Palestine