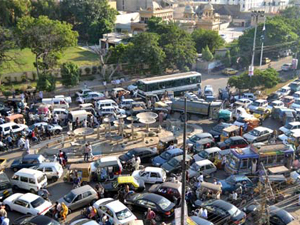 A recent article by Murtaza Haider in the Pakistan-based publication Dawn highlighted the blight of cities in Pakistan due to their rapid, unplanned urban development and wrong-headed urbanization schemes.

There are no easy solutions to Pakistan’s urban problems. Decades of poor planning and inability to accommodate large amounts of refugees date back to conflicts in previous decades. During the partition in 1947, 1.8 million refugees fled into Pakistani cities, increasing the population by 6.3%. By 1951, 48% of the urban population in Pakistan were Indian refugees.* During the conflict in Afghanistan in the 1970s, the populations of Peshawar and Quetta experienced growth due to an influx of refugees. These two cities were previously unaffected by sudden growth during the partition.

What these population increases have in common is the growing need for city infrastructure to accommodate more people. Due to recent events in Pakistan, including violence and natural disasters, the refugee population occupying cities has grown further. Add this with advanced medical practices, eradication of certain diseases, and the exponential nature of population growth, and you are left with a situation that can quickly spiral out of control.

Lebanon is another nation facing similar urban issues to Pakistan. Lebanon became one of the largest havens for Palestinian refugees following the end of the British Mandate in 1948 and the subsequent creation of Israel. These refugee camps have been around for about 60 years and have grown organically with the country. This growth has caused refugees to move about, some remaining in camps while others migrated to already-established urban centers.

According to Mohamed Kamel Doraï, a researcher at the National Center for Scientific Research (CNRS), 50% of Palestinian refugees in Lebanon live in United Nations Relief and Works Agency-run camps. The other half are city-dwellers. This distinction has become blurred, but is made by the United Nations High Commissioner for Refugees for the sake of policy implementation and division of resources.

Many Palestinian camps have become urban centers in and of themselves or have been absorbed into cities due to how long these camps have occupied their host countries. These refugee camps often utilize urban infrastructure such as schools, shopping malls, and friends’ houses even though they remain geographically segregated.

The Mar Elias is one of these Palestinian refugee camps. Located southwest of Beirut, it was established by the UNRWA in 1952 and has since nestled itself into the suburban fabric. Mar Elias now lies in the middle of four Beirut suburbs: Bir Hassan, Ouzaï, Ras Beirut, and Cola. Though a physical difference can be seen, the geographical space between Lebanese citizens and refugees has all but disappeared.

While Pakistan and Lebanon’s problems are many, there is a refugee situation gaining more media attention. The Syrian Civil War has become a prominent topic due to the massive scale and brutality of the conflict. Of the over 2 million refugees that have fled their Syrian homeland, 500,000 have made their new, hopefully temporary home in Jordan.

The Zaatari refugee camp houses 120,000 of these half-a-million refugees. The camp was originally outfitted for 60,000 people, but it has far exceed that capacity. The overcrowded settlement now contains 25,000 shelters, 10,000 of which are sturdy mobile home units. The rest are flimsy, makeshift tents. Open since July 2012, operations at the settlement are costing the Jordanian government $1 million per day.

It is worth mentioning that increases in urban population almost always lead to an increase in strain on resources and an increase in violence. According to the UNHCR, it was reported that half of all refugees in the world are crowding cities. This further exacerbates violence, often the result of social differences and outright prejudice. The strain on humanitarian workers also increases, as refugees spread out and access to them becomes difficult. Numbers of refugees in any given city are always skewed, as many are afraid of identifying themselves for fear of discrimination or deportation.

This raises questions as to the future of camps such as Zaatari as well as other camps in Jordan. Will the urbanization issues facing Pakistan and Lebanon extend to Syrian refugee camps in Turkey, Jordan, and the Kurdish region of northern Iraq? Will intellectuals of the world hold a conference ten or 20 years from now discussing the poor urban models of cities in these refugee host countries? It is too soon to tell.

Despite these questions of the future, pressing questions still face the present. With no end to the Syrian Civil War in sight, and with camps filling up at an alarming rate with diminishing resources, it is hard to tell what the future holds for the 120,000 residents of Jordan’s newest city, The Zaatari Refugee Camp.