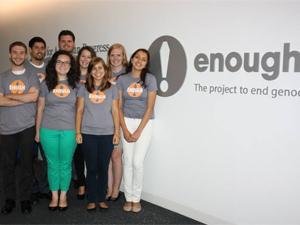 This summer, I was privileged enough to have interned at a non-profit called the Enough Project in Washington DC. The Enough Project is a human rights organization committed to documenting and combatting human rights abuses in Central Africa, namely in Sudan, South Sudan, and the Democratic Republic of the Congo. My experience as a policy intern undoubtedly refined my research and writing skills, but perhaps more importantly helped me understand the importance of bearing witness and responding to mass atrocities around the world as a young Muslim activist.

Human rights abuses in Sudan have been occurring under the leadership of President Omar al-Bashir for decades; not only have their been two brutal civil wars, but the secession of southern Sudan in 2011 has centralized power in the hands of a brutal Khartoum regime even more, at the expense of those at the periphery. South Sudan continues to face continued intercommunal violence and disrupted access to humanitarian aid. The Democratic Republic of the Congo is home to what many describe as the deadliest war since WWII, with over 5.4 million dead. The Congo has an abundance of natural resources, though it is incredibly underdeveloped and fraught with sexual violence, poverty, and corruption. Learning about the inner workings of these conflicts was incredible – it was the first time I could see the human rights narrative meld with policy and data.

The Enough Project is a non-profit within liberal policy think tank Center for American Progress, which has an absolutely phenomenal internship program.  About 100 students from schools across the country with differing majors and interests all came together this past summer to learn how to promote progressive, equitable, and socially just policy. My meeting, interacting with, and learning from the intern cohort was an incredible learning experience, and helped me restore faith in my generation.

In my short time at the Enough Project, I worked under experts who had done everything from document mining and extracting violations of conflict minerals found in cell phones and laptops in the Congo, to responding to a chaotic South Sudanese dissolution of government. Examining human rights issues in the legal and policy spheres resonated well with my understanding of the Islamic view on fundamental rights; such as the rights to life, respect, justice, and freedom. These principles are all emphasized in the Qu’ran, and reflect an Islamic view that precedes present-day notions of human rights and international law.

This past summer, I came to learn how important it is for Muslims to become a part of organizations that seek to preserve and honor human dignity. One of the most important passages from the Qu’ran for me concerns our duty to know and respect others while discarding perceived difference:

“O mankind, We have created you from a male and a female and have made you into nations and tribes for you to know one another.  Truly, the noblest of you with God is the most pious. Truly, God is All-Knowing, All-Aware.  (Quran, 49:13)

The Prophet Muhammad’s (PBUH) teachings and actions demonstrate how important human rights activism is, and how in a world increasingly interdependent and disparately privileged, grassroots intervention and protest is obligatory. His words “My lord has commanded justice” should and have served as a guide post for those seeking to make more sense of the world, so that they may help alleviate suffering and inequality.

His assertions that no race, ethnicity, or tribe was superior than another, “There is no superiority for an Arab over a non-Arab and for a non-Arab over an Arab; nor for white over the black nor for the black over the white except in piety. Verily the noblest among you is he who is the most pious” address very important issues such as race relations, privilege, and institutionalized power in our nation and around the world. Conversations on these topics should be had in Muslim communities so that we may not only hold ourselves accountable but also demand justice wherever others are stripped of it.

We are reminded again and again of the power of sadaqah, or charity. We add change to donation boxes at the grocery store, and offer a ride to prayer or school. Using our voice and our character to empower those who are in dire physical straits and those who are barred from their right to protest injustice is, in my eyes, the greatest thing one can do for another.